Preparing Your Trashcan Lid for Nachos

Food safety comes first, y’all. It’s kind of common sense, but I’m going to say it anyway. USE A BRAND NEW TRASHCAN LID. We’re going for novelty, not food poisoning. Just like everything else in my life, I ordered my trashcan lid with Amazon Prime. Shopping in my jammies rocks. Here is the one I bought.

But feel free to hunt through the hardware stores; they sell them there, too. When you order, make sure you are buying a size lid that will fit in your oven. It’s the little details, I know.

Next, you have the option to perform surgery on your lid (or not.) Removing the handle from the lid will make it lay flat, but if you’re not that industrious, you can just as easily stabilize your lid on top of a bowl after it comes out of the oven. You’ll need fewer trivets for the hot pan that way, too. 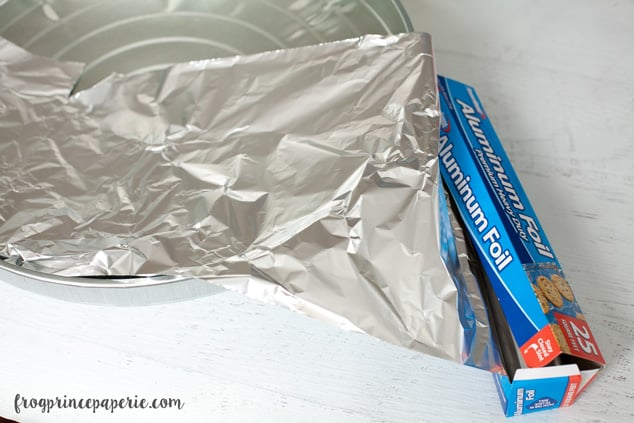 Before you put a single nacho in your trashcan lid, WASH IT. And then just to make double sure it’s a clean eating surface, cover the trashcan lid  in aluminum foil. The foil will also help with clean up. I can’t imagine it’s fun to scrape cooked on cheese off of one of these lids. Now you’re ready to make the hit of the party! 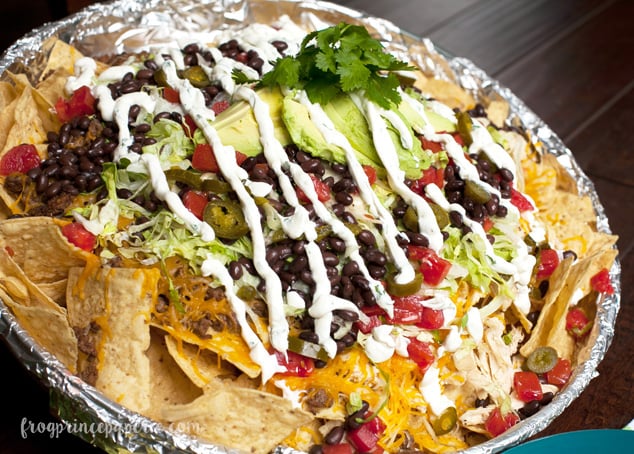 Don’t be scared of the ingredient list here, it’s mostly fresh seasonings to make a taco-style ground beef to go on the nachos. We made ours half beef half chicken, but you can double one or the other to cover the whole nacho plate if you want.

First thing, prepare your trashcan lid. Cover it in foil for easy clean-up and food safety.

Preheat your oven to 400 degrees. Brown your hamburger meat over medium with the onion, cumin, chili powder, paprika, salt and garlic powder until completely cooked through. Remove from stove and drain if there is any excess grease.

While you’re browning the hamburger, you can quickly whip together the cilantro sour cream sauce. Melt the cream cheese in a small bowl the microwave for 20 seconds or so. You just want it melted enough to where it will easily combine with the sour cream. Add the sour cream to the melted cream cheese along with the lime juice and chopped cilantro. Stir together until thoroughly combined. To get a nice drizzle when you put the sour cream sauce on the nachos, I recommend putting the sauce in a ziploc bag first and cutting a corner off to pipe it on your nachos.

To start building your nacho masterpiece, spread the tortilla chips evenly over the trashcan lid. We’re going to put on all our hot items first. Add your shredded chicken and seasoned beef. Cover with cheese. Pop in the oven for 6-10 minutes to melt all that cheesy goodness on top.

Remove from oven, then top with black beans, lettuce, avocado, tomatoes and cilantro sour cream sauce…and anything else you may want to put on to make your nachos extra yummy! 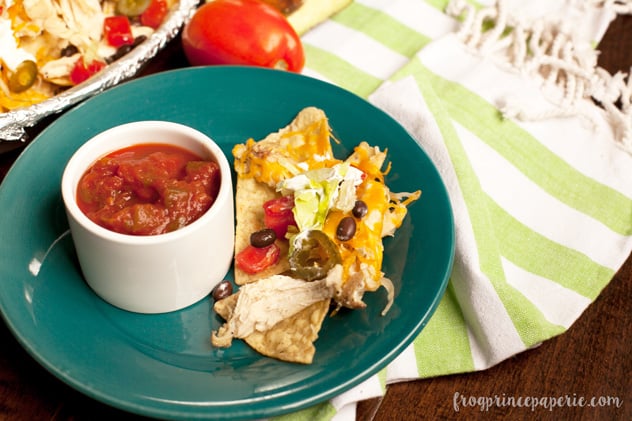 We made this batch of nachos a week or so before the game…and I have heard every single day this week how much the kids want to have it again Superbowl Sunday. I did serve a bowl of salsa alongside the dish. I think they’re just better that way. 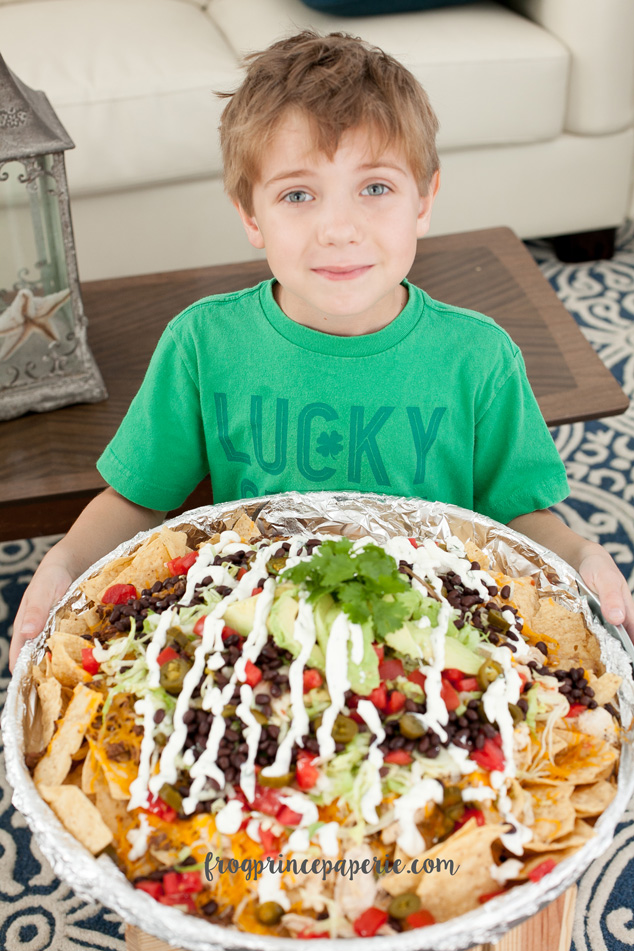 Here is my reluctant 6-year old model posing with the trashcan lid nachos just for a size comparison. Not as cute when he doesn’t cooperate. The tray is also pretty heavy; there are a few pounds of food piled on.

For your next football game day or large casual gathering, whip out your trashcan lids and get cooking! It’ll be the wow-factor of the party! Party Activities for the Teenage Crowd

This cracked me up! But you're totally right - there's no better way to serve nachos to a crowd! Thanks for linking up with Merry Monday :)

This is so unique, but I can see that it would be perfect for a crowd -- better than the small tray I usually use. Thanks for the inspiration! :)

Shut up this is such a great idea. My mom used to make them on a pizza pan, but since there were no sides, she couldn't "stack" them. SO smart.