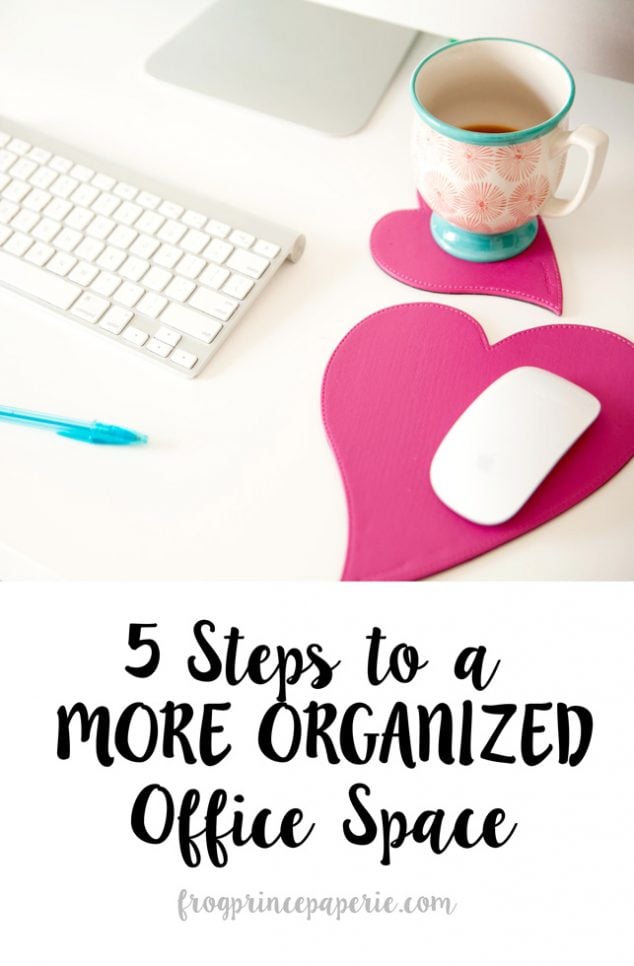 I am the reluctant owner of three glue guns, seven pairs of scissors, three bone folders and more tissue paper than one person should be allowed to have at any given time. Why? Because, my friends, I am extremely disorganized. When I can’t find my supplies, in desperation, I buy a replacement set. Then I lose the replacement, and get desperate again. It’s a vicious cycle.

Not that I am proud of it, but I sent in a few pictures of my wreck of an office to the Good Housekeeping Spring Cleaning Organization Challenge and they chose me. Right away. My office was so bad, they said I needed professional help STAT.

Which I guess in the end was pretty cool because 1. Someone told me exactly what to do to clean up my mess and keep it clean and 2. I have a lovely office to work in now, and the creative juices really do flow much better now without all the clutter! Huge kudos to Amelia Meena, my professional organizer consult from Appleshine for whipping me into shape. Chatting with her was like having my own personal organization trainer!

On several levels, I was really surprised by what she told me after I told her all about my bad “organization” habits. Mostly that we were going to work WITH my habits instead of come up with a new system for organizing so that I’d actually use all the good advice she was going to give me. I’ll break that down for you later, but first, I want to show you my terrible mess, um, office space.

Glorious, right? Wouldn’t you want to work in here every day? 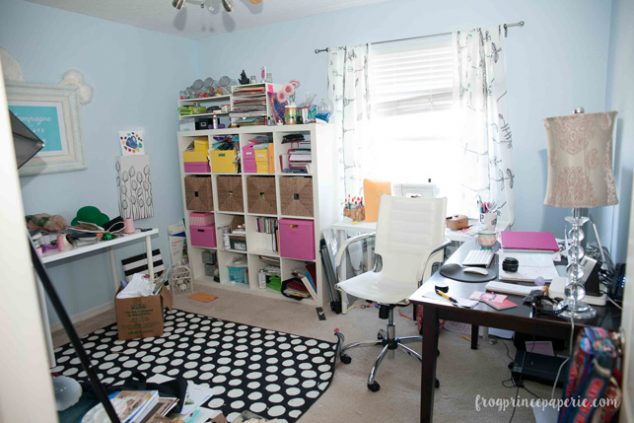 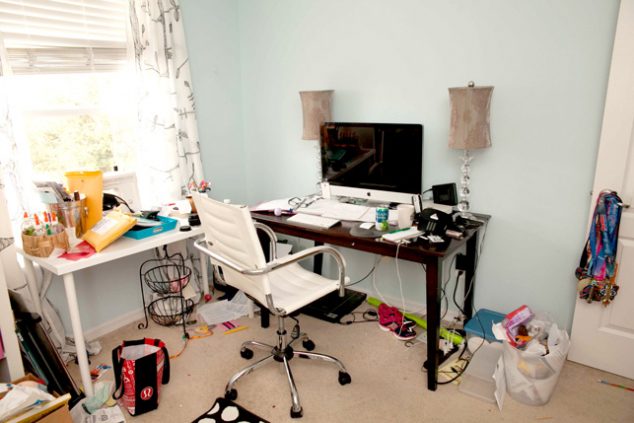 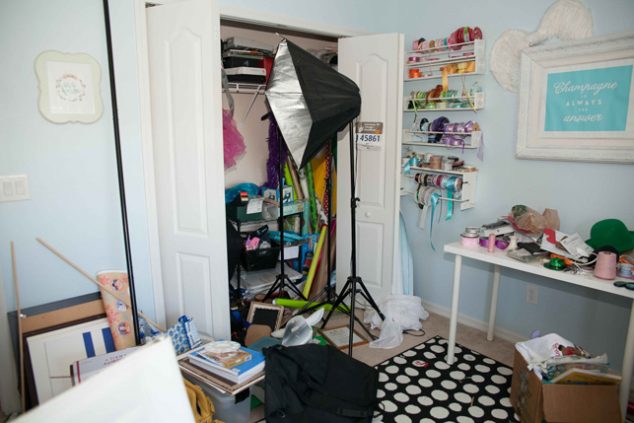 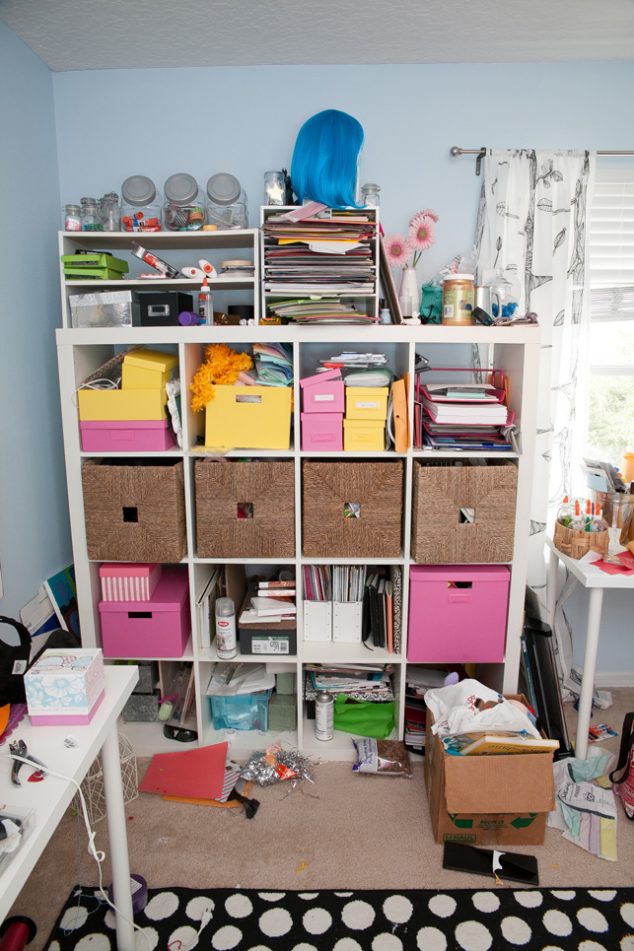 Now that I’ve organized, these pictures actually make me cringe a little.

After finishing a party, shoot, or any other project, I have a habit of “cleaning up” by dumping everything in a box and hauling everything up to my office to deal with later. Or not. Some things had been in there since before Christmas waiting for some attention. All those boxes? Stuffed full. The closet? Yowza. Make sure you tie a rope around your waist before you venture in. I pretty much only made sure I had a clear path through the office to get to my desk.

Amelia came through for me (my hero!), and helped me clean up the messiest space in the house. 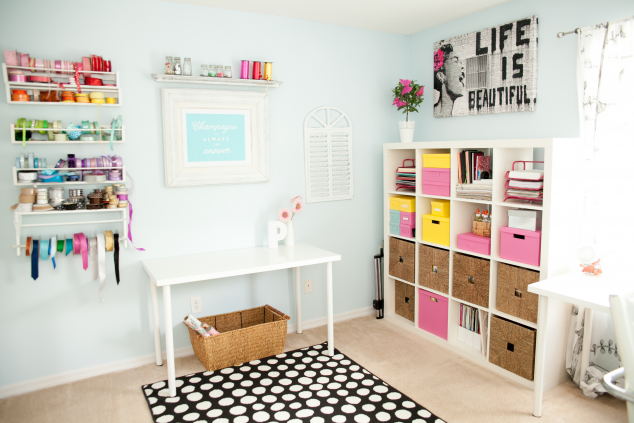 5 steps to an Organized Office Space

Amelia of Appleshine says, “Organization is a series of habits.” So, if changing the way you do everything is the way you go about organizing, you’re likely to fail at keeping it up. If you design yourself an organization system that works with you instead of just getting a bunch of new holders for things, you’re more likely to be a success.

Also, Amelia highly recommends taking a project of this proportion and make it bite sized. Do one thing at a time, one or two hours at a time until it’s done. Just one step at a time. Like this:

Before you do anything, decide general locations for where your things are going to go.

In my case, we decided everything paper related was going to go in the Expedit (white cubicle shelves from Ikea), crafting stuff was going on the wall and the closet was going to be for my photography equipment and wrapping paper horde. I ended up tweaking this in the end, but started out with this general idea.

That’s right. No organizing per se, yet! I took the whole mess in my office and put it all back into all the spaces I already had. This was clean up effort #1 for those of you who like to keep count. I went all in and even vacuumed! And really, I wanted to stop right there, but I carried on…

3. Move any furniture into place.

Once you start organizing, you’ll want everything to be in its final resting place. You need a structure for your organization. Amelia recommended I use one of my smaller white tables for my desk instead of the big (former dining room) table I had. I fought her on this a little bit, but in the end she was right. The smaller table does not allow me to do my usual sprawl…there isn’t much room for extra stuff on my desk besides my calendar and a daily to-do list. 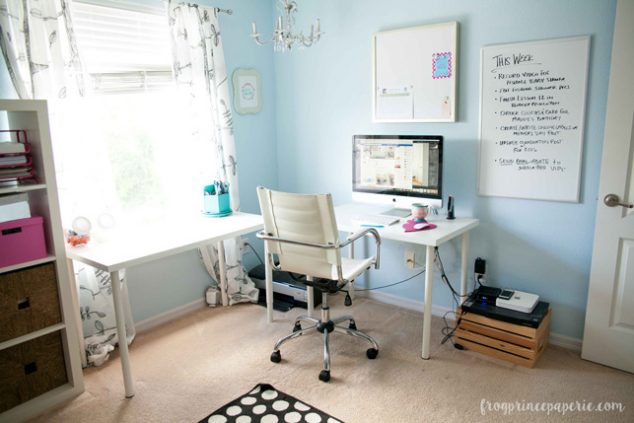 She also had me put up a pin board for mood board type inspirations and anything that I need to reference repeatedly right above my computer. A new white board with a running to-do list for the week/month went beside it. 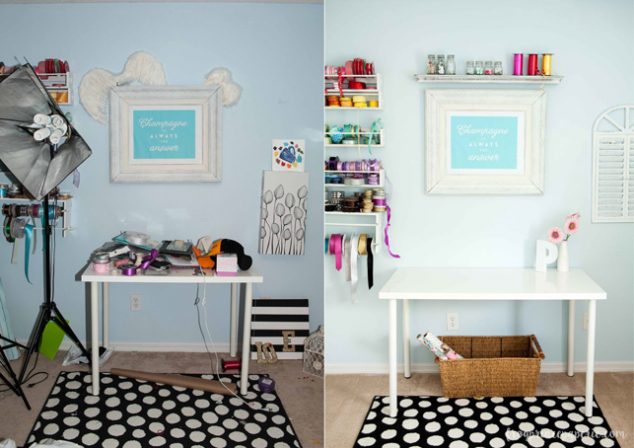 I ended up with a new slightly larger white table (but smaller than the dining room table) to replace the old one because I actually do use all three tables in my office. I moved the scanner and routers to a temporary crate beside my desk instead of under it. I got rid of the lamps on my desk as well. (They were really only there because I was too lazy to go to the store to replace the lightbulb in my overhead light.)

Things were easy in the organizational game until this point. The next part was really killer, but effective!

Do this one area at a time. This was really painful. After I cleaned up the whole office and I could see the floor again, I had to undo that work bit by bit. 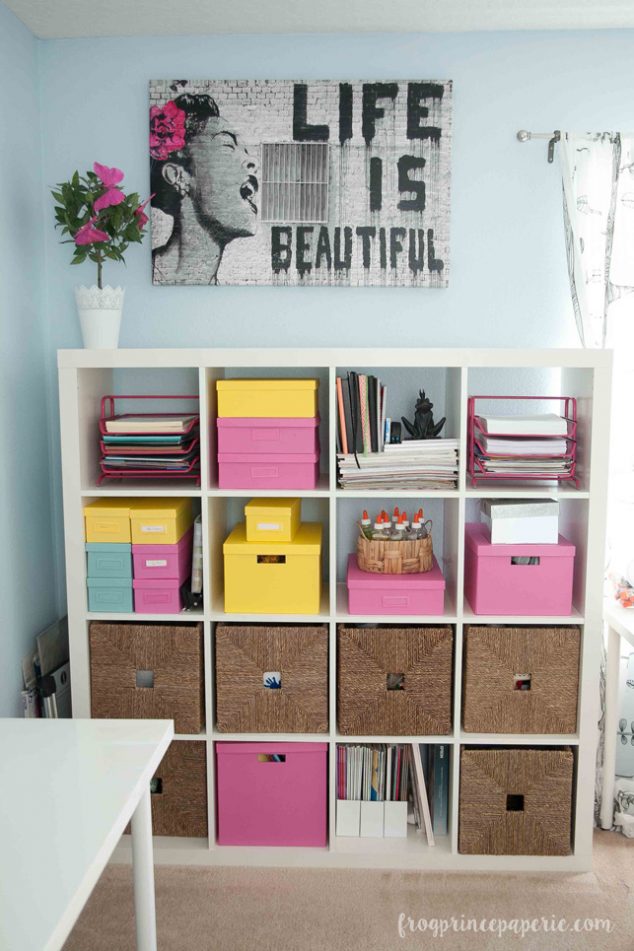 First, I took apart the Expedit. All the boxes came out. I was instructed to keep the top of the Expedit clear–nothing on it at all as clutter up there will make the space feel like it’s caving in. And then a forced purge happened. Bits and pieces of crafty things found their way to the trash and donation to the elementary school art teacher, with much fewer pieces than I thought going back into boxes. Turns out I didn’t need to keep that plastic star I used in a party 5 years ago.

The closet was done after I finished the Expedit completely; I cleaned it all out and found much of the paper I was hoarding in there had been damaged and not good for anything anymore. Collection cut!

This is where what I think of as organizing began. Putting everything back, but putting it into a system.

Some things Amelia of Appleshine advised when reconstructing:

Another few things that went into reconstruction. 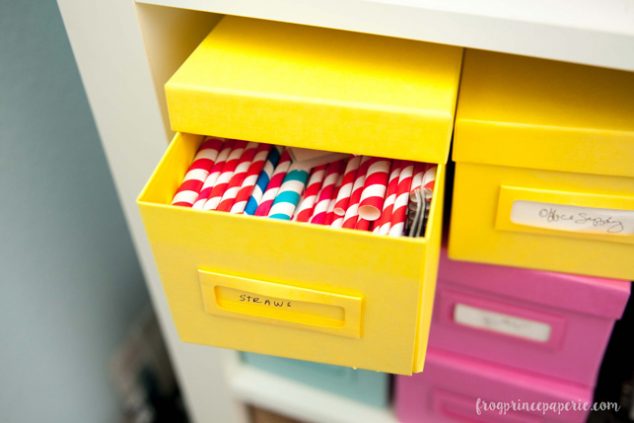 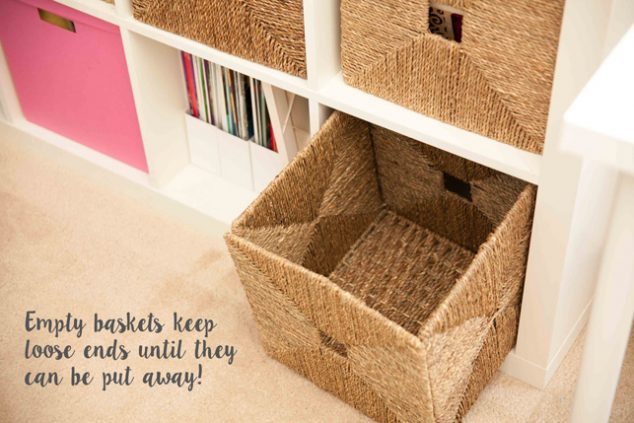 I did put up shelves as she recommended, but in the end, I decided I wanted to feel like I was in an office, not a craft room, so I purged more of my craft supplies and fit them into the Expedit or in the closet in designated spaces. 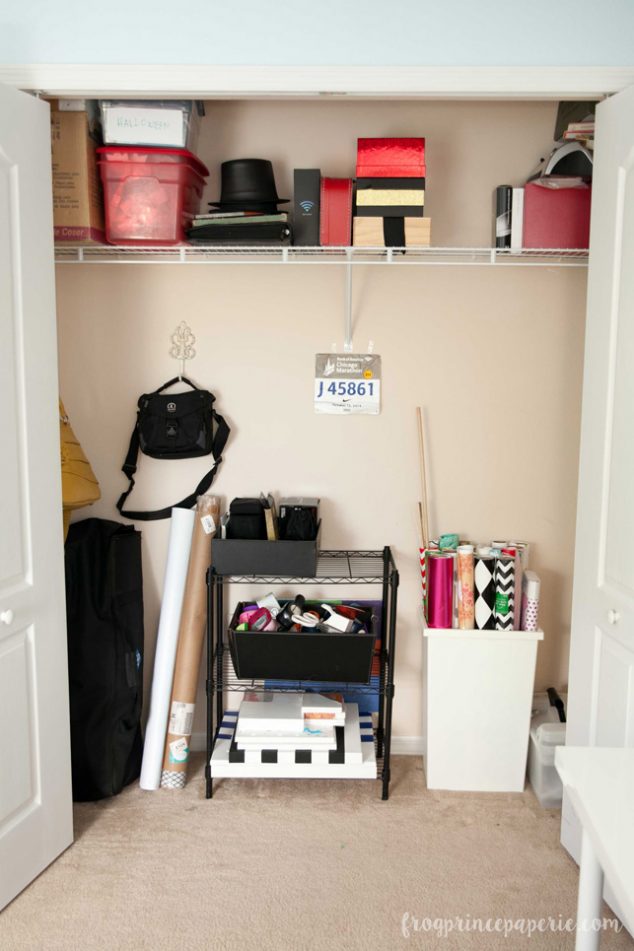 The closet is still a work in progress. I have a taller shelving unit to put in, but I’ve put up hooks for my photography equipment and found a trash can to fit all my kept wrapping paper in. It’s already looking tidier!

Amelia of Appleshine says that most of us who have already attempted to organize likely already have much of we need to create good organizational systems. I was surprised that I was going to be able to accomplish most of our plan without going to buy anything new.

If you’ve got yourself a mess you’d like to dig out of, I’d highly recommend giving Appleshine a call. Also, I really loved reading her recent post “9 Lies You Tell Yourself About Organization” – a good, quick article! Look her up:

I know you’re likely to be far more organized than I am–but if you’d like to make me feel better about my mess, I’d love to hear about yours. If you’re a superior organizer, any tips you’ve got are equally welcome in the comments below!

Wow! I love your clean and organized office! I really need to get working on my own! Hope to see you again at #HomeMattersParty

I think it would be so great to have a "professional" to help you sort out what you need, etc. Everything looks great and accessible. Well done!

Wow this is a transformation and I bet the energy and creativity flow easily. My unorganization is really bad and I wish I could consolidate everything in one room. The bulk of my "stuff" is spread out in the basement . I know I need to purge but I can't bear to part with the nifty flowered dishes, candlesticks and vases that I have amassed over the years while thrifting. Then there's all the holiday/theme stuff and baking equipment. Calgon take me away!!

Sandra, I feel I should really mention my garage after cleaning and organizing this room. It's the other place I keep my "stuff." We have a two car garage...just don't ask how many cars actually fit in there :)

Can't believe it is the same place. Good job! Hope you can keep it that way, because it is true, the mind works better in an uncluttered space.

Whenever I waste a day, I know that it is time to clean and tidy up. hahahaha

That's because it's assumed, lol!