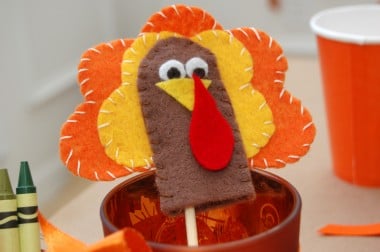 My kids played and played and played with these cutie patootie Thanksgiving turkey finger puppets for hours after I made them…you would have thought they were some fancy toy with lots of lights and bells and whistles. But no, just a few scraps of felt and thread and lots of childhood imagination happily at work. I totally admit these turkeys aren’t an original idea–I was surfing the net and spotted them, and couldn’t find my way back, so I designed my very own version of them. Thank you to whomever it was to put the idea in my head! 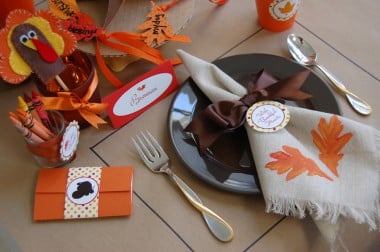 They were made as part of the kid’s Thanksgiving table…and in my household, they’ve since been hidden so they are exciting again come Thanksgiving day! 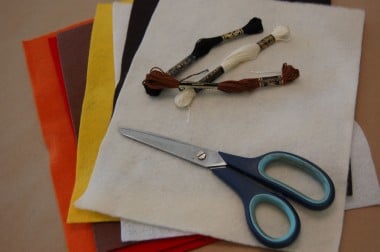 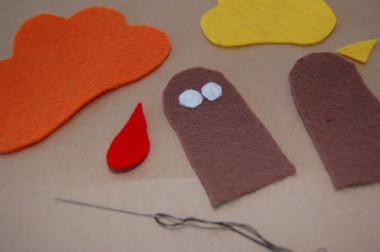 After you print out the turkey finger puppet templates, cut them out and trace them on to the appropriate color felt. Cut your shapes out so you’re ready to sew! 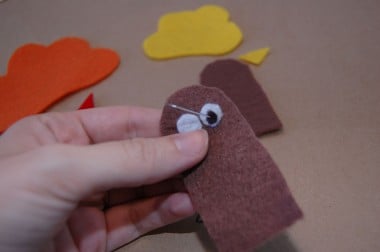 Stack the black pupil on top of the white eyeball and place on one of the brown finger pieces for the turkey’s face. Using the black floss (I use a double strand), tack both the eyeballs to the brown felt. 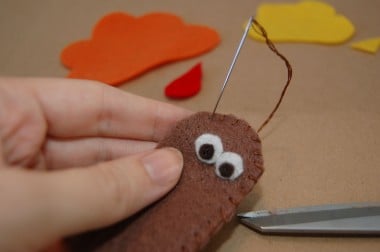 Stack the two brown pieces of felt together, eyeballs out, and whip stitch them together using the brown floss. Make sure you leave an opening at the bottom for little fingers! 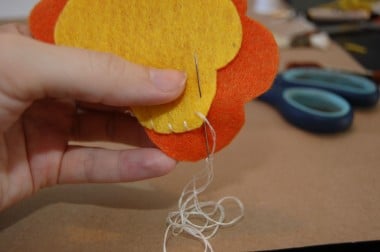 Stack the yellow feathers on top of the orange, lining them up at the bottom. Using the white floss, whip stitch the two pieces together. I didn’t put the needle all the way through the felt when I tacked these together so the floss wouldn’t show up on the back. You could also glue the pieces together with some extra strength glue, but for little {destructive} hands, I think a little thread and some super easy sewing will make these a tad more durable. 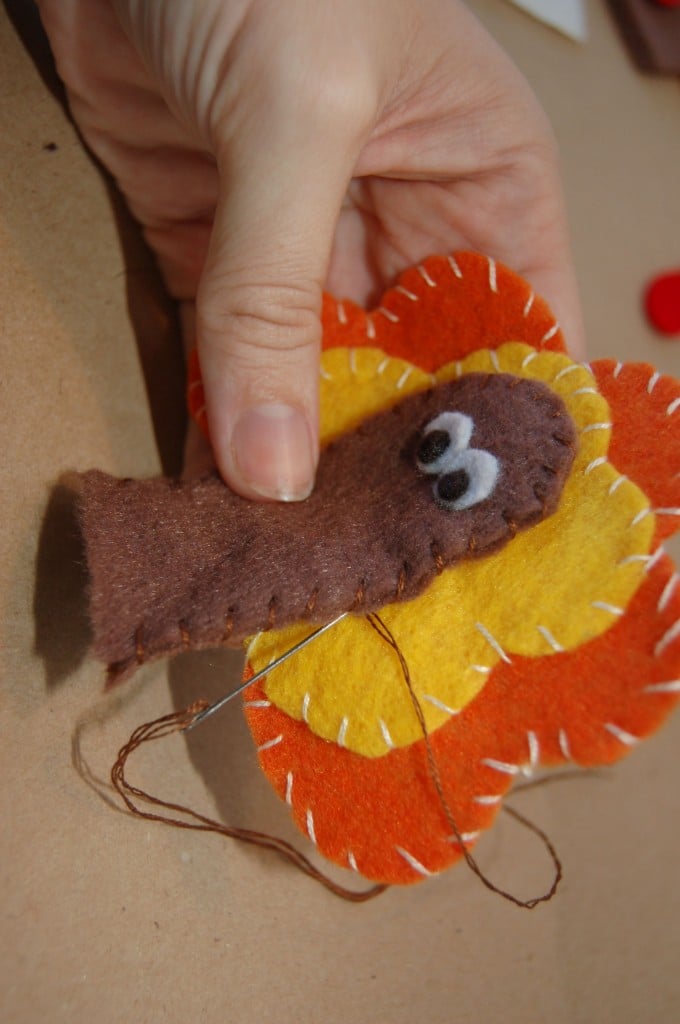 After I stitched, the yellow to the orange, I quickly bordered the orange with the white thread to make it look a little more finished…but this is optional!

Next, center your brown sewn together piece on your feathers. Using an “invisible stitch” (don’t put the needle all the way through the felt!), tack the brown finger pouch to the feathers. 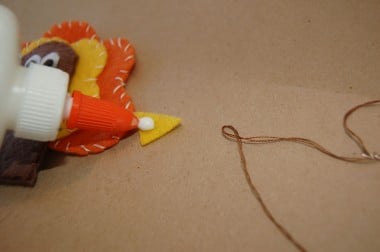 Using a little (ok, a LOT) of glue, glue down the beak and then glue the waddle on top. Let this dry thoroughly, or you’ll quickly end up with a beakless turkey! 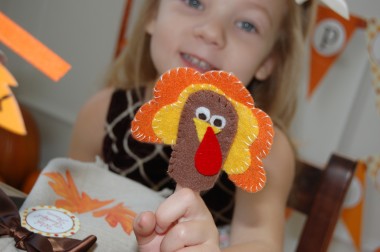 Find your favorite person and let them give the turkey finger puppet a test-run. They’ll thank you for it! What a cute idea for finger puppets! We had to include it in our post on music ideas for Thanksgiving! https://raisingcreativechildren.net/fun-music-ideas-for-thanksgiving/

I found and pinned this project recently and today I made my first puppets - one of them looks a bit drunk as his eyes wiggled a bit out of position, LOL - that just adds to his charm ;) Our Canadian Thanksgiving is next weekend, so I mailed them to a niece for her 3 year old son, and will be making more for the rest of the kids in the family - thanks for such an adorable idea and tutorial!

That is so awesome! And I am completely in love with crafts with character. They are my fav. :) Enjoy thanksgiving!

I also wanted to let you know that you've been featured on my blog today! https://www.artsyfartsymama.com/2012/11/pinteresting-features-n-shtuff-57.html