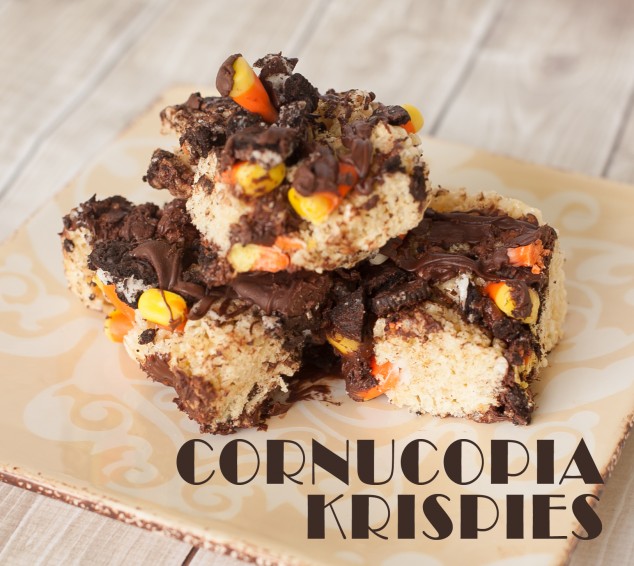 It happens every time. You wait until the last minute to put together something cute for your kid’s class party, and you are bound to get a big, fat FAIL. And fail Idid! These turkeys were oh-so-cute on Pinterest, but did not reach their full potential in the least.

After about an hour of working at this, there was a little army of sad, sad looking turkeys on my counter. The recipe looked so easy! But the candy corn didn’t want to stay put in the rice krispie treats. Or on the chocolate. 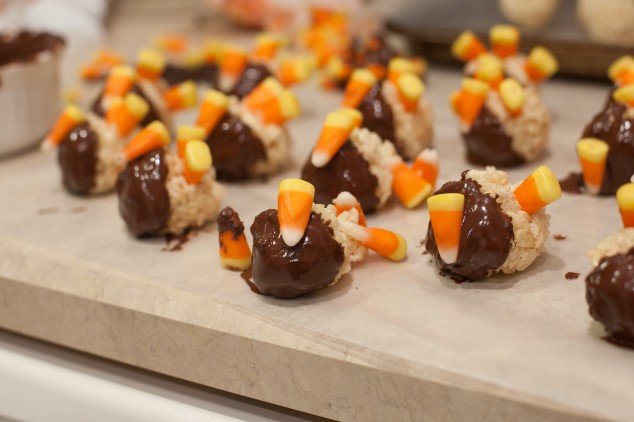 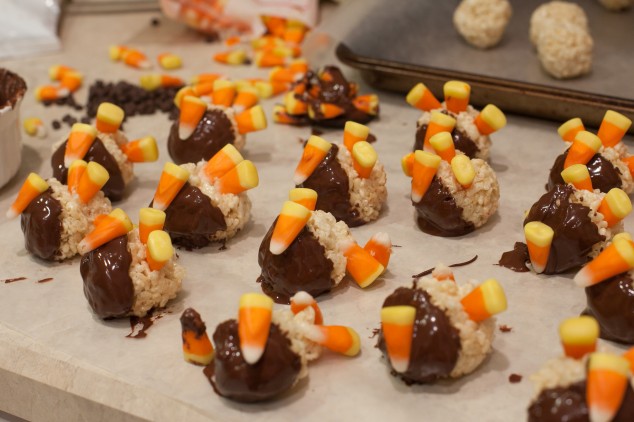 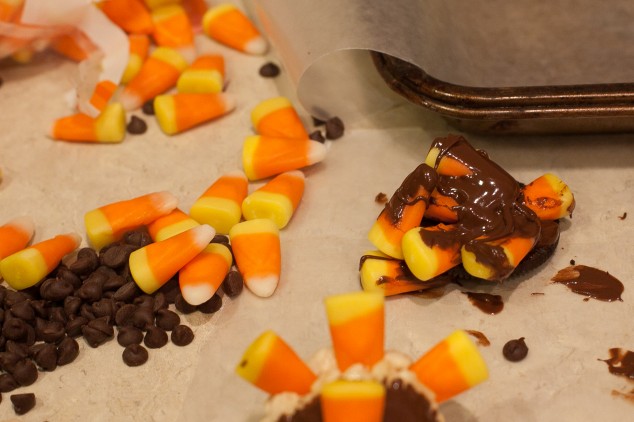 So I changed approaches and tried to use an oreo. Fail as well. I ended up with a chocolatey mess of candy corn and melted drizzle all conveniently piled on half an oreo cookie. But it looked so EASY!!

All you’re supposed to do is roll up the ball, dip in some chocolate and pop in the candy corn. Uh-huh.

After my husband declared them “dead soldiers” and started popping them off the wax paper and into his mouth, I decided to wave the white flag. He’s not a crafty guy, but he can spot a crafting tragedy from 100 yards.

Problem was, the turkeys LOOKED awful, but tasted fabulous. Meaning, a different approach was in order. I took all those turkeys, rolled up balls, melted chocolate, candy corn and mangled oreo cookies and pressed them into a pan. 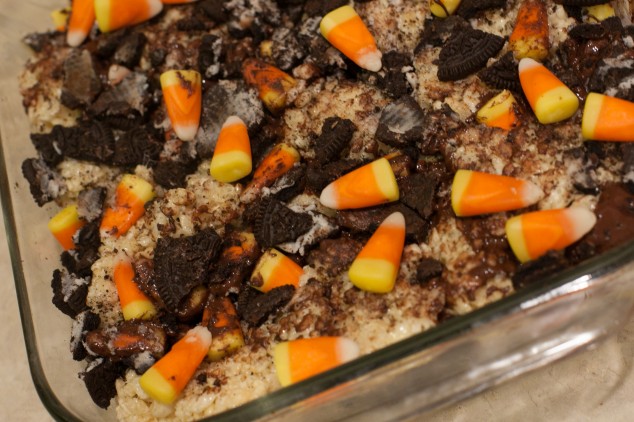 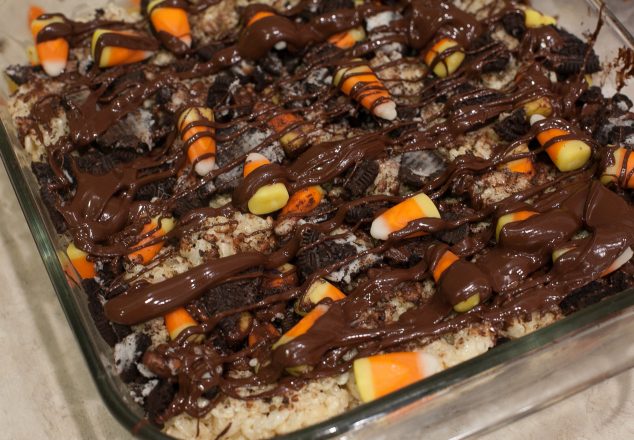 Kind of like making lemonade when all you have is lemons. Pinterest fail turned ok. Not the most beautiful dessert, but it tasted great! It was originally named “turkey casserole,” but my husband was the only one who thought that was funny. He humors me, though. 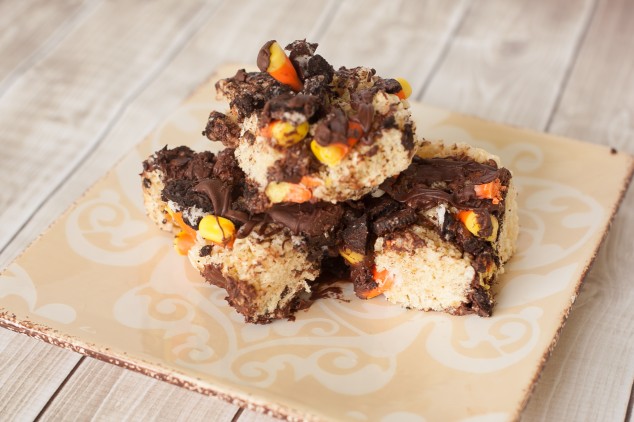 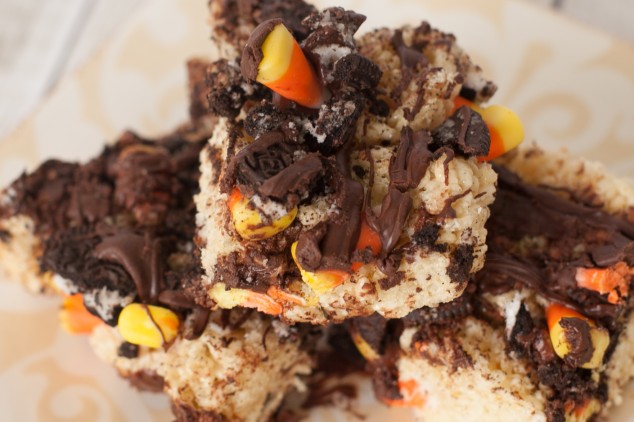 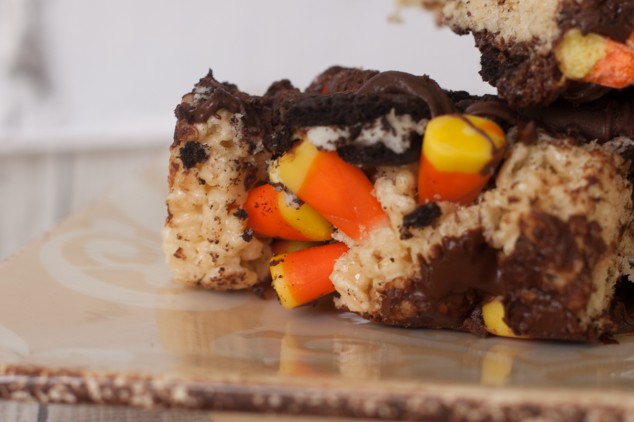 I didn’t end up bringing these to the class party. Thought they might induce a sugar coma or two, so I sent them to the ER where I suppose they are equipped to deal with it if anyone goes into sugar shock. (Also, Emergency Room staffs are notorious sugar junkies.) A much healthier paper bag turkey filled with popcorn went to the classroom, and I believe was greeted with lots more oohs and aaahs than my failed turkeys would have. And the bonus? I started putting this turkey together at 12:15 for a 1pm party. 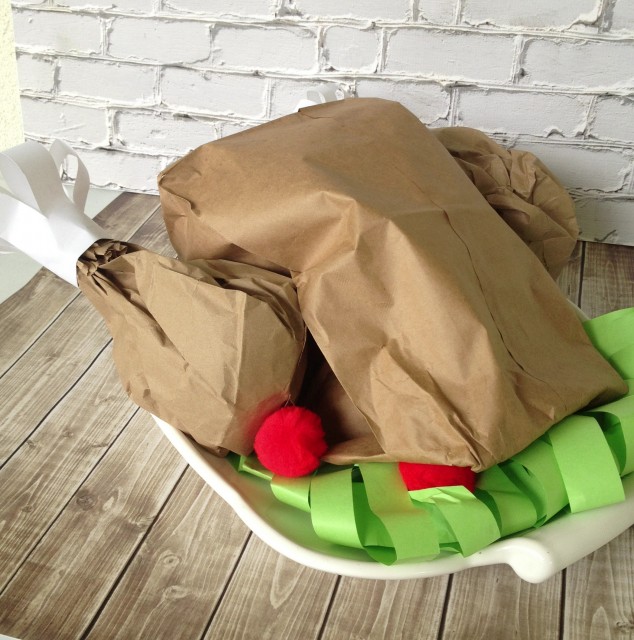 I have had so many fails from waiting until the last minute. Love your lemonade and the popcorn turkey!

Oh boy, can I EVER relate! But, like you said, you've gotta think "lemonade" when given lemons, so your turkey casserole will make one of the funnest memories of this Thanksgiving AND you got accolades for the paper bag/popcorn turkey replacement - yay!!!!

oh no! LOVE the popcorn idea tho!