Thank you TRANSFORMERS for sponsoring this post. Join us in celebrating their 35th anniversary!

It’s hard to believe, but TRANSFORMERS is celebrating its 35th anniversary this year! Things have changed in the world of the Autobots and Decepticons since I was a kid, but it’s really cool that they are still around and still have legions of little (and big) fans. 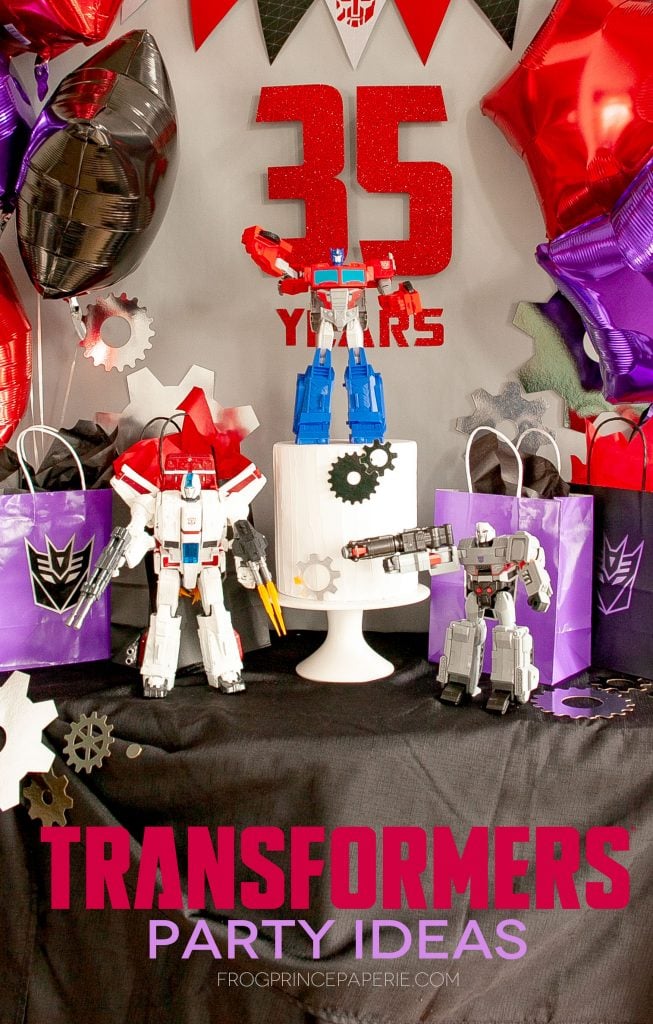 Probably because there’s MORE THAN MEETS THE EYE when it comes to these toys.

Boys and girls alike in our house were pretty excited to see all the Transformers toys show up. They could barely keep their hands off of them long enough for me to snap a few pictures! 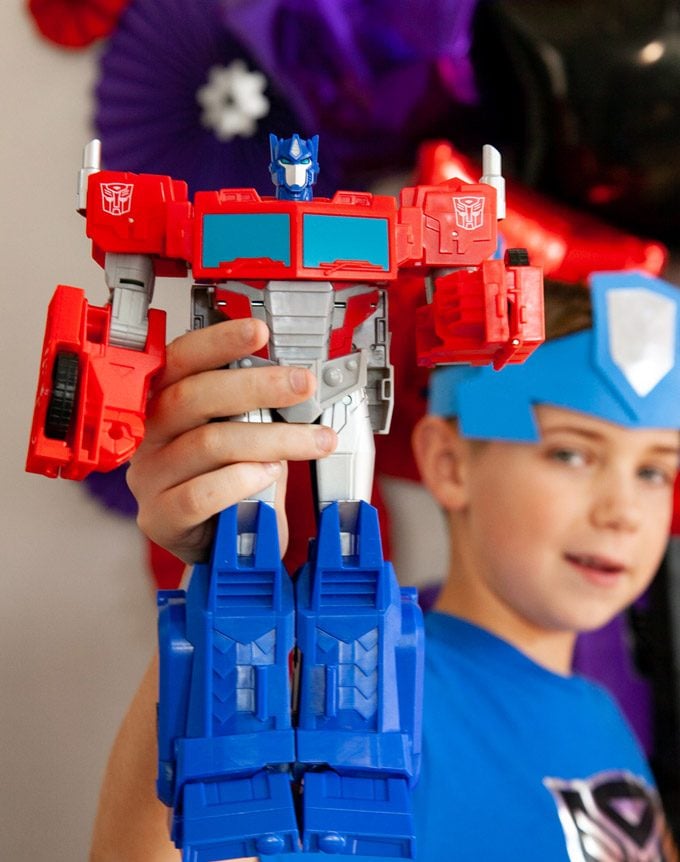 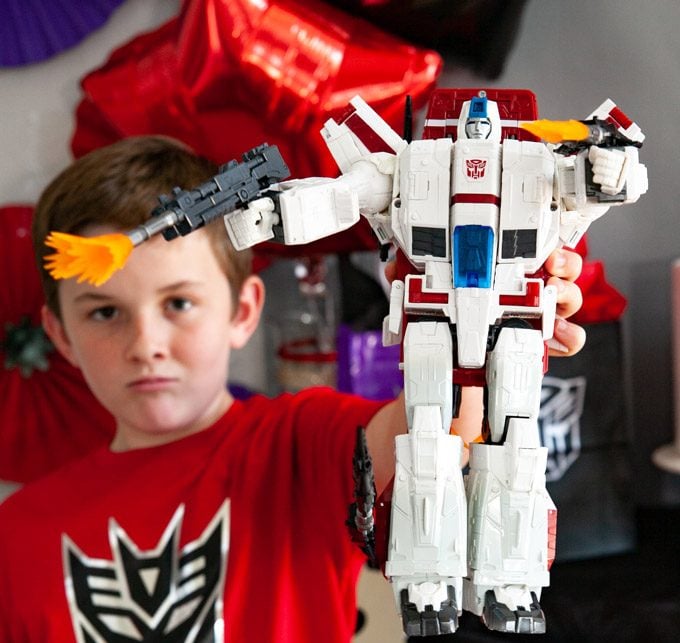 It’s kind of fun to see them get so excited about something that we loved when we were kids. (Not going to lie, I did spend some time turning Optimus Prime into a truck and back again. It’s just as much fun now as it was a few decades ago, by the way.) 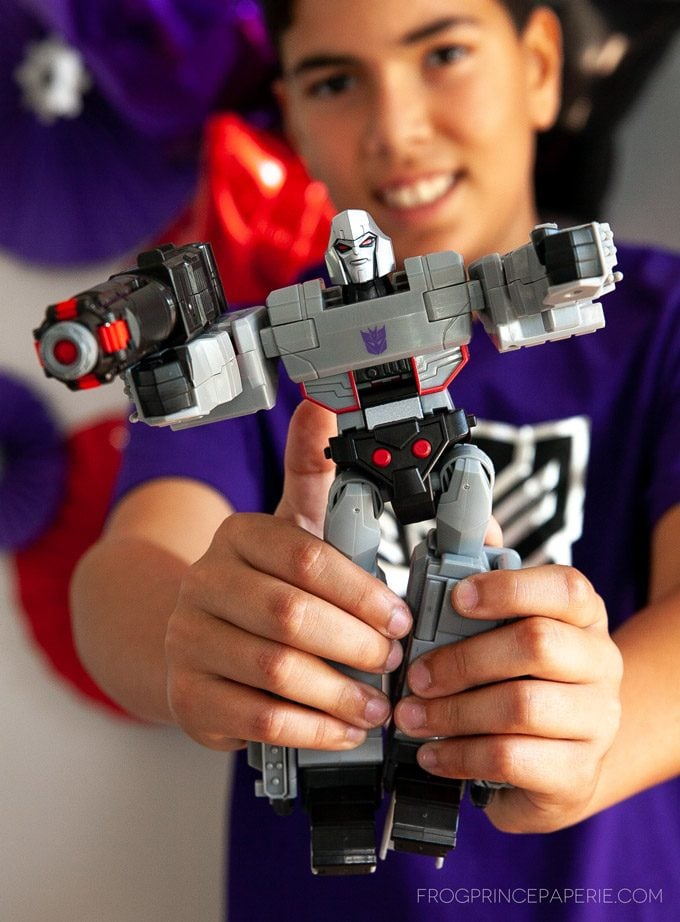 The cast of characters in the TRANSFORMERS universe has gotten bigger and better over the past three decades, but it’s still got the same good vs. evil theme and convertible toys that are pretty amazing. Who DOESN’T love a robot that converts into a vehicle??

This anniversary celebration, of course, calls for a few Transformers party ideas!

Every party needs a focal point–like this colorful display for our anniversary party cake. The Transformers toys were perfect decorations.

PRO TIP: When you are doing theme parties with children’s toys or children’s shows, a fantastic way to decorate is to find an actual toy or plush to decorate with. You get the character into the decorations and the child has something to play with after the party. 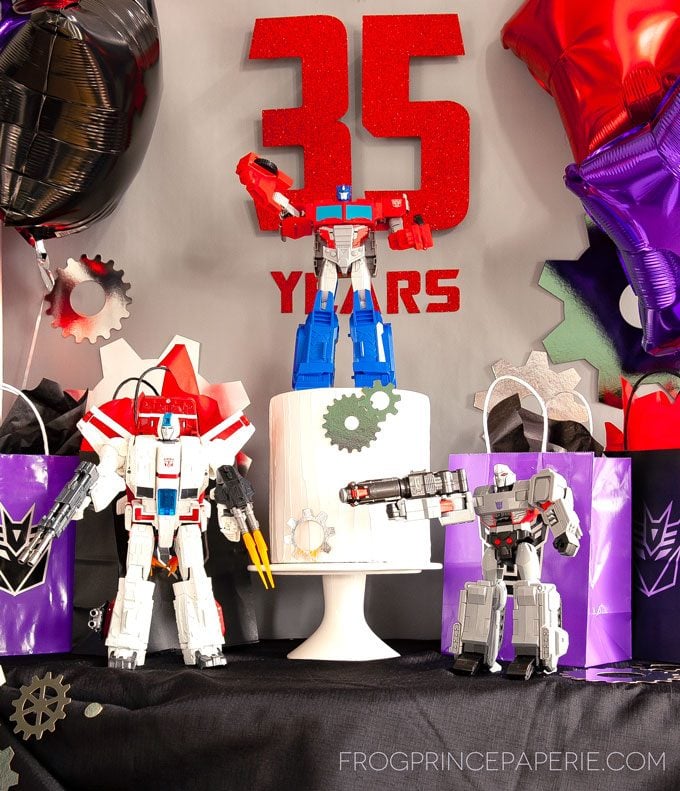 A few layered tablecloths set the base for the cake table. I added a backdrop of grey bulletin board paper that you can pick up at any craft store.

Balloons filled in much of the space on our Transformers party table while adding a lot of wow factor.

PRO TIP: Pick up balloons at your local dollar store type place. They are inexpensive decorations that get a lot of bang for your literal buck. 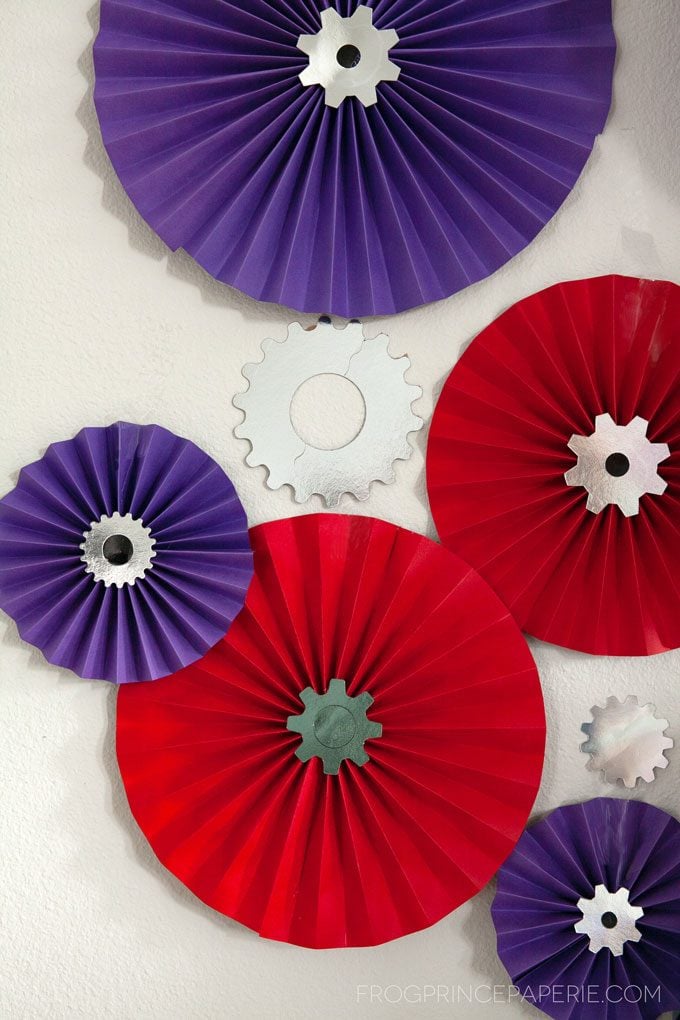 Paper fans in various sizes with cut out silver metal gears gave our Transformers party table a little industrial flair. If you have a cutting machine, these little gears are super easy to make! 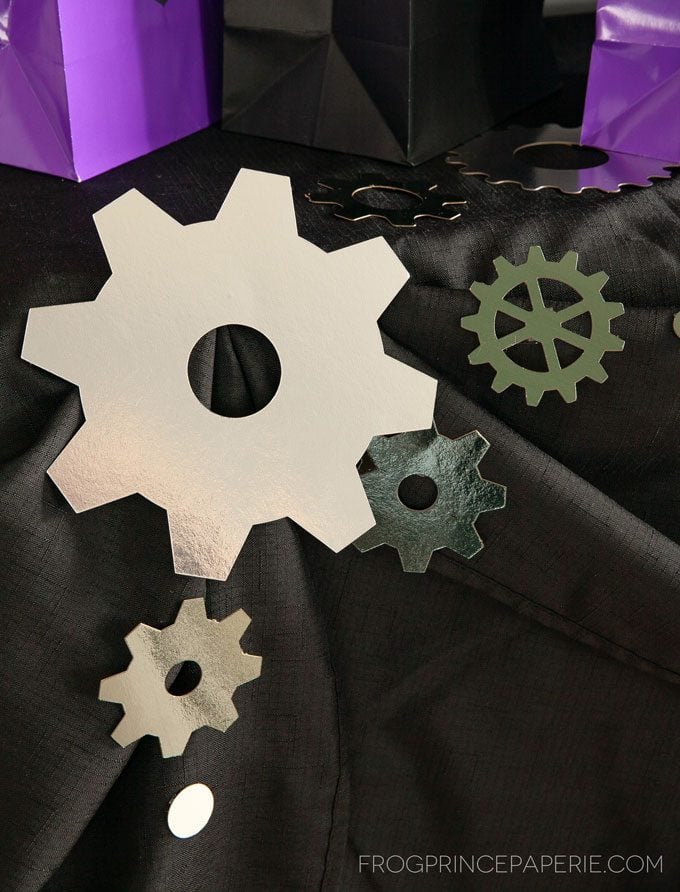 I also used a cutting machine to put “35 years” for the 35th anniversary of  TRANSFORMERS on the backdrop. If you’re using this idea for a birthday, just change the number and stick it to your paper backdrop like in the picture!

It’s TRANSFORMERS 35th anniversary, so we celebrated with some really great DIY party favor bags for our guests. I used my cutting machine to cut out some vinyl Autobot and Decepticon shield images, then put those images on black and purple party bags.

They ended up being the perfect decoration for the cake table. 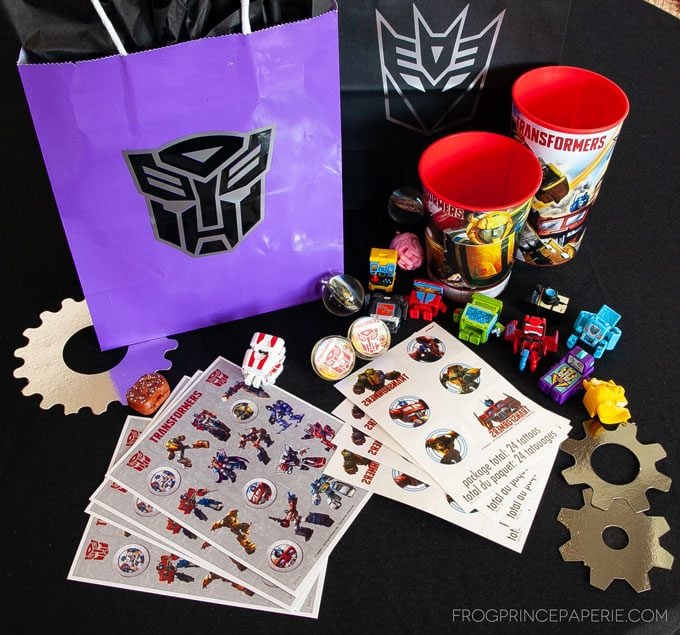 PRO TIP: Having a designated bag for each kid at a party helps everyone get their things home. Every kid can claim one, then stick any crafty project completed or prize won in their bag to take home without losing track of it during the party. 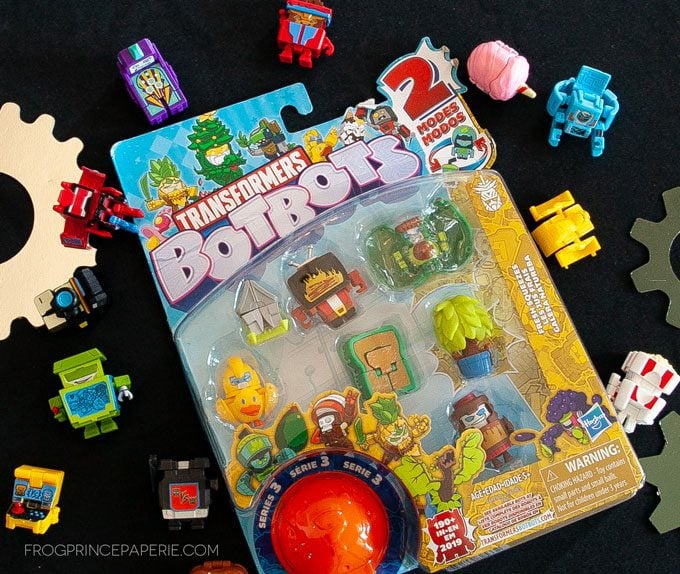 The favorite item in the favor bags were a few of these Transformers BotBots toys. I admit, I got a huge kick out of them, too!

They’re collectible toys; tiny robots that look like everyday items…a sandwich, a suitcase, slice of pizza, arcade game, and on and on. They’re all pretty funny. Perfect for popping in bags of party favors.

And supposedly up to constant mischief! 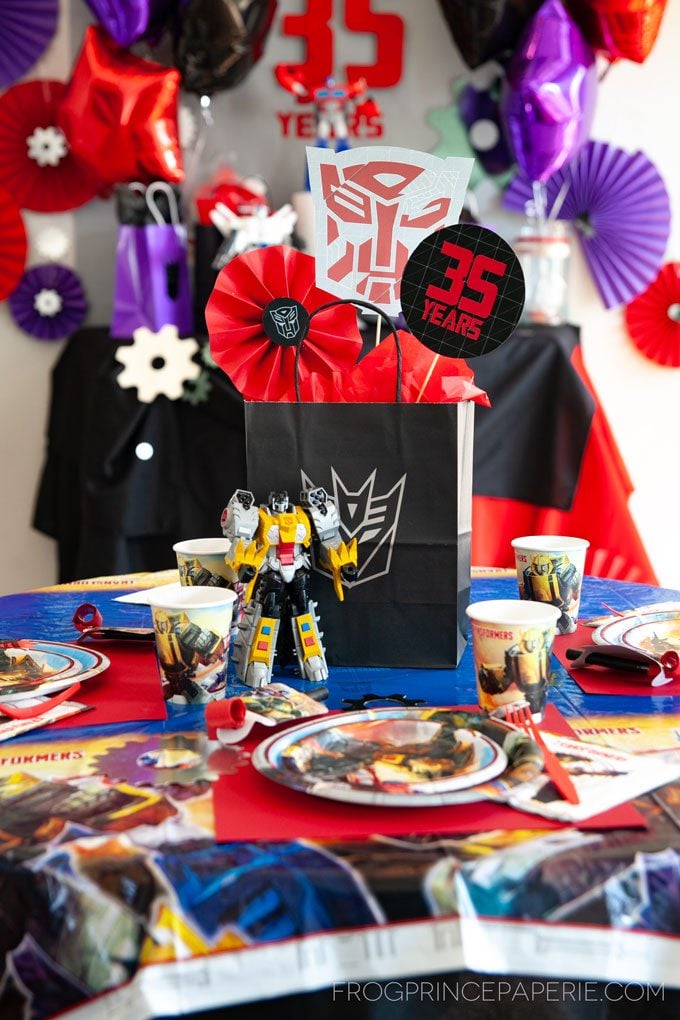 We did have a table area for eating cake and other snacks we had at the party. Hasbro sent over some paper party plates, napkins, cups and a tablecloth for the celebrations. 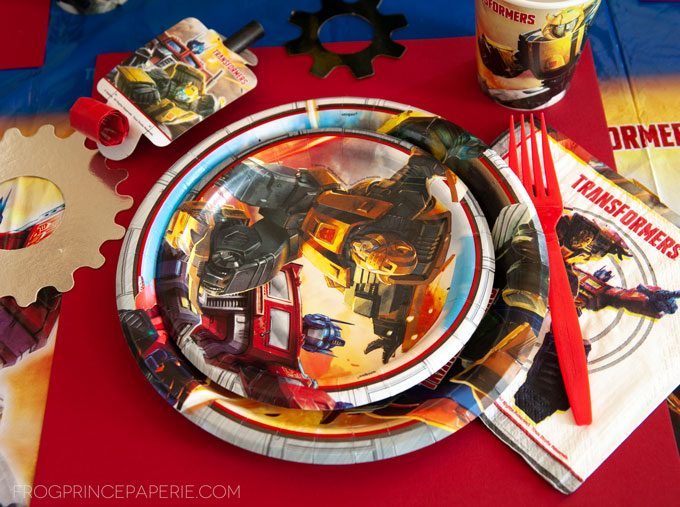 With the addition of a few sheets of colorful cardstock as placemats, we were in business. 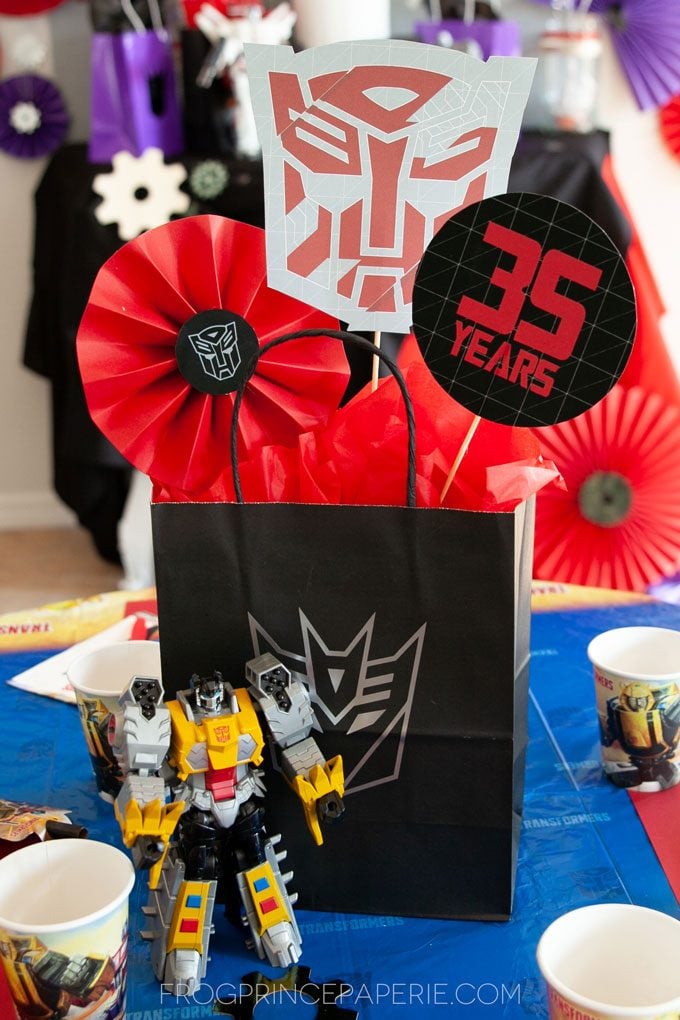 For the TRANSFORMERS centerpiece, one of the party favor bags we made was topped off with a few Transformers graphics glued to bamboo skewers. Easy! 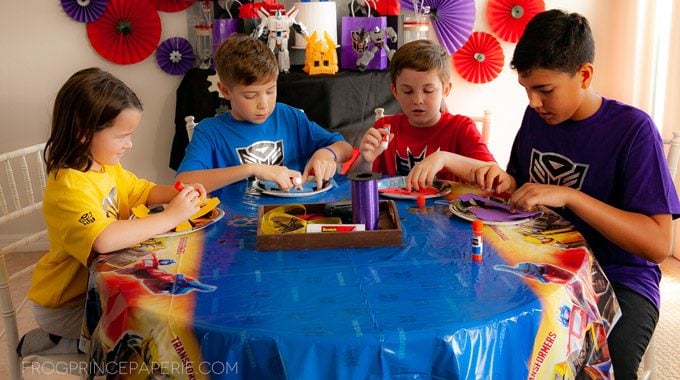 Party Activities for your TRANSFORMERS Fans

Every party has to have a few activities. We had a craft, a game, and a fun photo booth option. Here’s how we put them together: 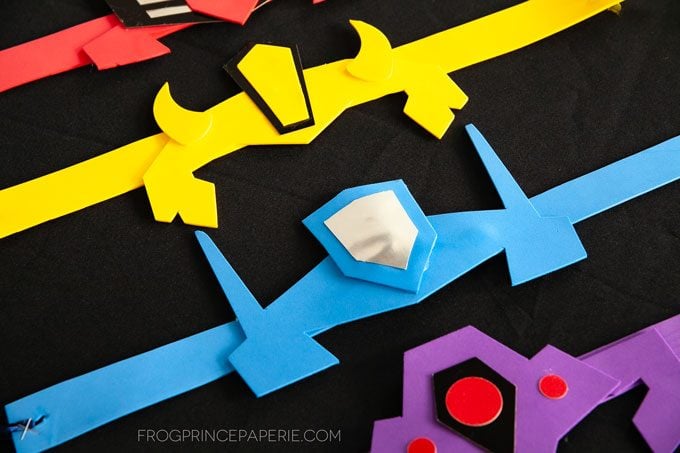 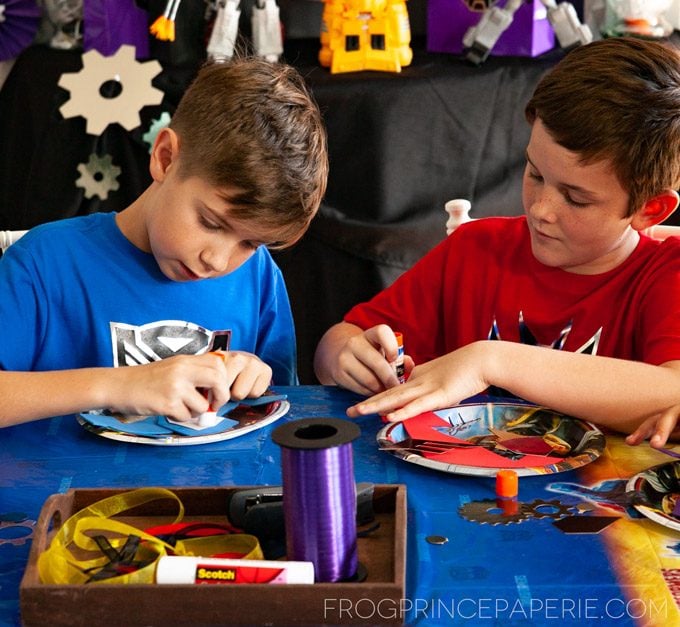 We created TRANSFORMERS headbands for the party. A trip to the craft store will net you these materials: 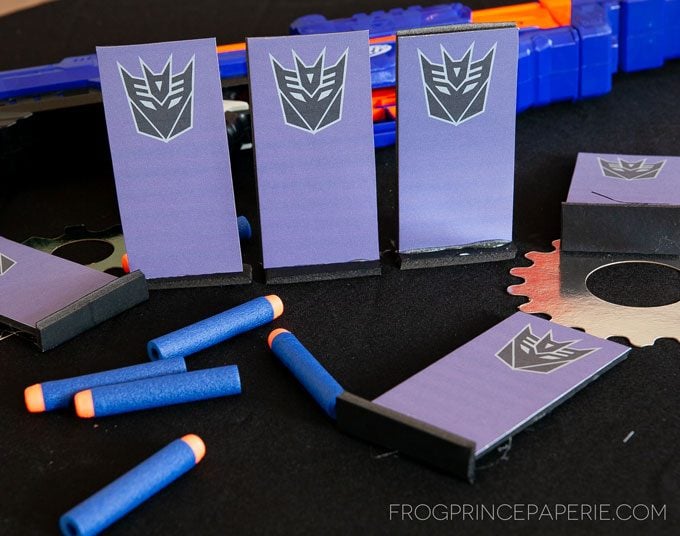 I’m always on the lookout for easy to put together games that the kids want to do for more than two minutes. Their new favorite thing is target practice with their NERF Blasters. I put a few DECEPTICON logos on foam core and stood them on end to make a little target range for their darts.

We played six dart blasts per contestant. Whoever knocked over the most targets in six blasts won.

Photo booths at parties have been around forever, and they’re still around (just like the TRANSFORMERS bots) because they are fun. I took a sheet of black foam core and cut out a rectangle in the middle to create a frame.

With a little vinyl from my cutting machine, I cut out “TRANSFORMERS” and “Happy 35th Anniversary” and applied to the frame.

Because I was already making so many for the backdrop, I added a few paper fans and silver gears. Then, I popped on some of the same graphics I used in the centerpieces to finish it up. Instant photo gold. 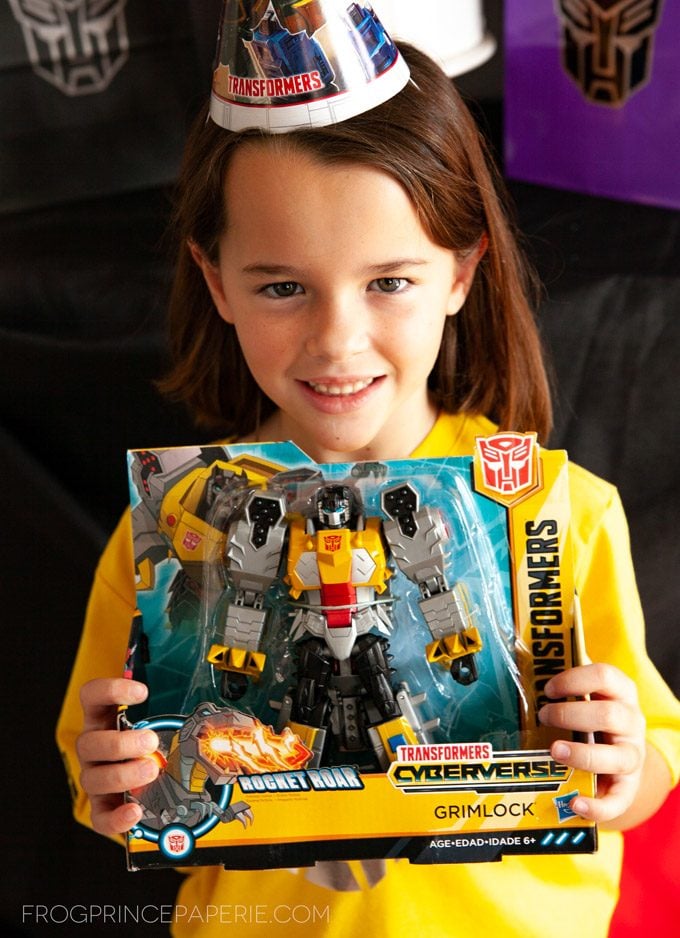 It’s so great to see this franchise span so many decades and generations. Here’s to another 35 years, TRANSFORMERS! Celebrating at the Christmas Cabin