This post is part of a social shopper marketing insight campaign with Pollinate Media Group® and Universal Pictures, but all my opinions are my own. #pmedia #BoxtrollsFamilyNite https://my-disclosur.es/OBsstV

Fridays are our official family movie night; it’s the one day a week that we don’t have to run to someone’s activity or other commitment. We all happily unplug all the electronics to sit cuddled up together on the couch to take in each other’s company and whatever movie has been newly released that week. It’s our family touchstone and the time we use to reconnect.

Most times, I’m pretty exhausted from the days prior and we just collapse into a heap and stare at the TV. But sometimes, I eek out a little extra and make family night with the kids bigger and better–like I did when The Boxtrolls movie came out. With quick trip to WalMart to get a couple of bags of PopSecret and a fun pre-movie activity, we made our family movie night into a party! 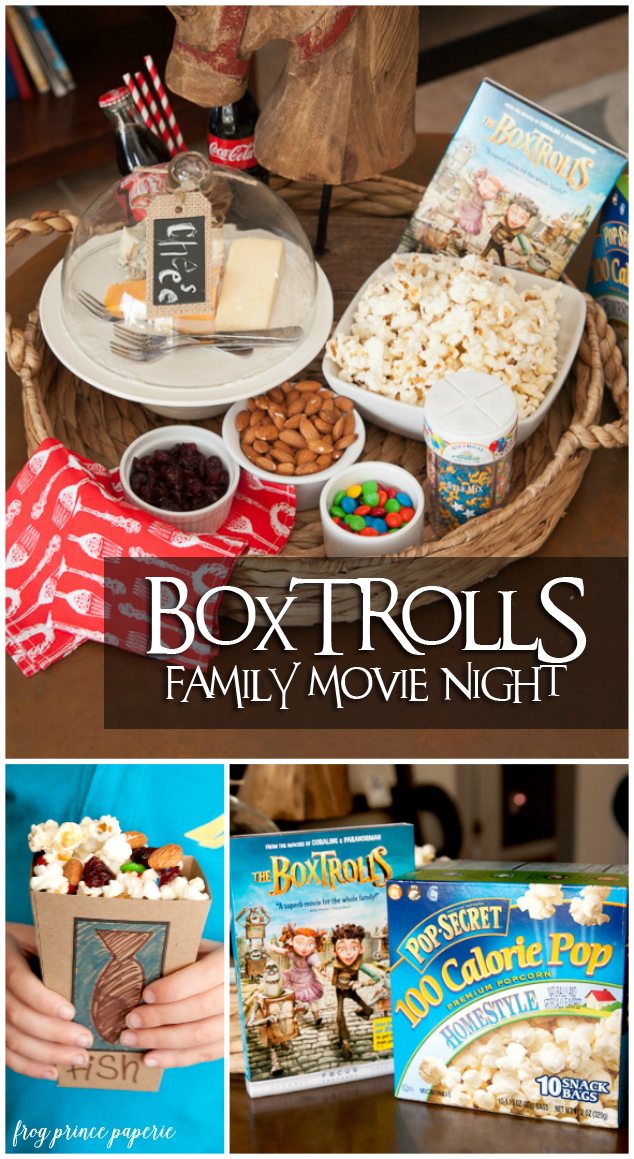 The Boxtrolls is about a group of trolls (who wear boxes as clothes) that raise a boy in their underground caverns. These trolls are clever little inventors, but lack any creativity when it comes to naming. Every one of them takes their given name from the pre-printed writing on their cardboard box, including the main characters “Fish” and “Eggs.” 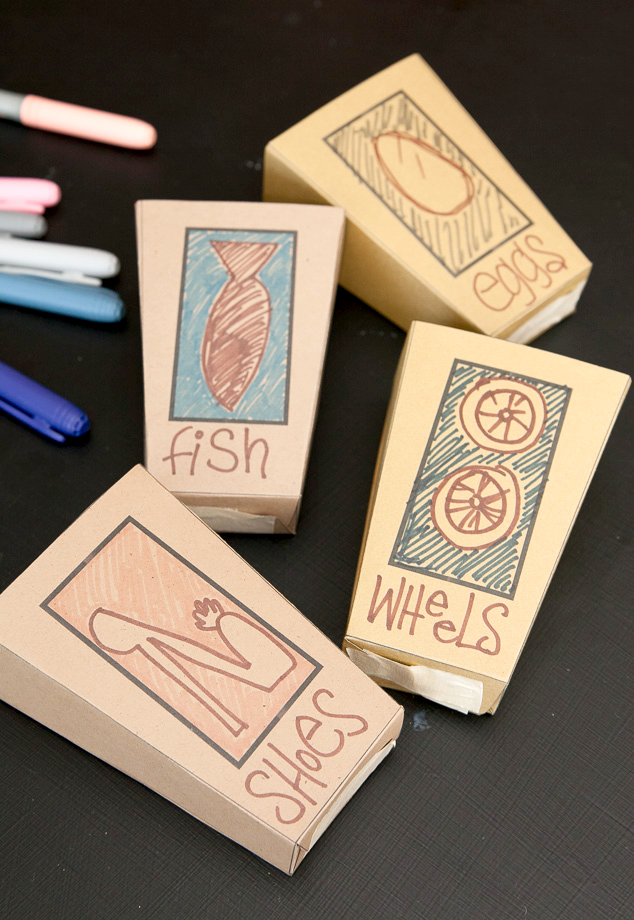 Sitting around in cardboard boxes to watch a movie didn’t sound like much fun, so I whipped up these free printable popcorn boxes to make our own little Boxtroll boxes. The kids had free reign to name themselves and draw a picture of their name on their popcorn box, to be used later during the movie. 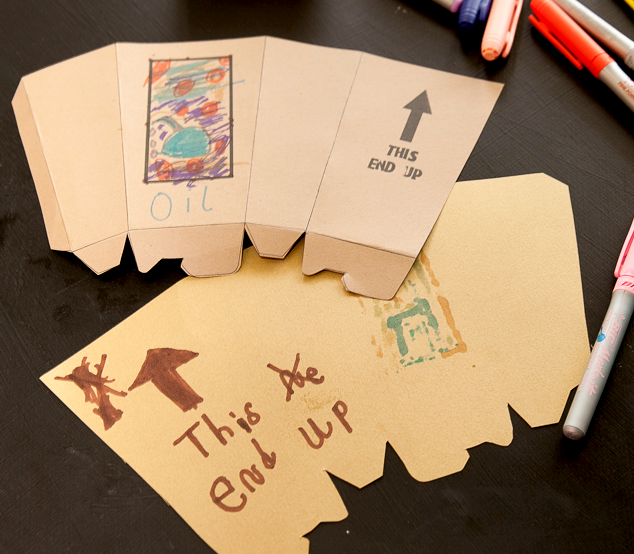 Of course, they found this so funny and so fun, they flipped over their box templates and drew their own designs on the other side just as soon as they were done. Clever children.

If you’ve never put together a popcorn box, it’s pretty easy. Print the free printable Boxtroll popcorn box template out onto brown card stock (that looks like brown craft paper, but is stiff) and cut it out. 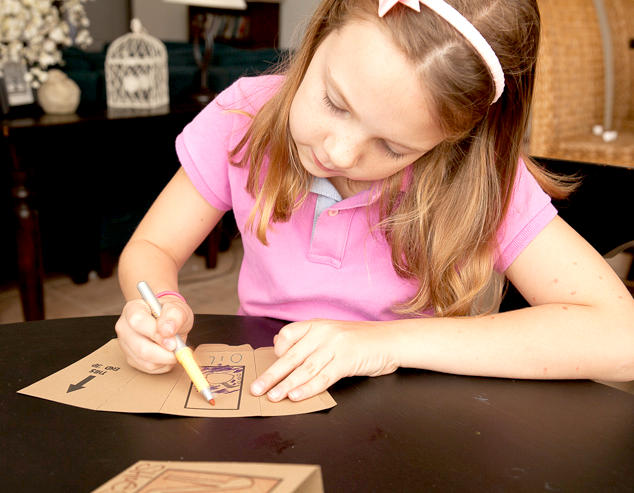 Decorate your popcorn box to the very best of your ability. Get crazy artistic. Just keep it on the paper. 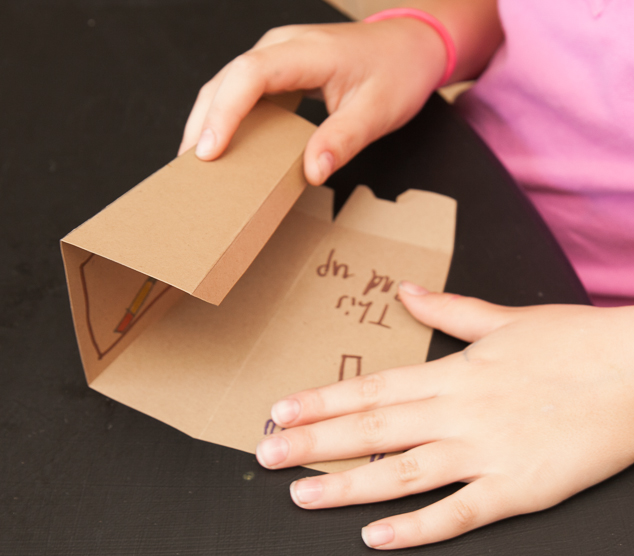 Fold the box along each of the lines in the template. You’ll eventually see four walls and a tab form with four flaps on the bottom once all the folds are made. 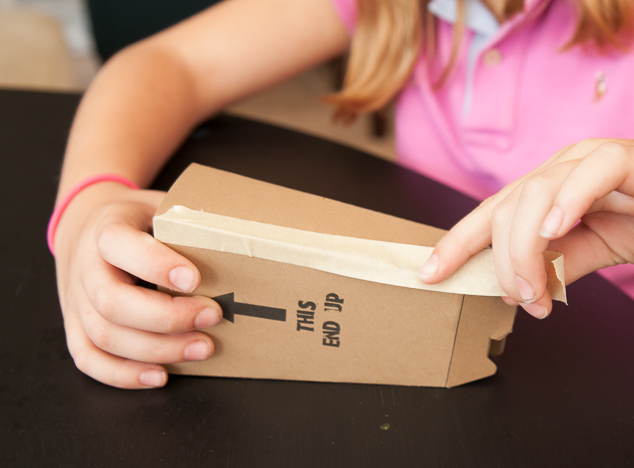 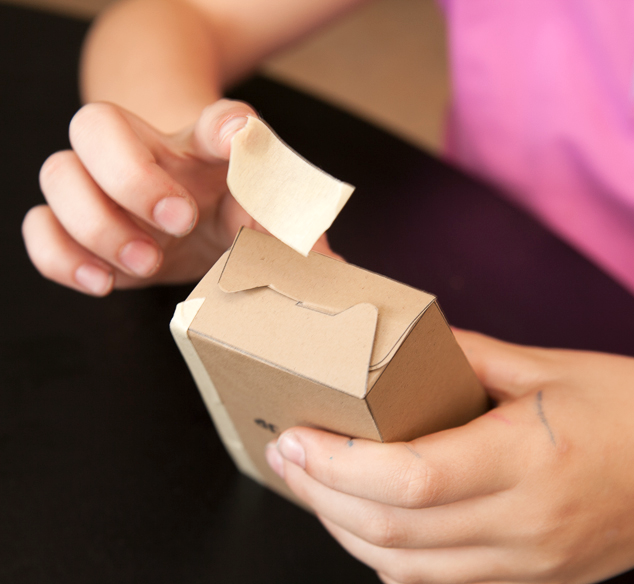 The bottom flaps should fold in and hook together. I put a piece of tape over the bottom to reinforce it a bit.

After we chose our Boxtroll names and decorated our popcorn boxes, I surprised the kids with a small popcorn bar. 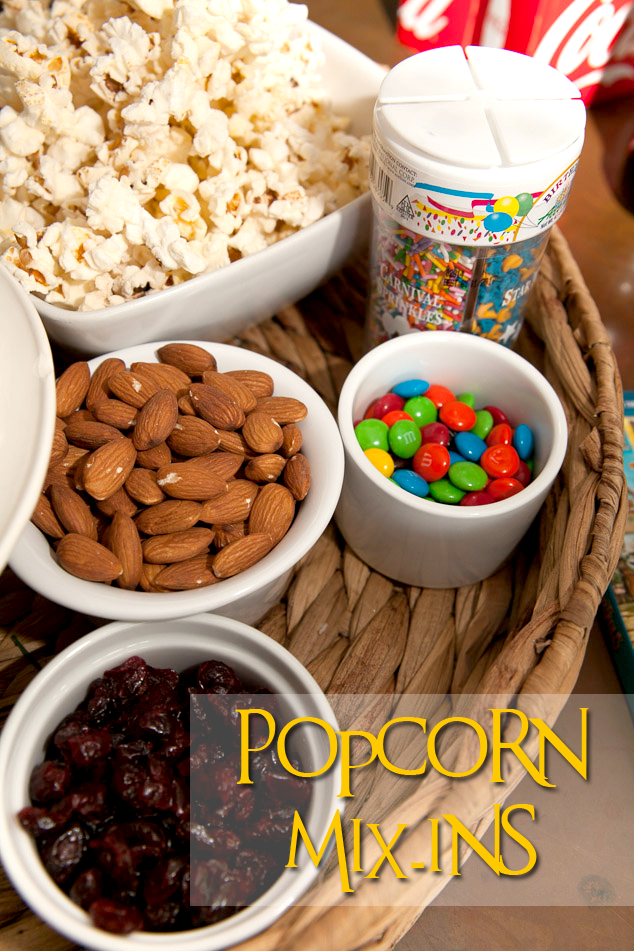 We’ve always doctored our popcorn at home with shredded cheese and seasonings, but since this was especially for the kids, I made our mix-ins more on the sweet rather than savory side. Along with a big bowl of PopSecret microwave popcorn, I put out M&Ms, dried cranberries, whole almonds and sprinkles to make the perfect movie popcorn munching experience. 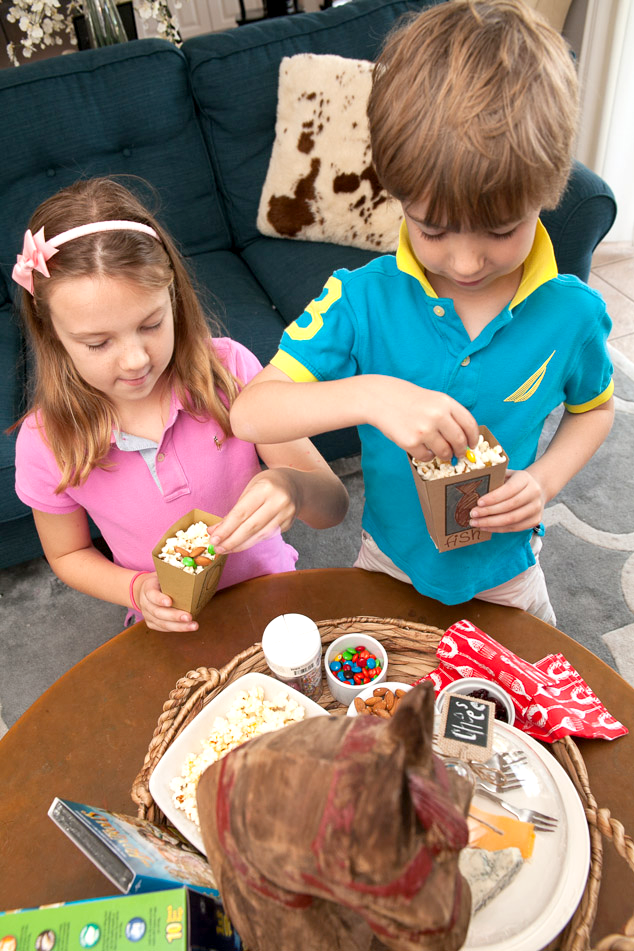 I think this was their favorite part! After filling up their boxes with popcorn, they topped them with the mix-ins I set out for a DIY treat. 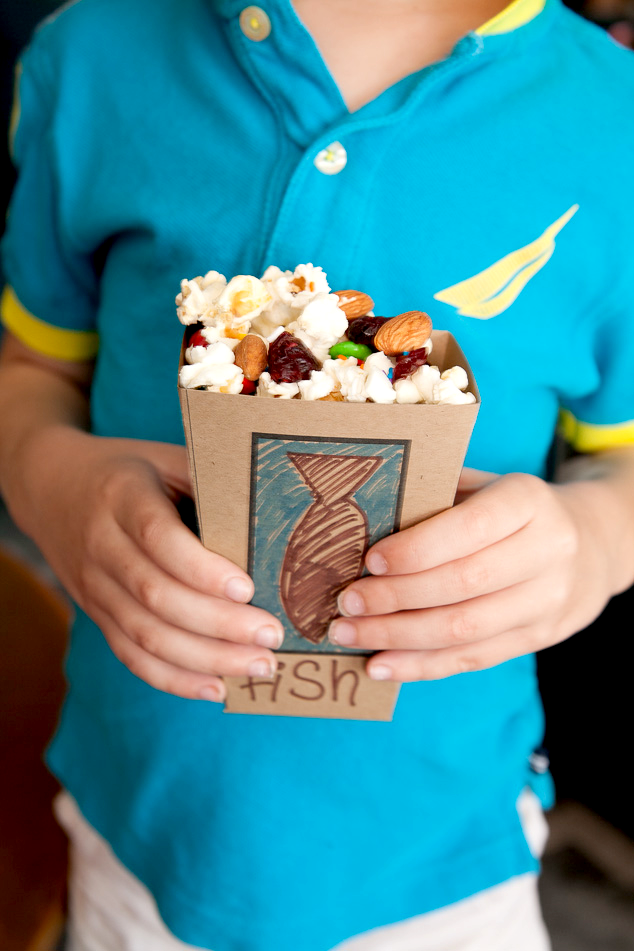 Other suggestions for Popcorn Bar mix-ins:

A fair share of the human grown-up characters in The Boxtrolls have an obsession with cheese. They wear fancy hats and go to a cheese tasting room to eat cheese they’ve spent the town’s riches on. My kids are pretty adventurous cheese eaters, so I picked up a few small blocks of cheese for them to try at the grocery store and plated them up “fancy” with a glass dome and tiny little appetizer forks to do their own little tasting. 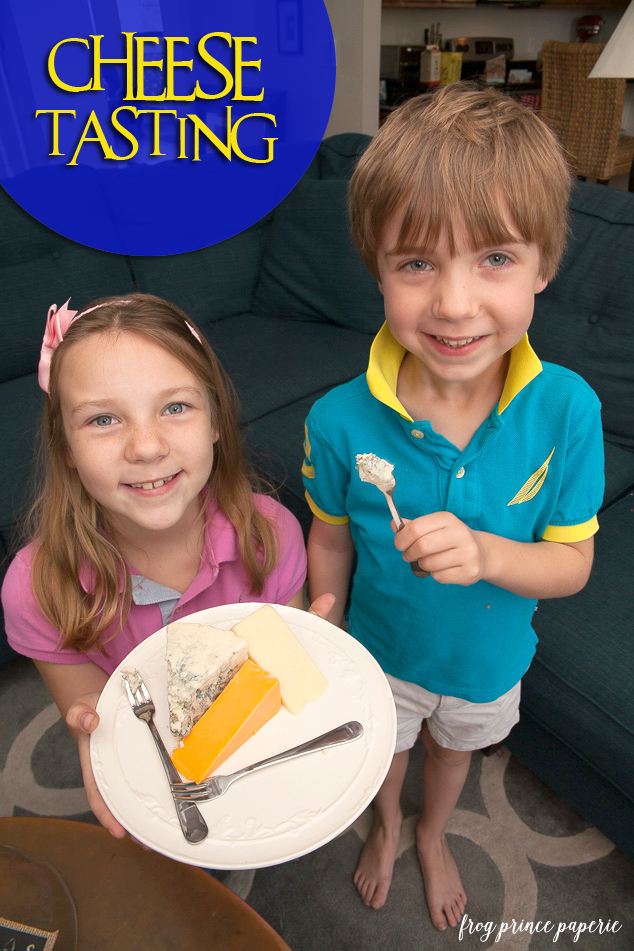 After the popcorn was gone, I uncovered the dome and everyone had a few samples. Again, they felt fancy and giggled at how they were doing something just like in the movie. 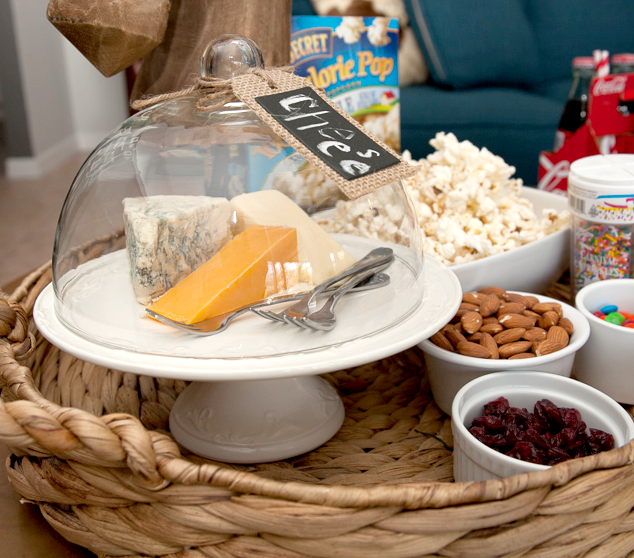 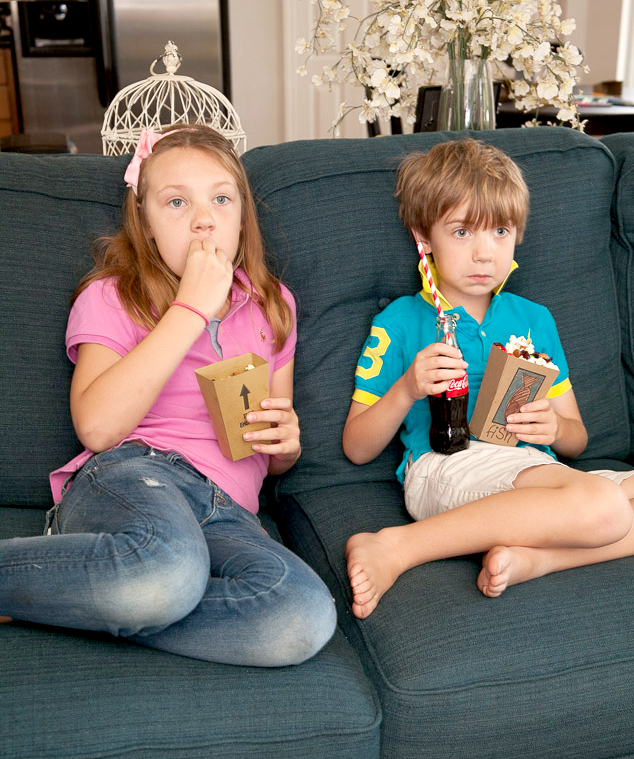 As you can see, they really enjoyed the film. 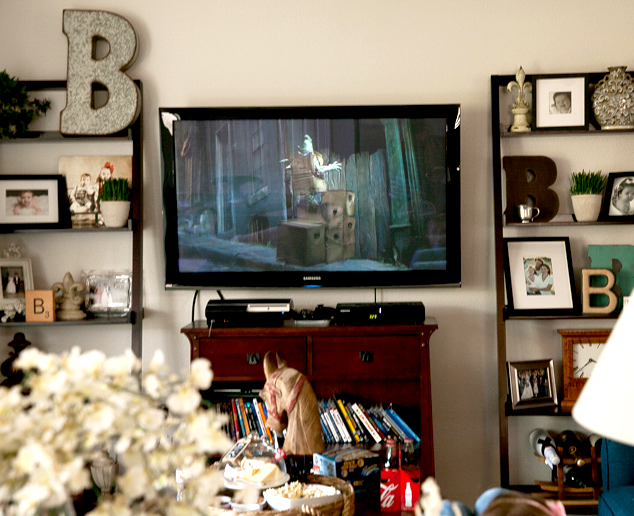 After they were fed, not a movement was made! 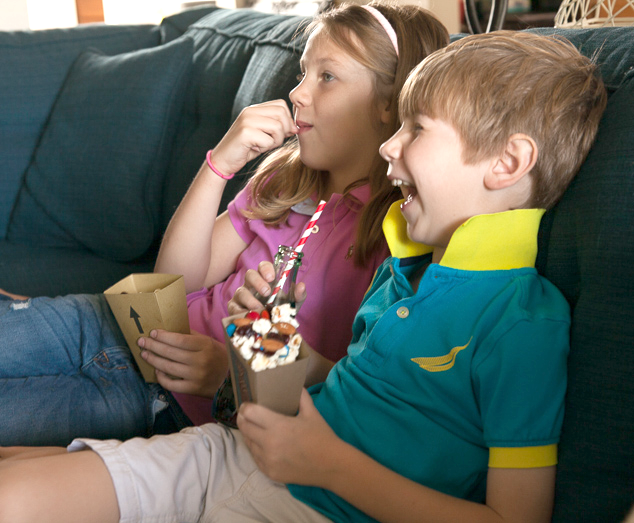 Unless they were laughing at crazy troll antics. Or getting that second helping of PopSecret Popcorn! Set up a family movie night of your own with a trip to Walmart to get your very own The Boxtrolls DVD and Top Secret 10ct Home-Style Popcorn while supplies last.

Such a cute movie. Family movie nights are the best!

How fun! We watched Boxtrolls a couple weekends ago and my kids loved it.

I love DIY popcorn boxes! What a fun activity, and a great way to bring the movie to life. I LOVE the expression on Brennan's faces in the photos of him watching the movie!

I never watch the TV, I always watch him. He makes the greatest faces!

Awesome - looks like you had a great family time!

It is really wonderful to sit on the couch together with such a good movie!