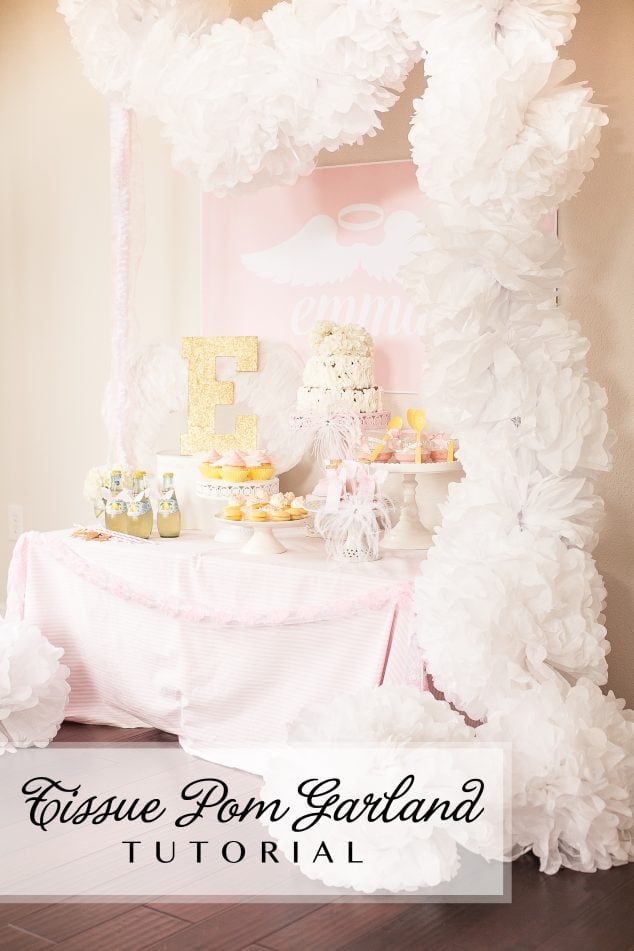 When I started thinking about fluffy mounds of whipped cream, I kept coming back to fluffy white clouds…out of which my angel first birthday party theme was born. Nothing like getting inspiration from a can of Reddi-wip! The next step was to figure out how to create that airy cloud feeling. There was a picture I saw of a very brightly colored party recently that stood out in my mind, but I wanted to do it on a more economical and quick to do scale. Making balloon garlands isn’t hard, but they take an awful lot of materials and time to complete. You can get the same sort of great look with this tissue pom garland tutorial and create a look that wows with not as much effort as you think! 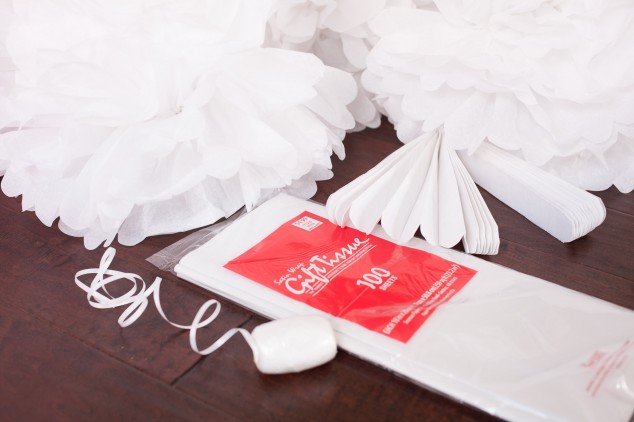 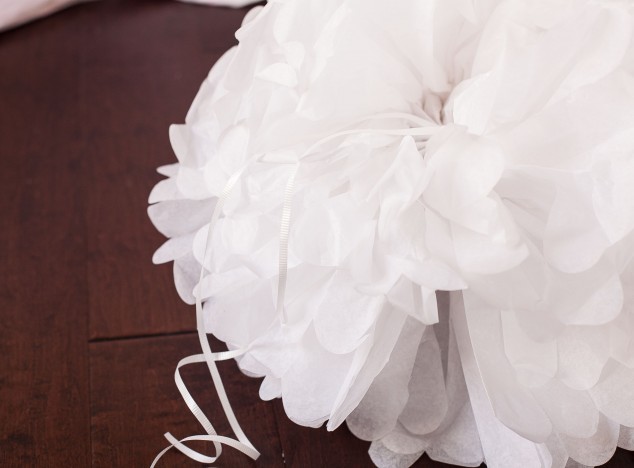 Step one: Make your Poms.

There are a million and one tutorials on how to make tissue poms. I actually have one on my site here, too. Pick any one of those and start making poms! For this garland, I cheated a bit as I found some already folded and cut ones I just had to fluff up at the craft store, and then complimented those with some slightly smaller ones I made to give the garland less uniformity. 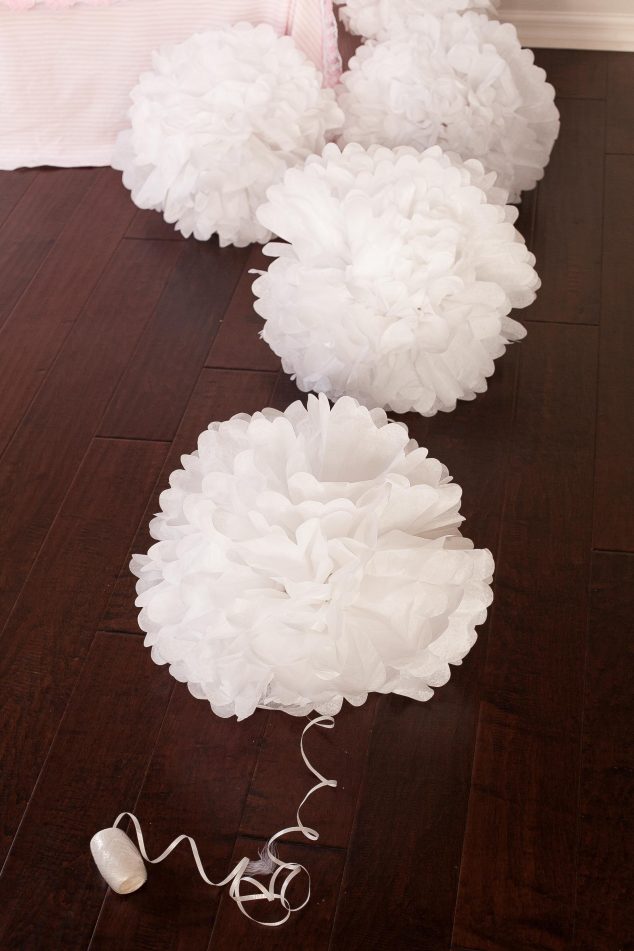 If you didn’t leave extra string around the center of your poms while you were making them, just take a good size length of curling ribbon (12 inches or so is perfect) and tie tightly around the middle of each of your poms.

Cut a piece of string or curling ribbon the length you would like your garland to be plus a few extra feet for tying the tissue pom garland up for display. 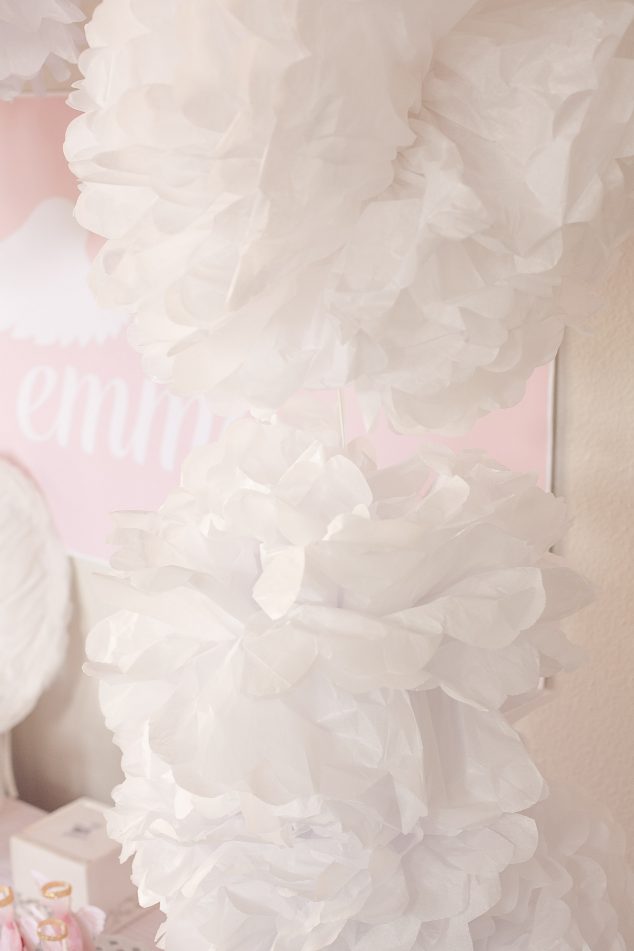 Starting at one end of the string, use the pom strings to tie the poms to the curling ribbon. You’re not going to want any space at all between each pom to get the look in the picture; you’ll want to press them together fairly tightly, but not so much that they’re smashed and lose their shape. Keep adding poms to the ribbon until your garland is the desired length.

Let me say first, I am not afraid to put holes in my wall. I have a big can of spackle and touch up paint in my garage at all times. If that’s not your thing, you may want to find an alternate way to hang up your garland when you have it complete! 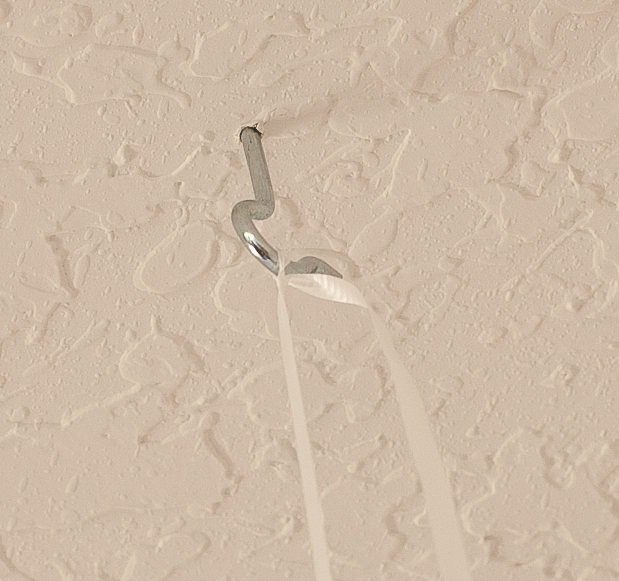 Believe it or not, all that tissue paper gets a bit heavy when it’s all together. I put some medium sized hooks in my ceiling to accommodate the weight of a 6 foot span of garland and an 8 foot drop on the right.

When I physically hung it up, I tied extra strings to my garland and then looped the strings to the hooks so I could get a nice drape that didn’t smash up against the ceiling.

As you’re making your garland, be sure to think ahead about the length! I think what makes the visual impact so fantastic on this is the pooling on the floor.

If you make one of your own, I’d love to see your pictures, so send them in or post your link! The Birthday Crown: The DIY and How-To Tutorial

Thanks for the tutorial! One question where or how did you make the banner with name and Angel wings??

ooohhhhh! I love this! I will have to try this! Thank you for sharing on Show Me Saturday!

Very beautiful. Thanks for sharing. Linda Bauwin - CARD-iologist Helping you create cards from the heart.

These are beautiful! The whole tablescape is beautiful!! I'm going to use this for a party in a couple of weeks. Thanks for sharing on Something To Talk About link party!