I remember well last summer when the new Pokemon Go game came out. There was much pestering from the kids to download the game and go tromping through the parks catching little electronic critters with strange names. As a side note, it was pretty awesome seeing everyone outside in the fresh air interacting and doing a ton of walking.

This year’s trend is even more exciting. There’s a love spreading group called The Kindness Rocks Project, and if you haven’t looked it up, you totally should. 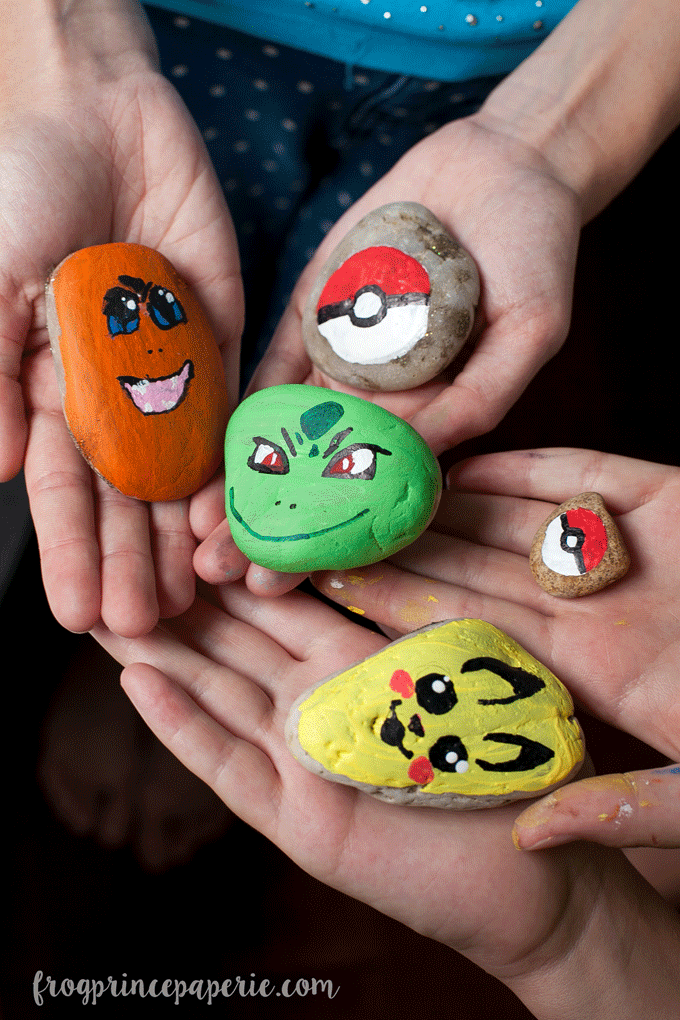 In short, people are painting some really beautiful pieces of art on the very small canvas of a rock then hiding them in their local areas. People of all ages hunt (or just stumble on) these rocks and it’s meant to spread a little happiness. I’ve seen some really gorgeous pieces and lots that you could tell the kids had had themselves a really great afternoon with their paints! 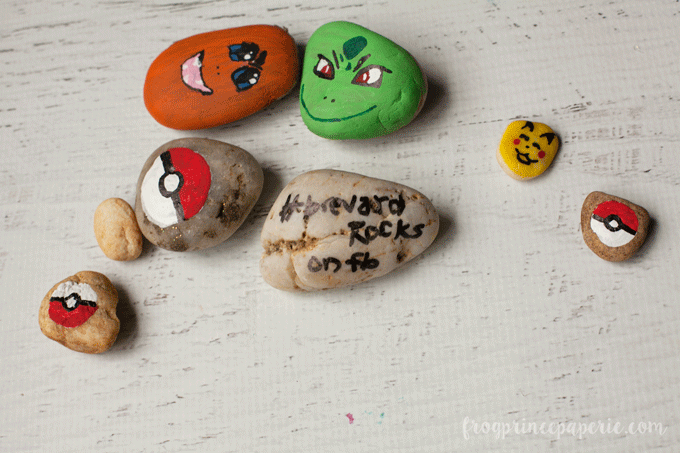 Part of the fun is re-hiding the rocks so others can enjoy them as well. You don’t keep them, you put them back out to the world for someone else to find and feel a little joy. All are marked with their locale’s hashtag on the back so you can see where they came from. These particular Pokemon painted rocks got spread through the state of Michigan while my kids were on vacation. 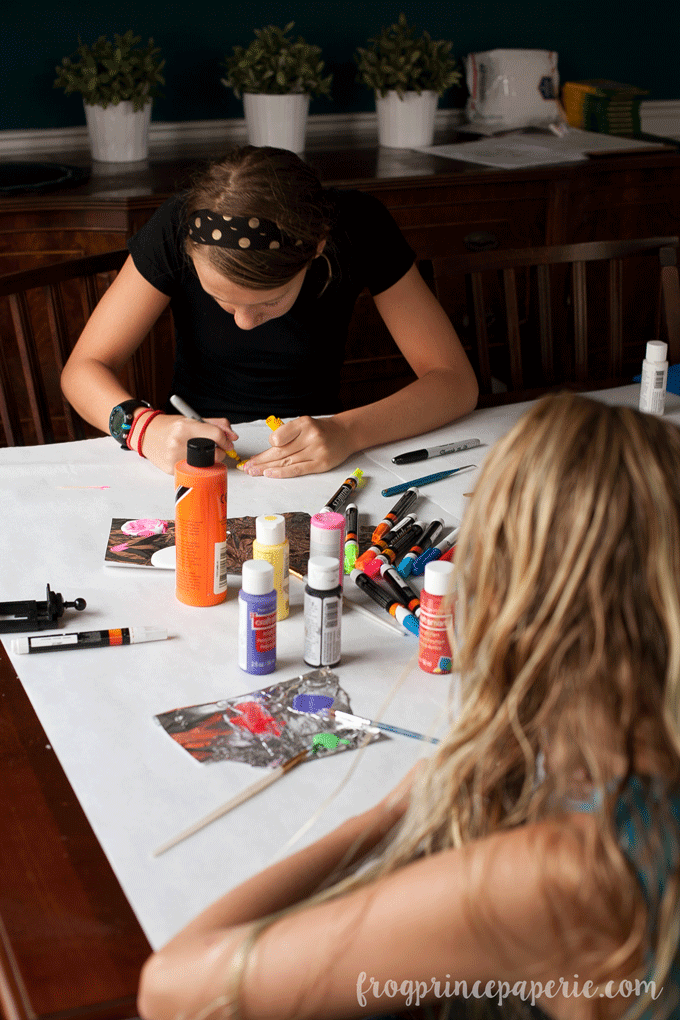 Much like with Pokemon Go, people are getting out to their public spaces in large numbers looking for these rocks and enjoying the outside. Kids are looking for these little masterpieces without being glued to a screen. Add to that, there is family time spent at home creating their own little painted rock treasures — it’s an incredible activity to participate in this summer and a lesson in giving and kindness.

While much of the world’s interest in Pokemon has waned, I can report that the Pikachu love is still strong in my home. And judging by the visits to my Pokemon Birthday Party and Pokemon Party Games, I am really really not the only one still dealing with a mess of Pokemon cards. 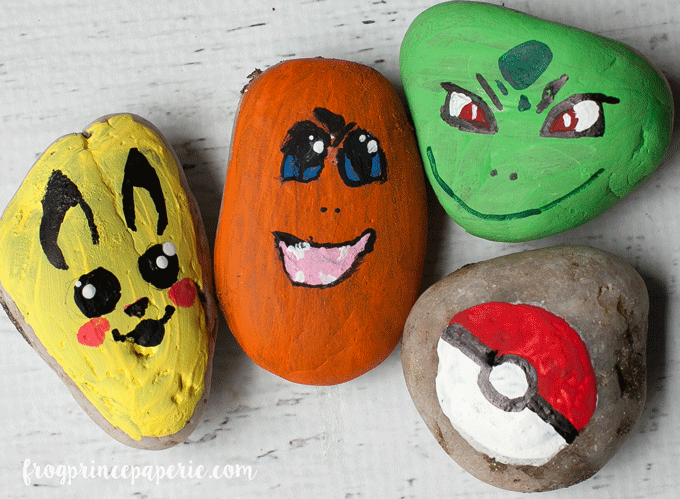 If you want to paint a few Pokemon-themed rocks, I’ve got some advice on how to to do that in a way the kids can pull off. In fact, the kids painted everything you see in these photos! Here’s what you’ll need…

You’ll need to put a good solid white circle on this one first!

Take your Sharpie and draw on a circle in the middle of the rock.

Now take care to paint half the rock red around your circle as shown above. You can also use a red sharpie to color in! 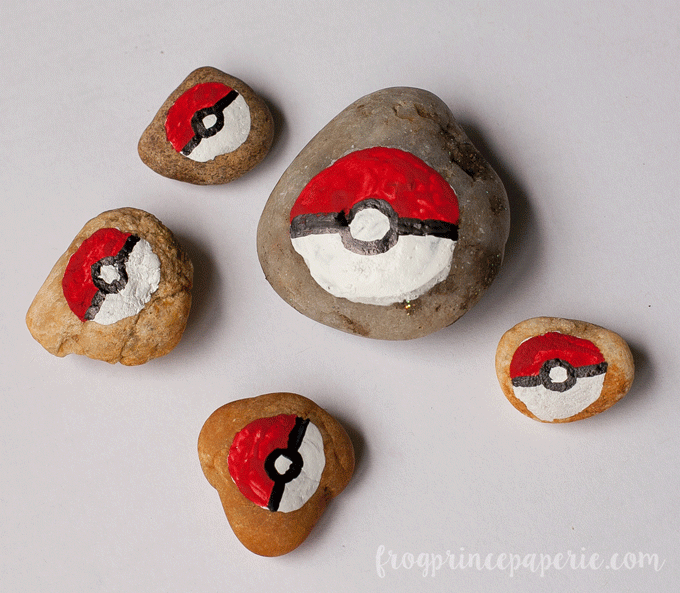 After the paint or sharpie dried, draw in a black band across the middle (but not through the white circle!) and outline the inner white circle.

You’ll want to seal up the rocks so they weather well after being placed outside. Don’t want all that hard work to wash off too quickly!

Paint solid yellow and let dry completely before you go on. 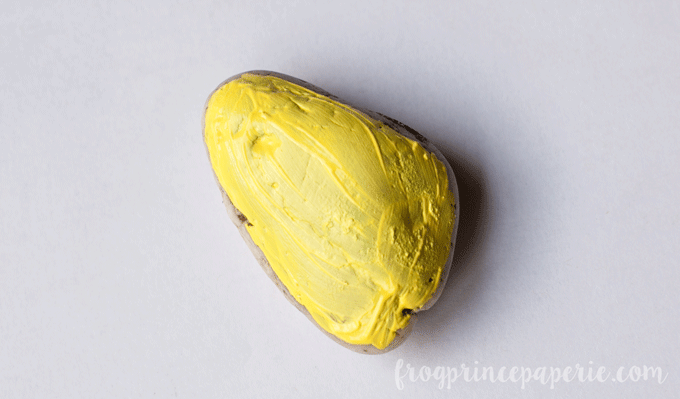 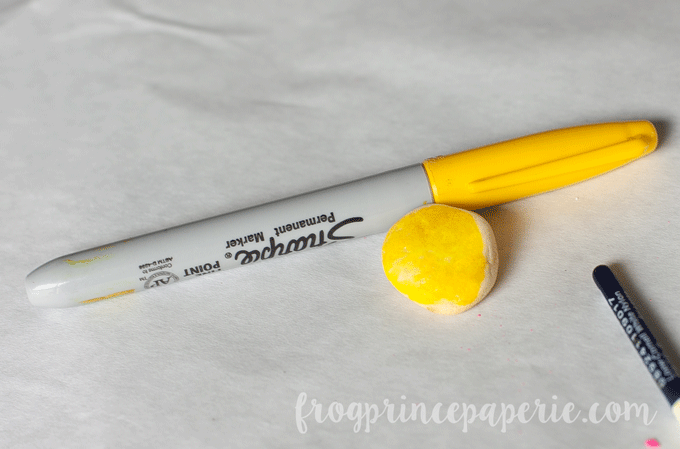 Depending on the color of your rock, you may need to put a white undercoat on first. If you have a light colored rock, you can absolutely use a Sharpie marker to “paint” your rock yellow. This doesn’t work so well on darker colored rocks. 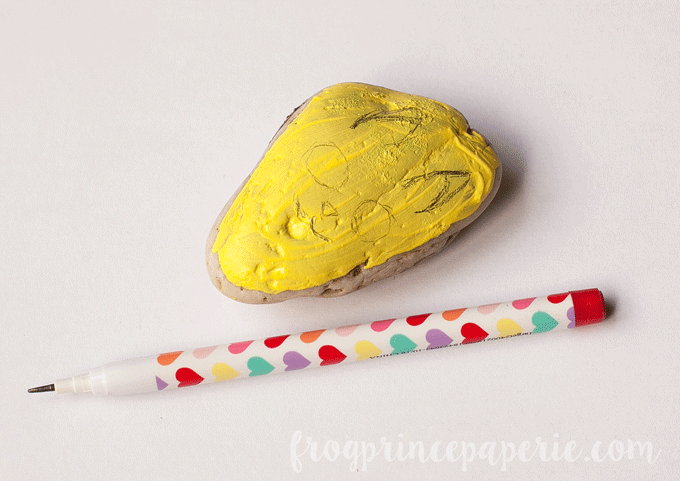 Next, you’ll pencil on Pikachu’s face. We’re doing an impression of Pikachu, so the artwork is a lot more forgiving. Draw on pointy ears, two large dot eyes, a tiny triangle nose and a little mouth. 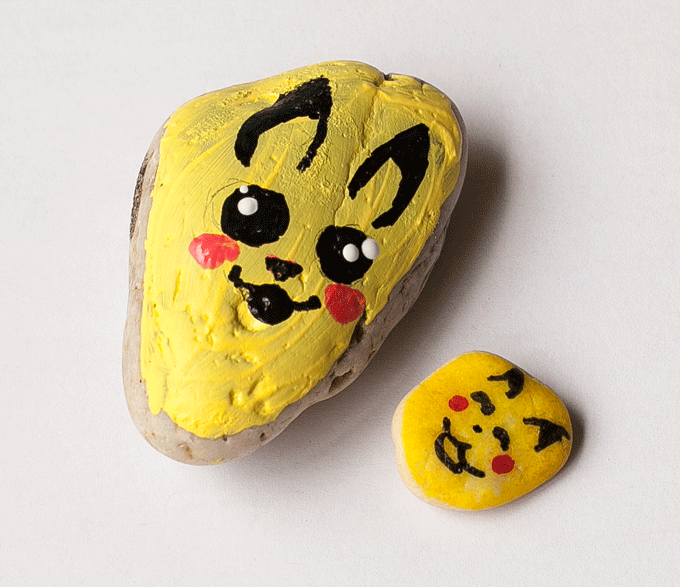 Take a black Sharpie marker and fill in the ears, eyes, nose and mouth. Paint or sharpie on little reddish cheeks for Pikachu. A couple of dots of white on the eyes finishes off Pikichu with a cute little detail. Or you can make half moons like our other little friend did and skip the detailed eye part. We’re all for free wheeling creativity. 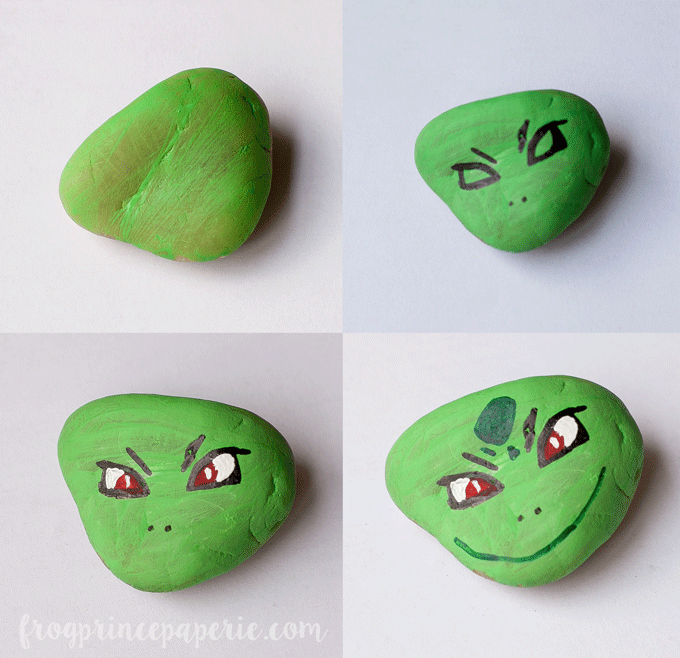 My little friend made the DIY for this one all by herself! First, she painted a rock green. After it was dry, she used a black Sharpie marker for the eye outlines and nose. A little red, then white paint filled in the eyes. To finish it off, she used a green Sharpie to draw in the darker spots and wide bulbasaur smile. 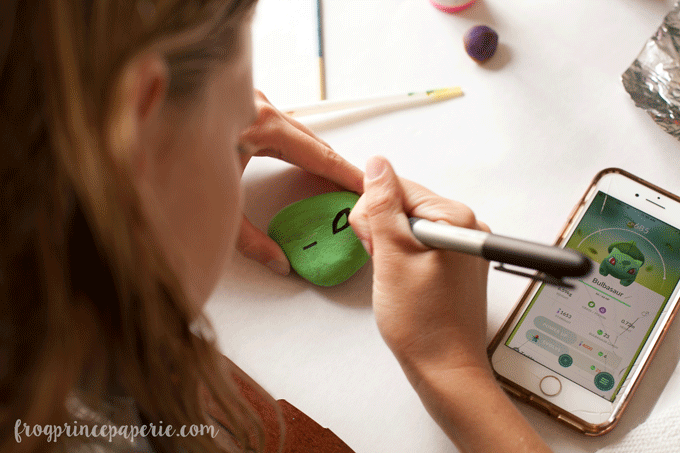 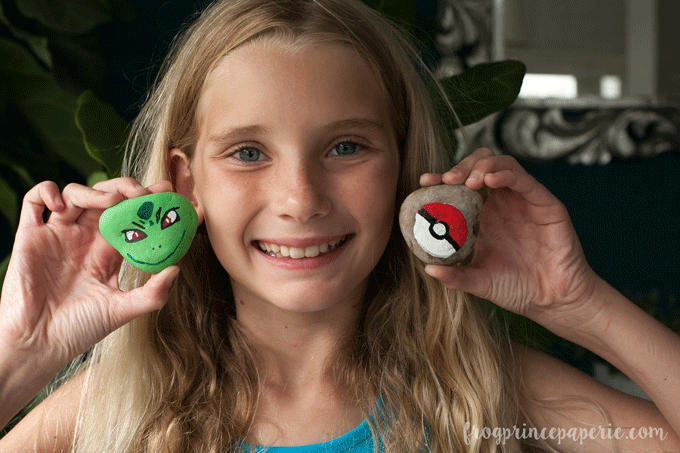 If you keep the design of the rocks simple, you can use this same idea to make any Pokemon you want. There were a few Embryons, Charizards and Jigglybuffs on our table by the time the kids were done painting. 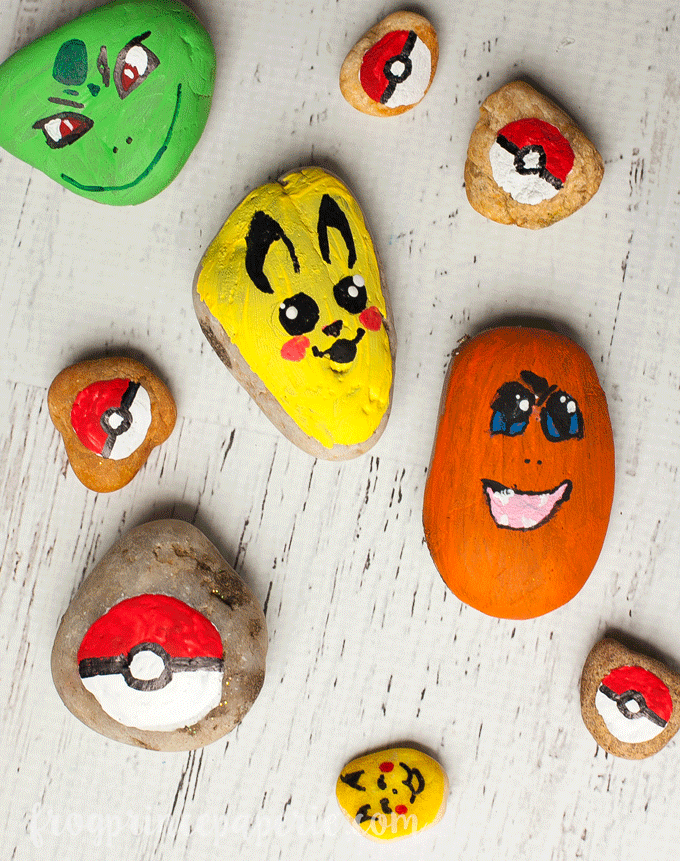 Rock painting and hiding is a wonderful way to spend some family time this summer!

This site uses Akismet to reduce spam. Learn how your comment data is processed.