I’m going to help you with a ton of DIY Pokemon Birthday Party ideas and help you be the coolest mom on the block!

Every inch of this post is filled with awesome DIY Pokemon Birthday Party ideas. In the next few minutes, I’m going to show you:

If you’re interested in all things Pokemon here on the site be sure to check out our 100 Pokemon party ideas post here, or browse the Pokemon Category.

Decorating for a Pokemon (or Pokemon Go) party is not a one-size-fit all thing. Costumes make a great party decoration, as do paper,  party printables and dollar store balloons. If you’re not into going overboard on your kids’ party, pick a few details that speak to you to make your Pokemon Party special and run with them! 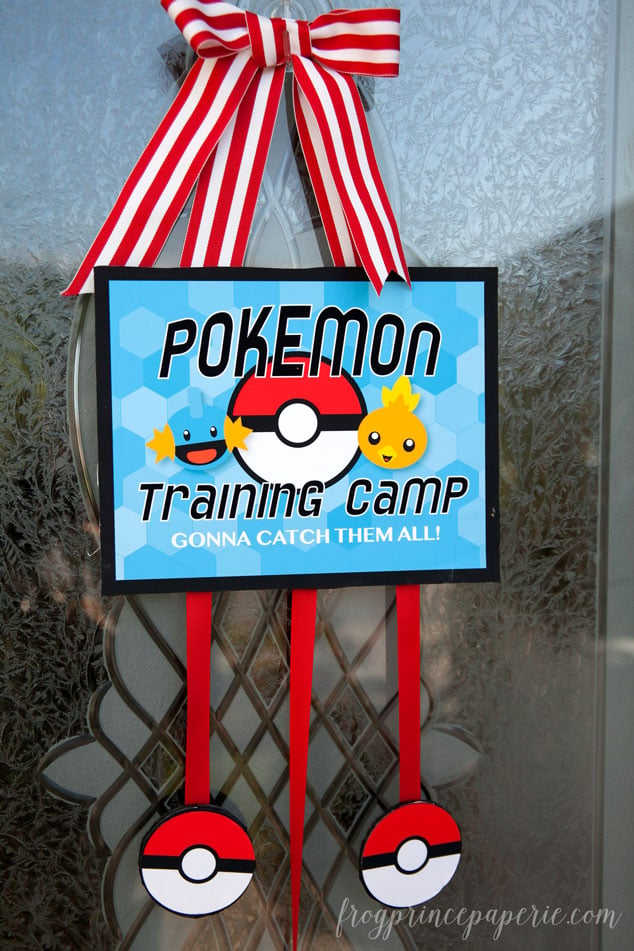 It looks like I did a ton for this party. But I didn’t. I picked a few things that were big visual stand outs, but inexpensive, to fill up my space. This is really easy for you to do at home at your Pokemon party.

Starting at the front door–I love greeting guest with a sign. This is a Pokemon printable I designed (click the link to purchase if you like it!) I hung with a little ribbon, and dangled some paper Pokeballs from the sign. 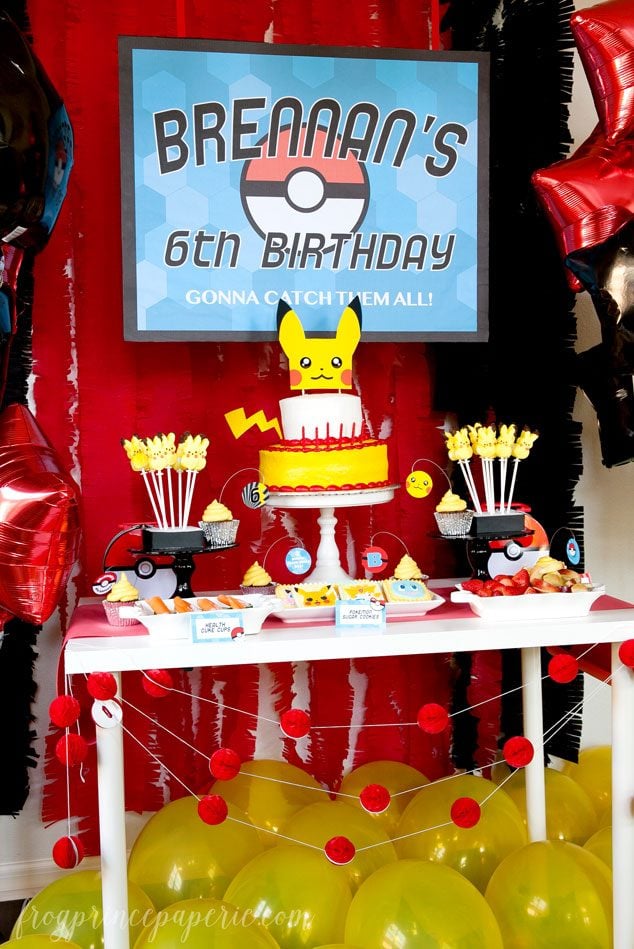 I’ll get into the food we had at the party in a moment, but I wanted to show and tell about my DIY Pokemon party backdrop first! It’s made of three packages of crepe paper. I used the basic idea in this tutorial to make the DIY fringed streamers. It was a pretty quick project, and made a great back drop for not a lot of work.

Best bang for your buck at a party? Balloons. I visited my local dollar store and bought $25 worth of mylar balloons to decorate. Small effort, small investment, big party fun.  And you can hand them to kids on the way out the door as an extra party favor. Balloons quickly make a party feel more festive, even a Pokemon party.

Another way I use balloons is as floor cover. I’ve done this for practically every party my kids have ever had. They are colorful on the floor, look great in pictures, and the kids have a great time playing with them. Just count on them running around like hooligans with them and popping them all before the party is over! 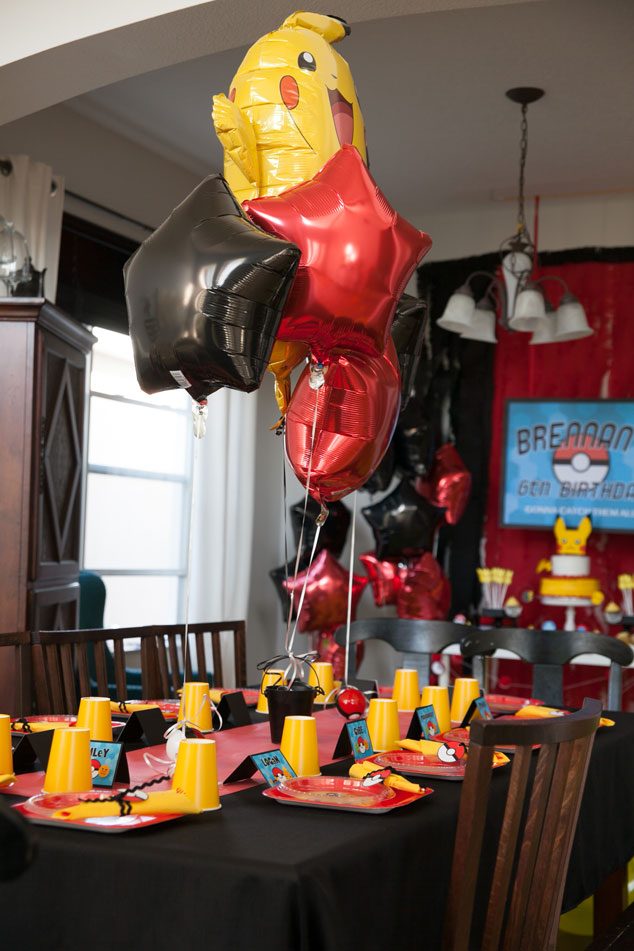 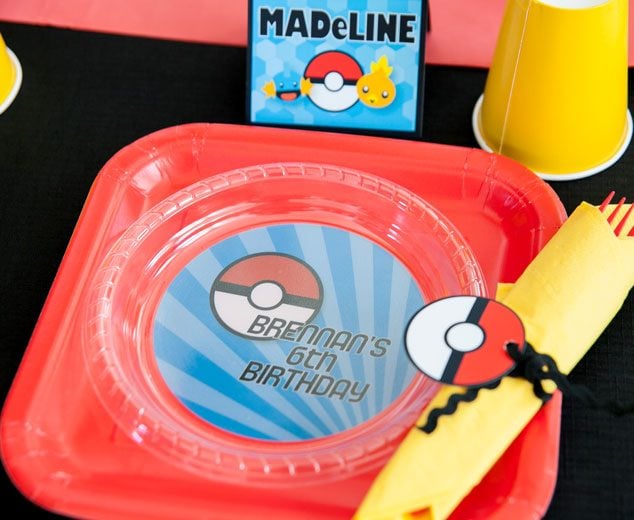 The tables the kids sat down on to eat were also an easy thing to decorate. Again, a group of balloons (I did spring for a Pikachu mylar balloon) and some neat table settings were designed.  Those Pokemon party printables I keep talking about were printed, punched, and used on the napkin rings and as place card settings.

The company that made these really awesome plates for me is out of business, but you can go pick up a pack of Pokemon plates and get a similar look! Still awesome and totally easy.

Also, if you have the time, kids LOVE seeing their name on stuff. It takes a hot minute to cut and fold a few Pokemon place cards and will make all your little Pokemon trainers feel really special! 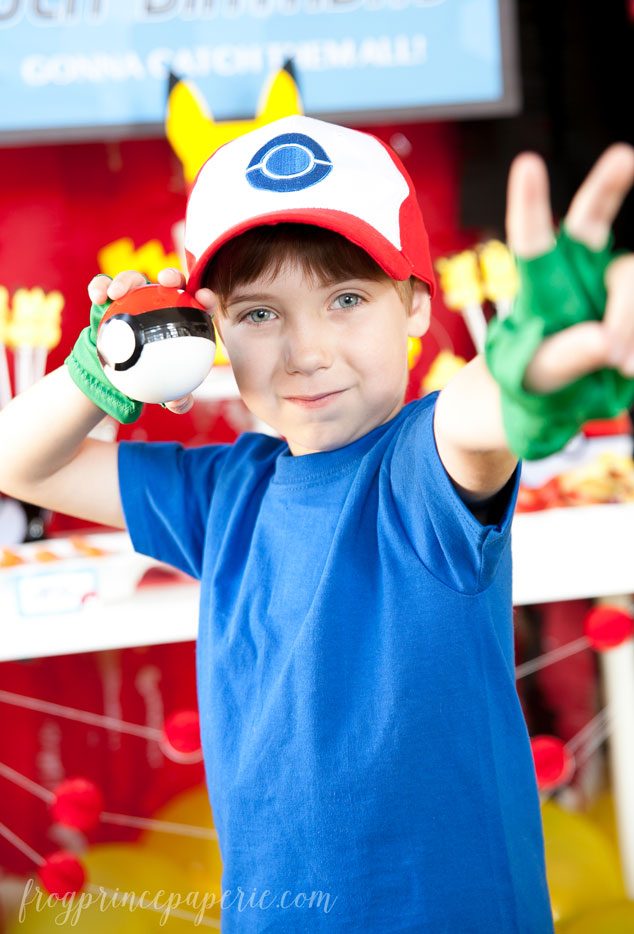 Costumes make a great addition to any Pokemon birthday party, and are easy and inexpensive to create!

A Pokemon birthday party is the perfect excuse to put on a costume.

I nixed a bounce house for this party. In concession the birthday boy was allowed to dress up, which worked out great because costumes at a birthday work as their own living decor running around the party. My son HAD to be Ash. If you’re only dropping into Pokemon lore as a result of Pokemon GO, you might not be familiar with Ash as he’s from the Pokemon cartoons. (Go check your Netflix for some reference.) These are affiliate links, by the way. They don’t cost you anything, but help me pay server fees!

Or, since Pokemon is mega popular again, you can also just buy a whole Ash Pokemon Trainer costume here without doing the piecemeal work.

The plush Pikachu we already had, it was a Christmas gift, but if you’re hunting for one, you can buy Pikachu here like I did. 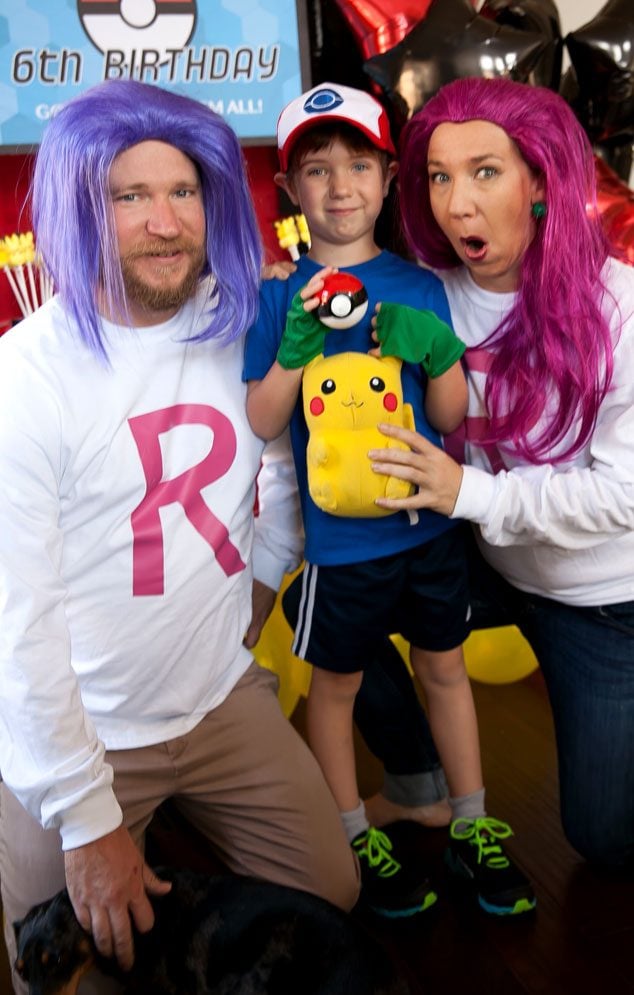 The adults getting into character as Team Rocket – embarrassment can be a gift!

At this party, mom did take birthday requests. Like making mom and Pokemon-loving Uncle Sean dress up like Team Rocket. That’s Jesse and James you see in this picture, also from the cartoon. So easy to put together, and a super big hit with all the kids! You can find the wigs here and here. I ironed vinyl onto white t-shirts for the “R”s and it it was enough for the costume. Again, we were decorations that walked around and made the party feel FUN!

If your kid would rather be a Pokemon character, I have a few options for DIY Pokemon costumes here. You’ll need a Cricut Machine, but they’re all easy to make!

Other options for Pokemon Party ideas for decor that I love if you don’t DIY:

It’s time to feed all our Pokemon trainers! 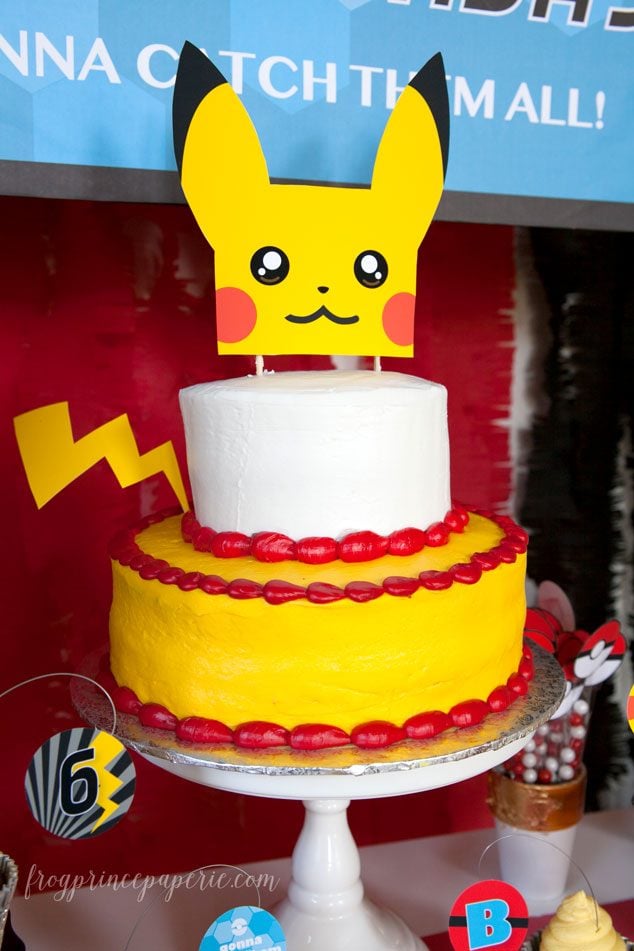 There was a “dessert” table at this party. These can get super expensive if you let them, or you can create one in a reasonable way without an overload of items. In other words, keep it simple and it can be done affordably.

First thing I ALWAYS plan is the cake portion of the table. Or cupcakes, depending on the event. For this Pokemon Party, I was feeling lazy and time crunched, so I ordered a 2 tiered cake from the grocery store and put my paper printable Pikachu cake topper on it. Seriously easy. And not as expensive as you think. And it was only a 10 minute time commitment. Click here to buy the Pikachu cake top! 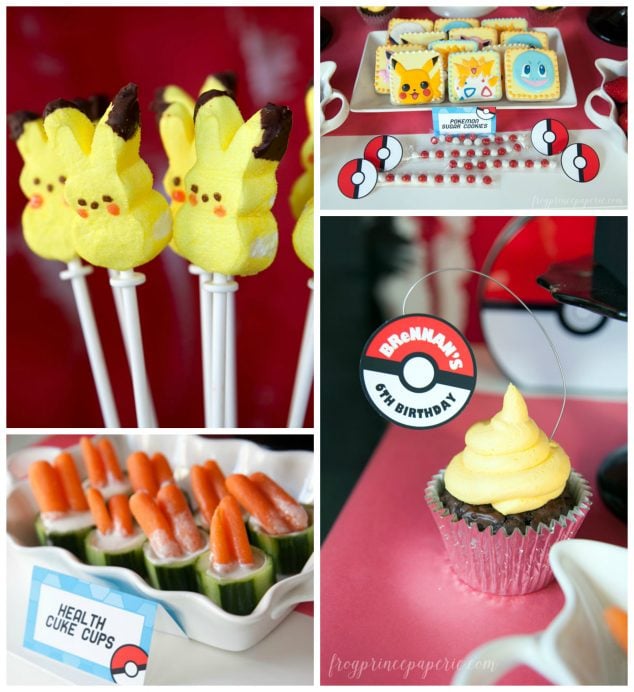 Because this was intended to be a low-key party (low-key in my world, anyway!) I kept the food to a minimum. Our Pokemon Party food menu included:

It was plenty for everyone, and there wasn’t a mountain of leftover food at the end! Which is a problem a big dessert table can lead to. 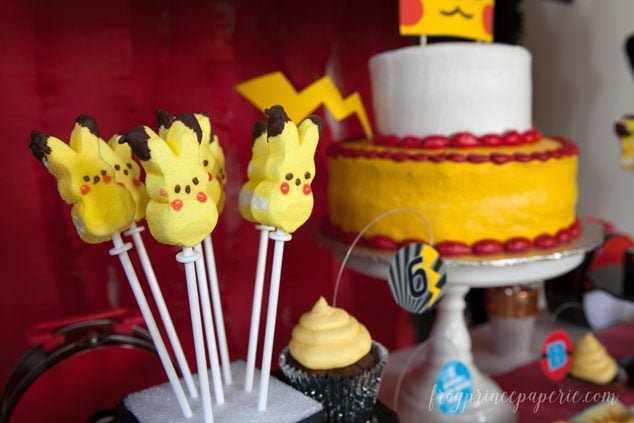 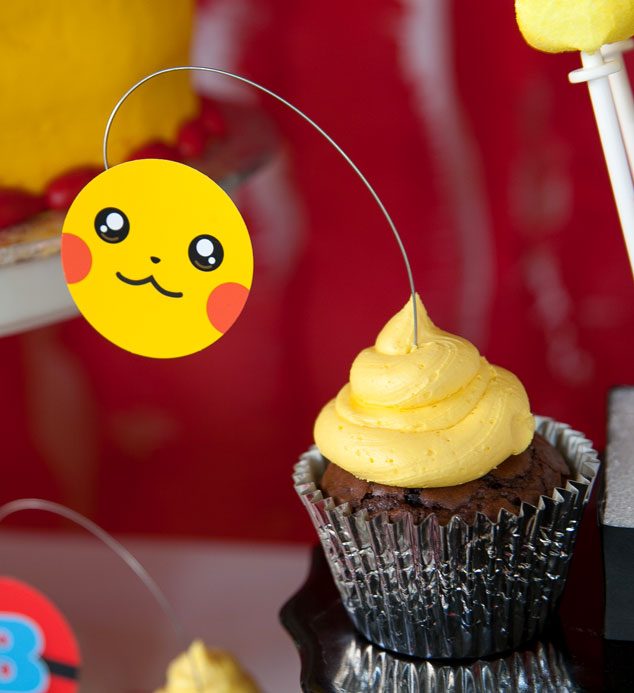 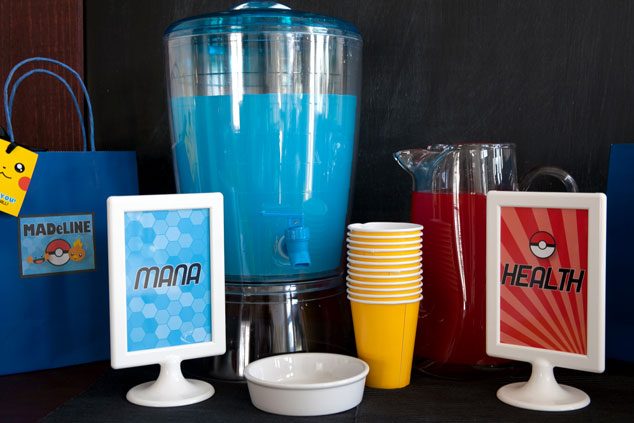 “Health” and “Mana” were (watered-down) Kool-Aid…although if I had to do it again, I would find a different drink to serve. To make these Pokemon GO friendly, I would rename the drinks something like “Super Potion” and “Hyper Potion.” Which I’ve done to the party printable set if you’re looking at it for your party. 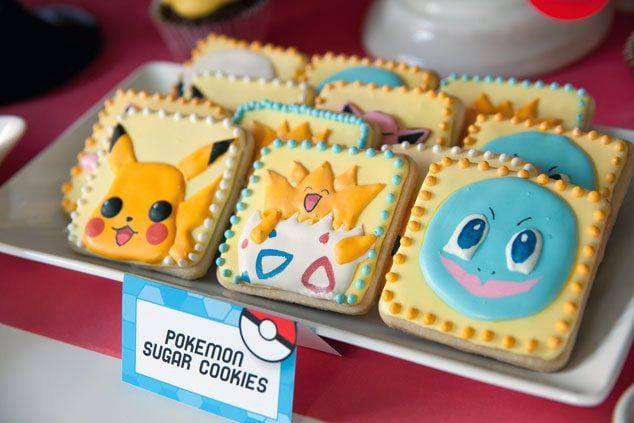 Nikki of Tikkido did another amazing job with the Pokemon sugar cookies. Always in awe of the details she puts on her cookies! It was funny to watch all the kids trading their cookies like they trade their Pokemon cards.

As a side note…custom cookies get expensive. If you want a less expensive option, pick up yellow frosted cookies at the grocery store! 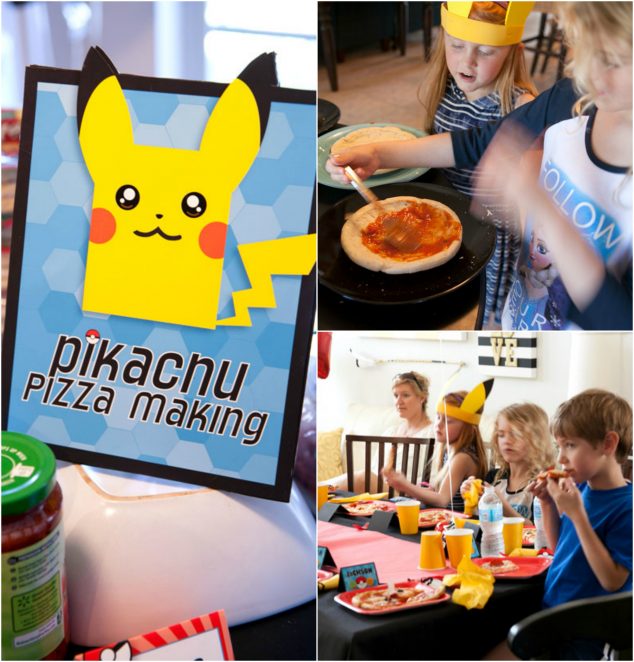 This was a lunch-time party, so we had to fill the kids up with something nutritious before we let them loose on the cake and cookies. We did a make-your-own Pikachu Pizza bar that also served as a party activity. Kids love anything all that much more if they can make it themselves! My local grocery store puts the pre-made pizza shells on B1G1 special all the time, which made this a super inexpensive menu item in the end!

After we ate, we played. A LOT. We had the perfect games and activities for all the Pokemon trainers at the party.

Usually, we do something like a bounce house to keep all the kids involved and playing at birthday parties but due to a new too-small yard we couldn’t this year. Instead, we set up a bunch of minute to win it style games with Pokemon themes and a few craft stations to keep the kiddos entertained. 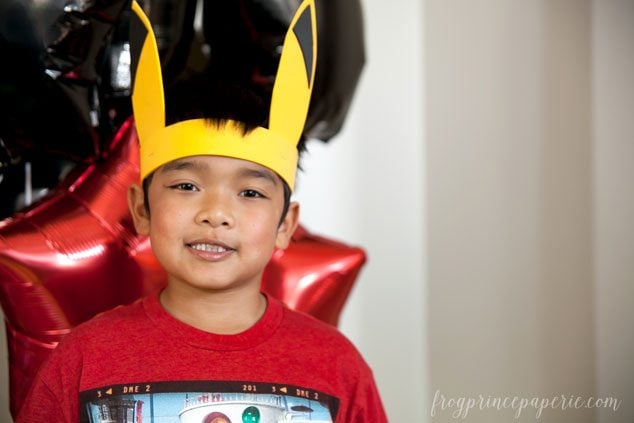 The surprise hit of the party were the Pikachu ears. The kids wore them almost the whole party! If you’d like to see how the Pikachu ears were made and download the free template, please visit my Pikachu Ear Tutorial page. 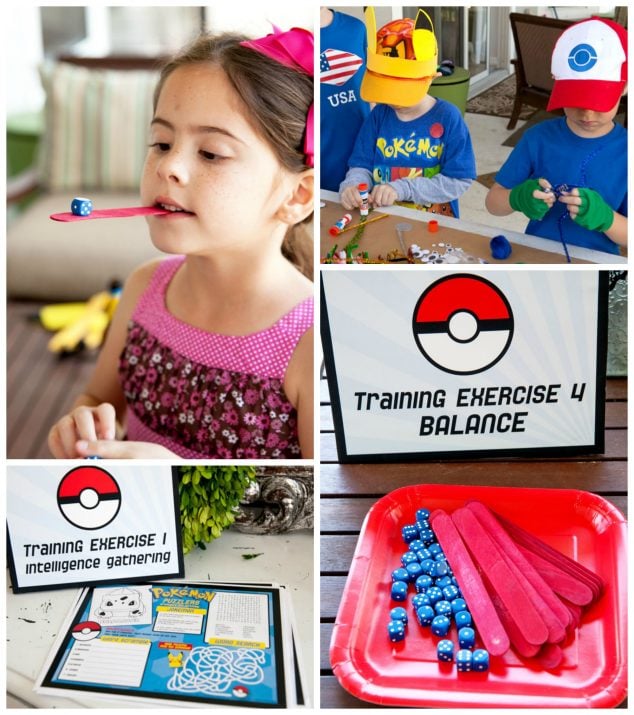 A variety of Pokemon party activities and games will keep the kids engaged through the time you have with them and having a great time.

Now, kids are as kids are, so all my carefully planned rotations through the stations got completely shot as they wanted to run wild like they’re used to doing when they come over. It was fine. The stations were diversions as they wanted, and everyone still had a blast! My best advice when it comes to parties is to plan things to keep them busy, but don’t be wildly disappointed when other things happen. It’s all about them having fun and you need to keep sight of that.

I’ve got a whole other post dedicated to the Pokemon party games and activities for this party that goes into each activity in detail. See my Easy Pokemon Party Games here.

And when they weren’t playing on the playset or the stations, we had a special guest, Kraut, who was happy to get in on all the fun with the kids. He was one popular pup that day. 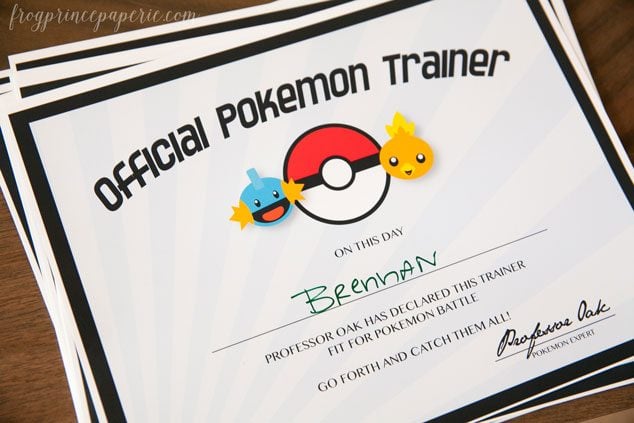 Pokemon trainer certificates are a great way to send off guests at your party!

The party favors were a combination of craft things the kids did as the party went along, and a few fun things I found to toss in their bags.

At the end of the party, I presented each kid with their own “Official Pokemon Trainer” certificate, suitable for framing. I imagine they’ll be highly valued next to diplomas and such over the years. These certificates are available for purchase here.

Every Pokemon trainer needs a Pokeball! 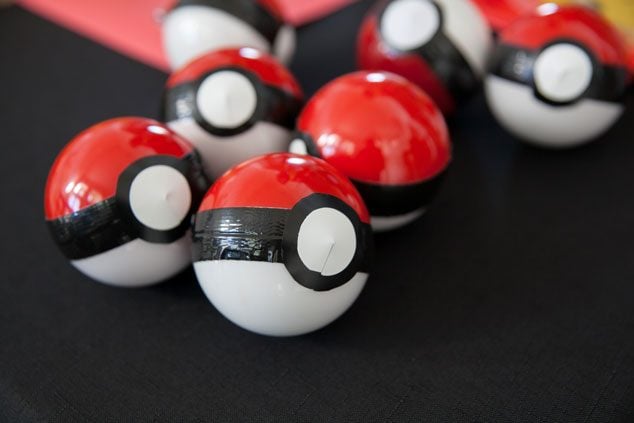 And they were also given a DIY Pokeball to keep all the Pokemon they are going to catch. Tutorial on how to make this super easy party favor can be found here! 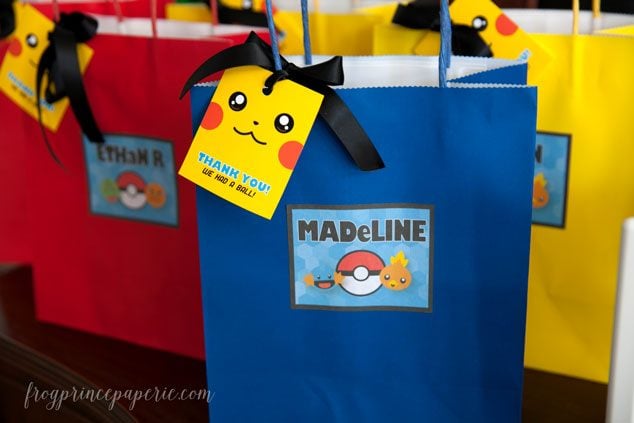 I made large goodie bags for all the kids and put their names on them so they could drop in all their Pokemon party treasures that they got throughout the event. It was easier to keep track of everything that way, and I recommend labeled bags for any party where they do a lot of crafty stuff.

I found a few Pokemon-themed pencils and things to put in the bags as well. Here are some ideas for party favors that the kids liked, and a few that caught my eye as things kids would love:

Another idea is to buy the clear plastic vending machine bubbles and put Pokemon toys in them! 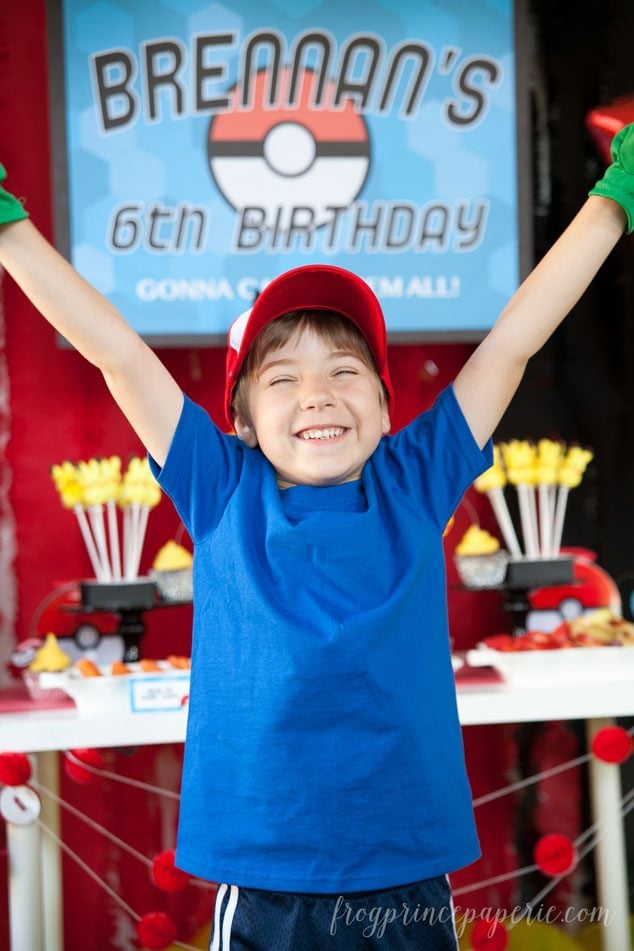 So even with an over-the-top Goldilocks, Dragon and Motorcycle birthday party under his belt, Brennan said THIS was his best. birthday. EVER. And since it was about half the effort for me to put on, I’m going to take that as a score. Sometimes less really is more! […] how cute are these Pikachu Peep Pops? This is a super crafty way to turn ordinary peeps into an adorable dessert that fits your party […]

[…] also a big fan of costumes at parties! (See my Pokemon party – purple hair is so me!) If you don’t have a costume, you can get in the How to Train […]

[…] Pikachu is so cute, and he makes a great decoration! Pokeballs and all the other critters in the Pokemon universe are really a party decorator’s dream. Whether you need Pokemon party ideas for a few decorations or a blowout, get lots of ideas for fun Pokemon party decor here! […]