My young friend Sidney was born a conservationist. I’ve never met another person so enamored with or concerned for animals. She even had her wildly talented mother turn her room into a treetop hut overlooking the Costa Rican jungles–with all the correct trees and animals painted on the walls.When her birthday rolled around this year, she wanted to celebrate with a safari birthday party theme.

I was grateful I was given leave by young Sidney to mix up my animals from different continents. 🙂

Remember when I told you Sidney’s mom was wildly talented? I mean ridiculously artistic. I showed up with the ideas and a menu, and her mom put an amazing amount of polish on them. You’ll see what I mean! 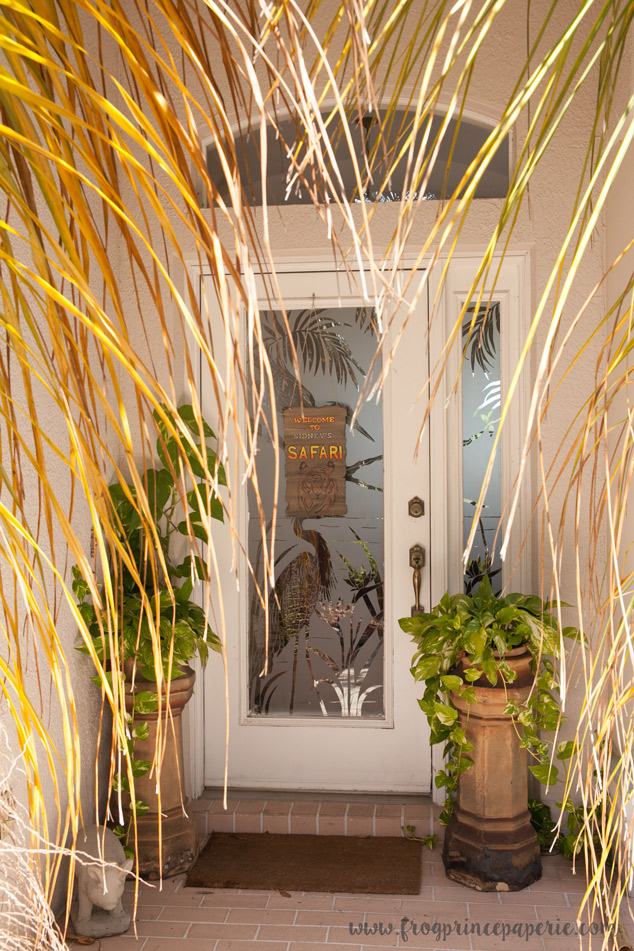 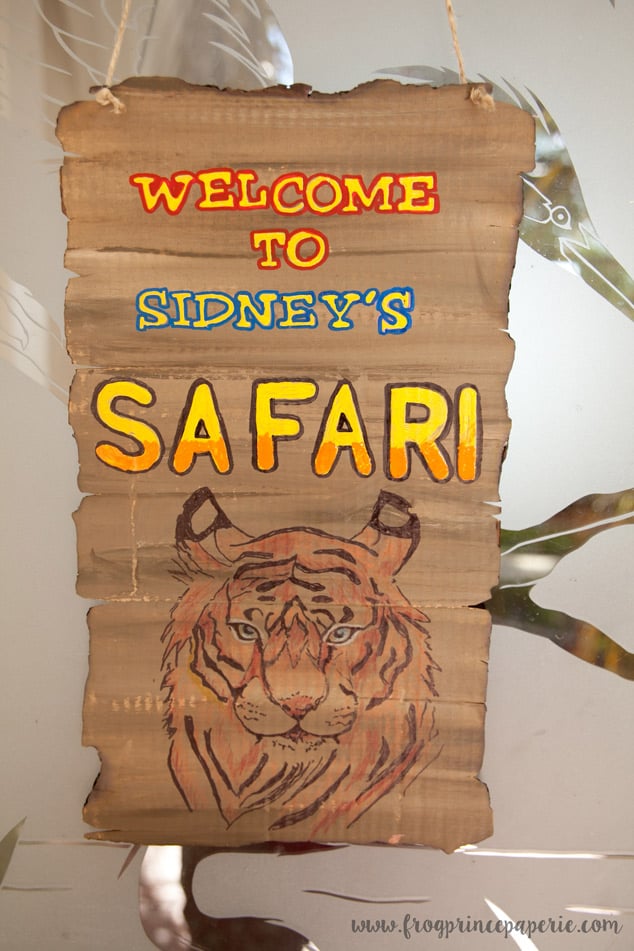 Sidney’s mom, Susan, painted this sign for the front door on a piece of cardboard, then aged it. We’ll give styling points to Sidney for the palm fronds across the entrance! 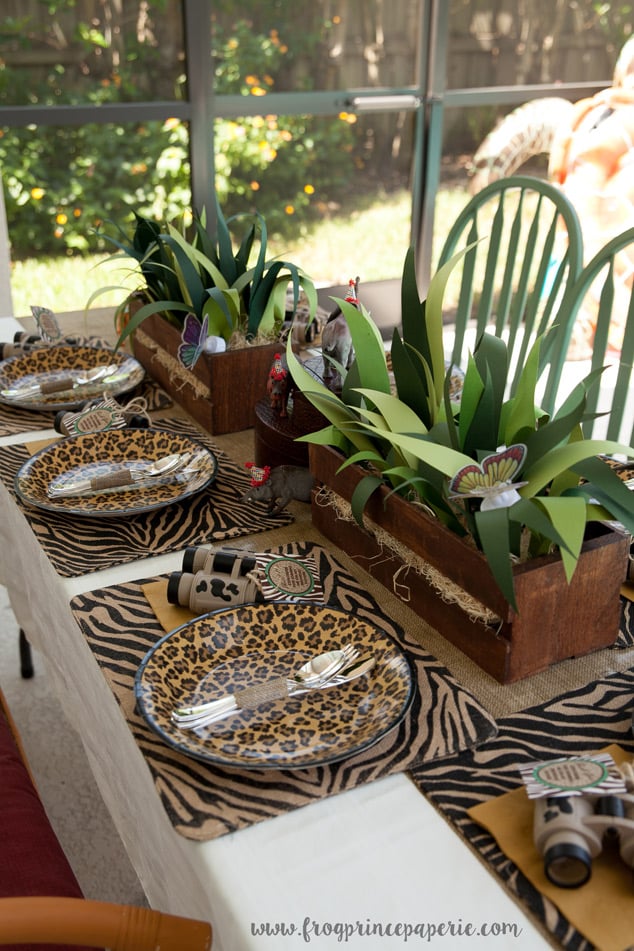 My part was to come up with a table for the party guests to eat at and a dessert table. Just like last year’s Left Shark party, everything had to be done low cost and EASY. We made almost everything from paper, so check, and semi-check! 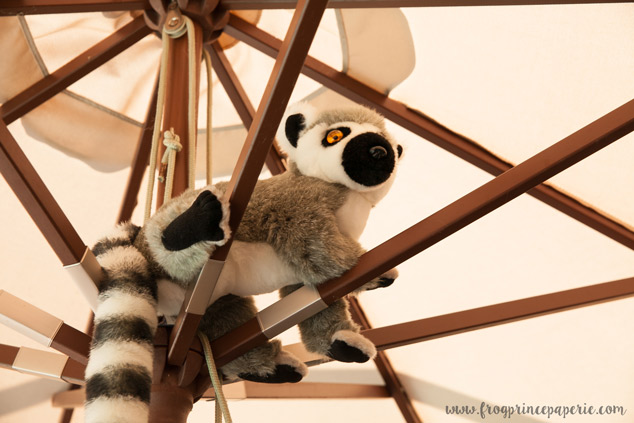 Sidney helped decorate outside as well. Members of her very large collection of stuffed animals were strategically placed around the party. This lemur (buy it here) kept the tablescape company. 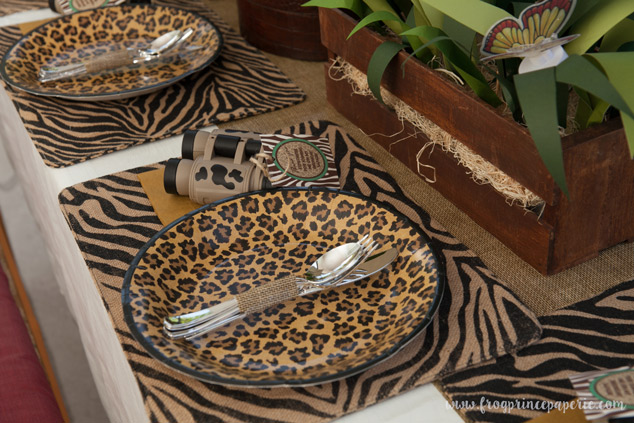 I really lucked out with the table settings! The centerpieces were from a soon-to-be-released party and recycled to fit our jungle/safari theme. I put a few fiber optic butterflies (buy them here) in the thickets to delight the girls.

The placemats and plates were a clearance find at Hobby Lobby, and matched everything wonderfully well! I found paper printed to look like burlap in the dollar bins at Target over the summer and used that for a table runner. If you can’t find one of those you can buy a real burlap runner similar to it here. 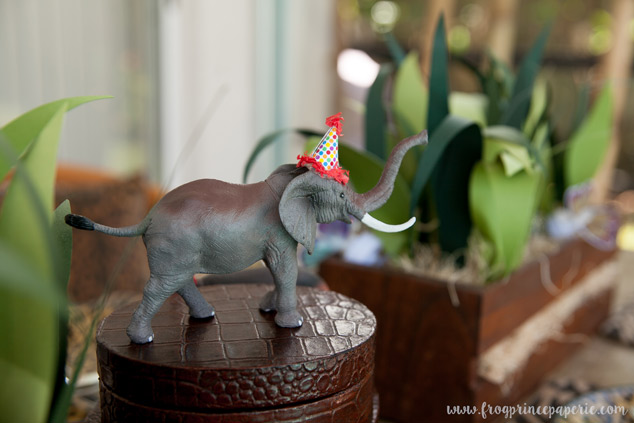 Seriously, my favorite part was the animals in party hats. My helper made these, and I love the detail! She even cut mini-festooning for the edges after starting with a few plastic safari animals (buy them here). 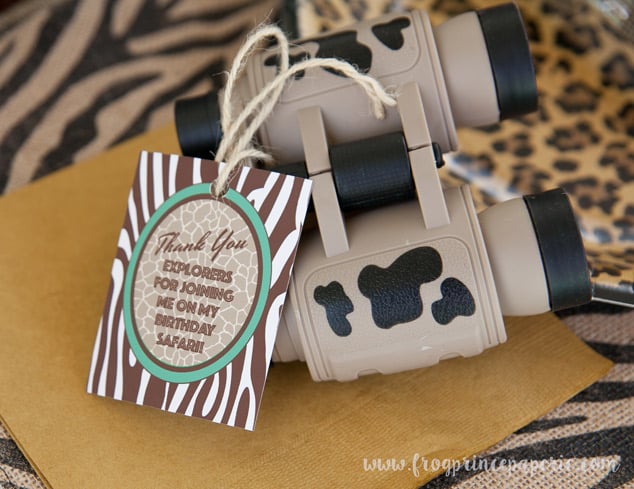 Each place setting also sported a pair of binoculars that were also a party favor (buy them here.) Sadly, I didn’t catch a picture of the safari helmets (buy them here) the girls got as well–but they had a great time with them! Everyone decorated their helmets at the beginning of their party with a little glam. 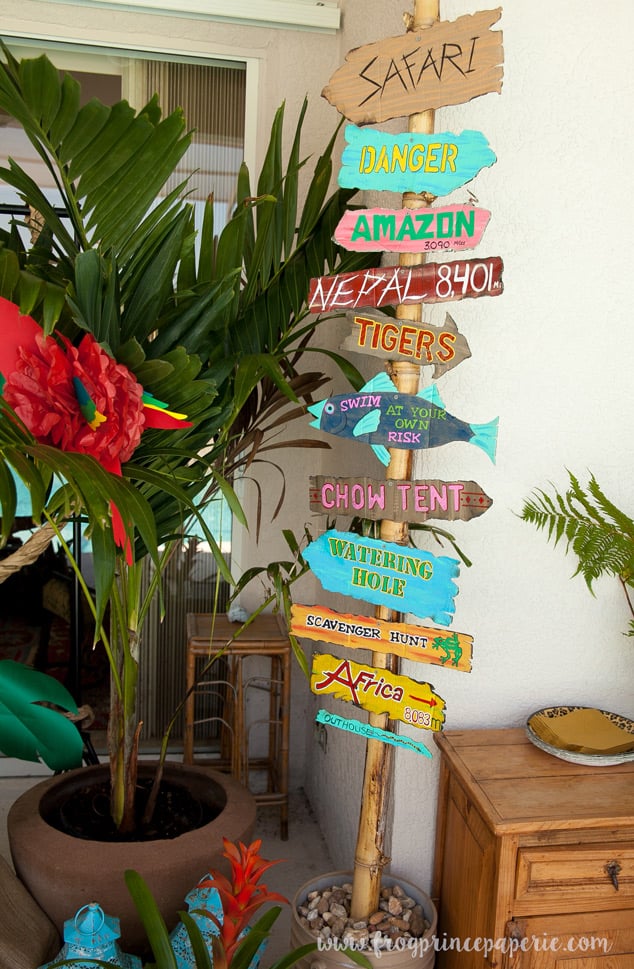 Back to my amazing friend Susan! She made this really fantastic guidepost for the party. Again, she used cardboard to make each individual sign. After painting them, she burned the edges to age the signs, nearly giving Sidney a heart attack that the art was going to be ruined in the process. (Ha!) 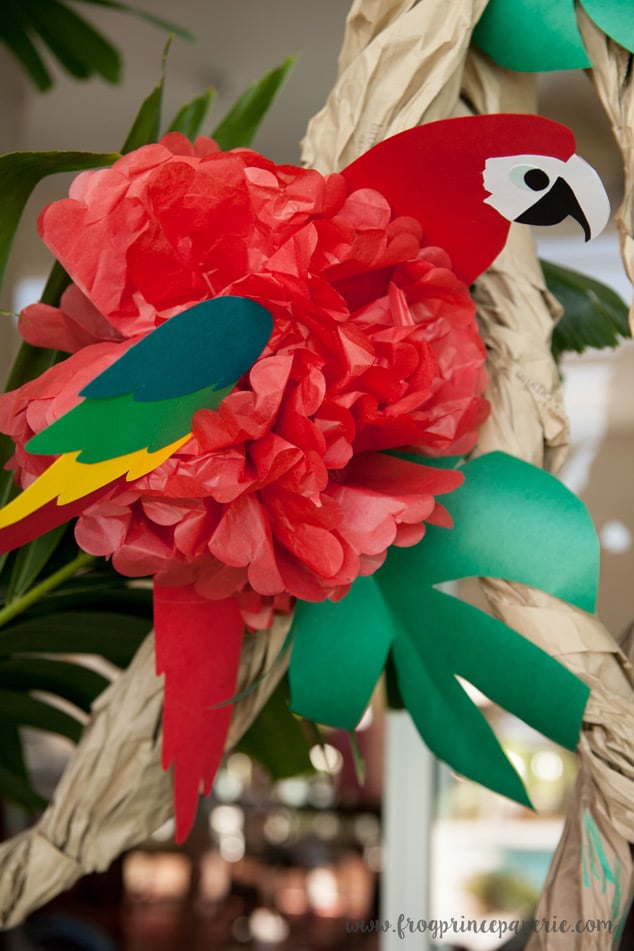 My helper that made the animals with party hats also designed some templates for a few tissue paper pom parrots. The parrot is sitting on vines made from twisted brown craft paper and freehand cut leaves. CLICK HERE TO LEARN TO MAKE THIS DIY TISSUE PAPER PARROT. 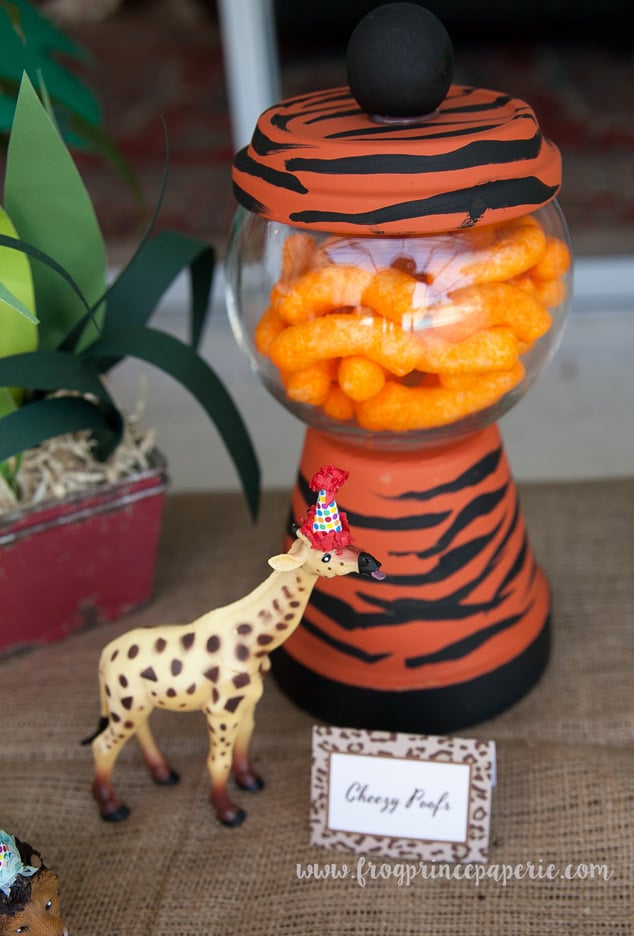 We laid out a few snacks for the girls while they were running around and swimming (this was a pool party), and made a few in-theme containers for them to go in. Accompanied, of course, by animals in party hats! 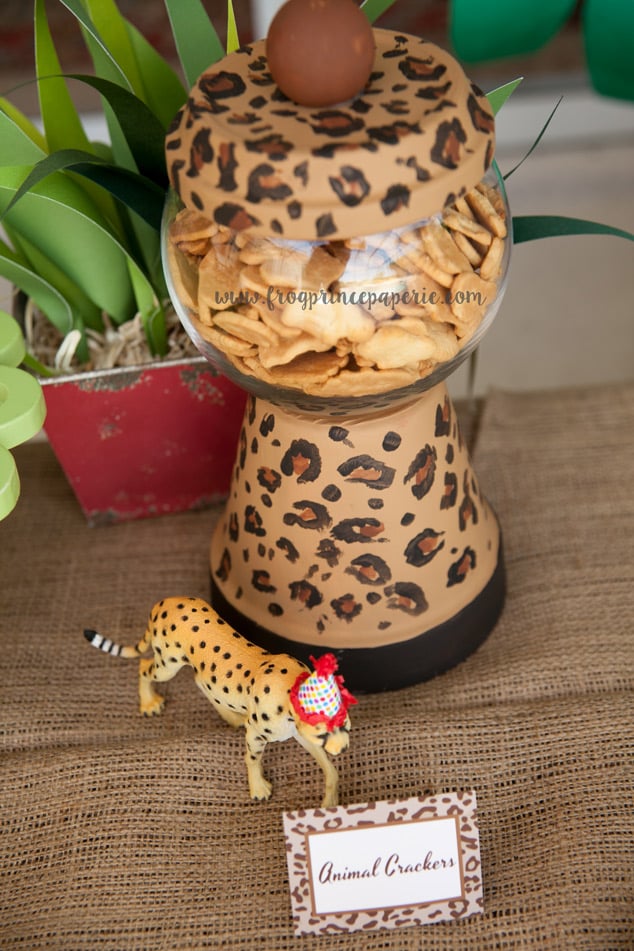 The cheetah was my favorite! 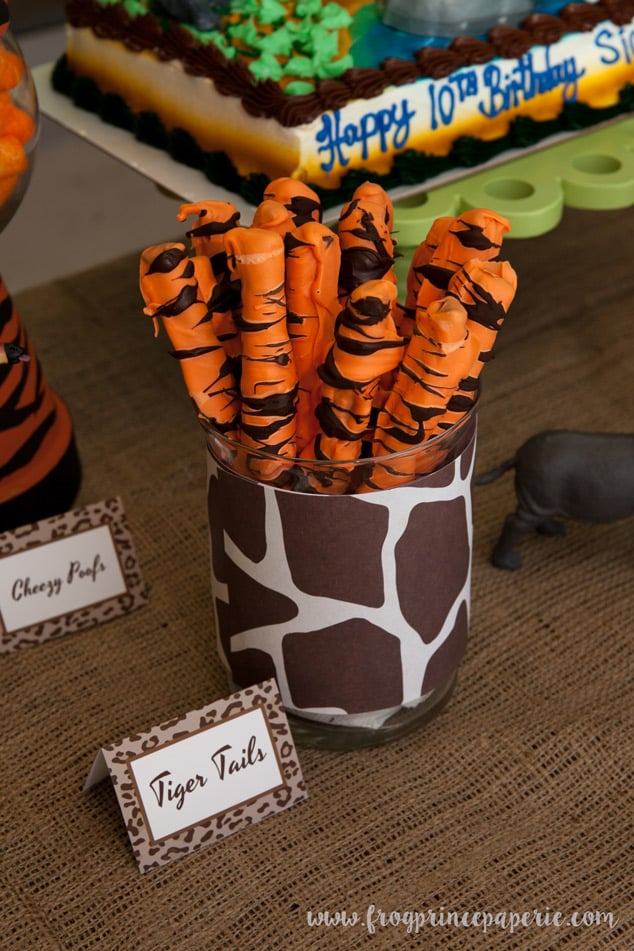 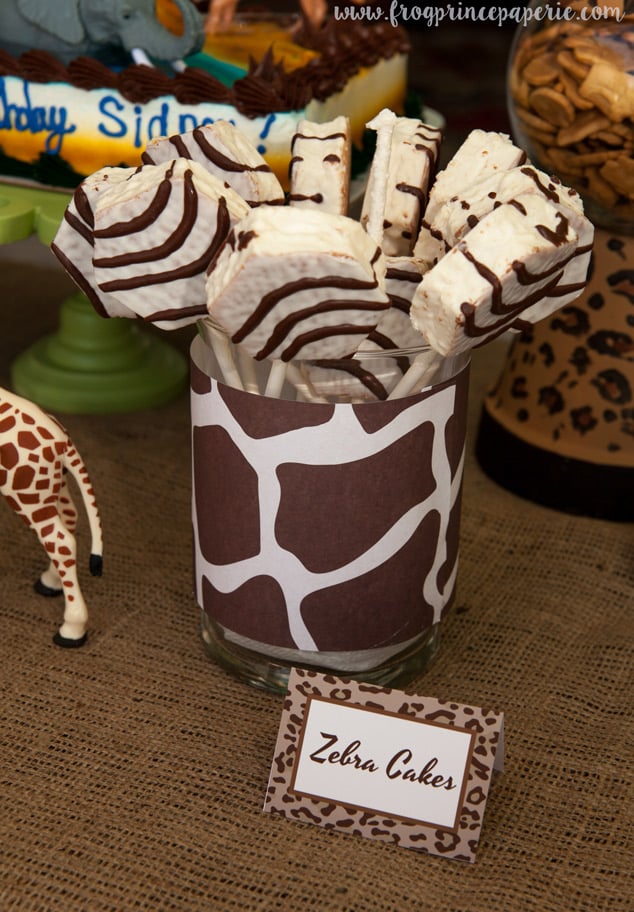 Nothing could be easier than these Zebra Cake Pops! Buy the Little Debbie snack cakes (like these), and put them on sticks made for holding cookies (but them here) and pop them in a vase. Done! 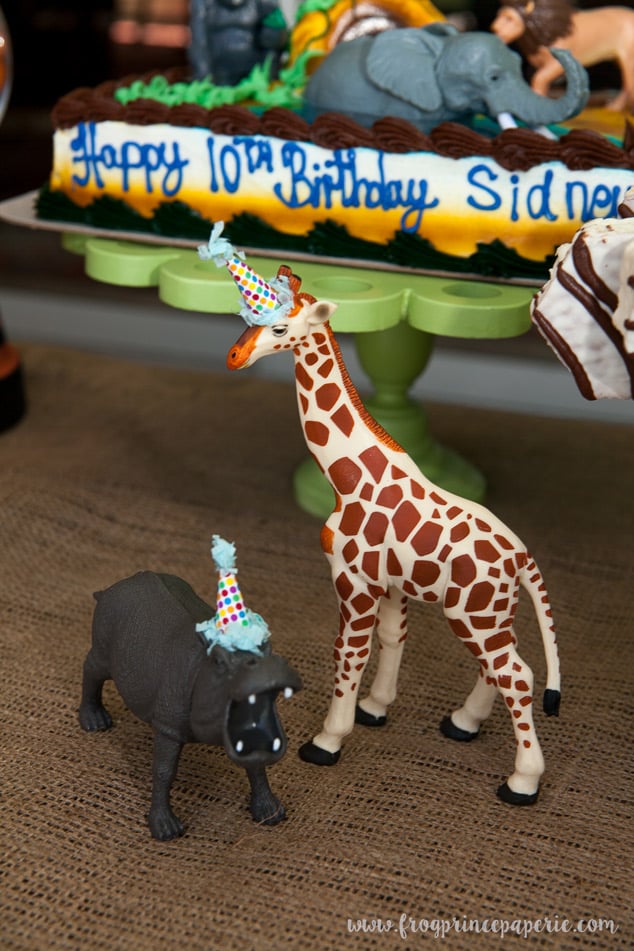 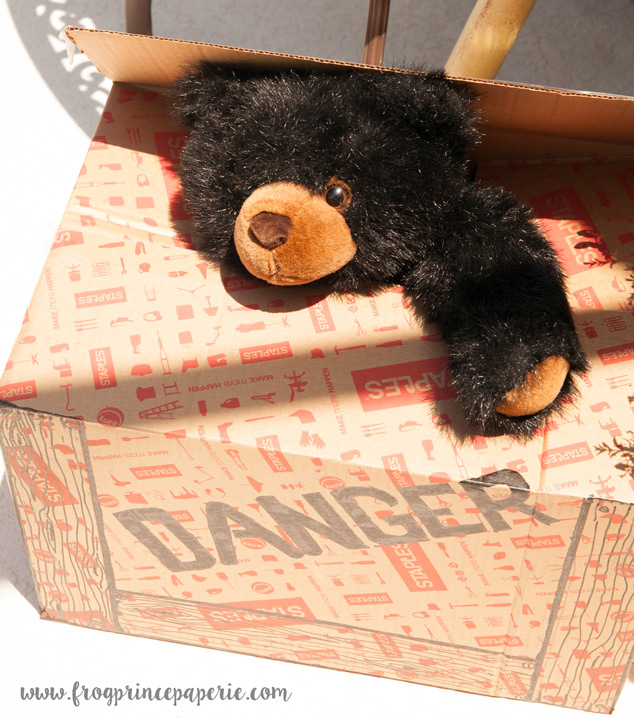 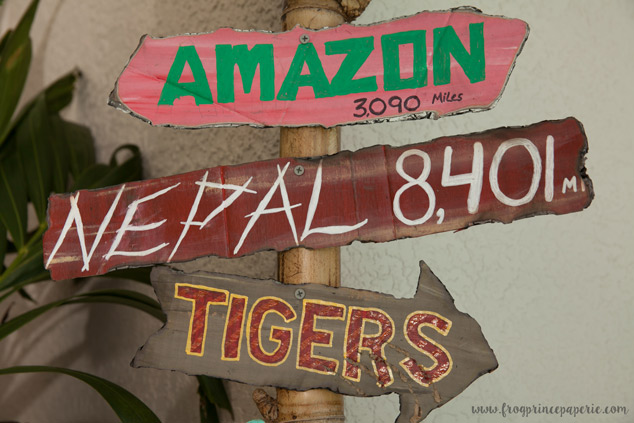 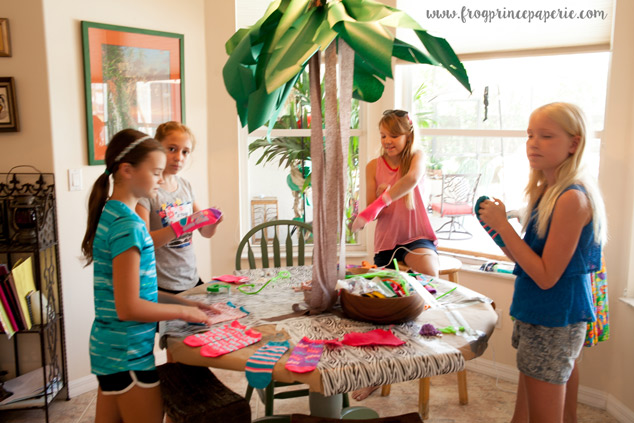 Sock puppet animals. Since this was a pool party, we didn’t have to plan much, but we worked in a craft for the girls to do while we waited for all the guests to arrive. We put out socks and a wide variety of ribbons, pipe cleaners, google eyes and material and told the girls to make sock puppet animals. Personally, I thought it would be a

Pith Hat decorating. The plastic hats got the royal treatment using the same supplies as we put out for the sock animals. This was really a two for one for prep work!

Scavenger hunt. Sidney’s dad created a scavenger hunt that had them running all over. He did a little bit better than I did at Maddie’s Glam Emoji party, as the girls took a little longer to get through to the end to find the treasure chest. Which coincidentally, was a chest of silly string they proceeded to have a battle with in the front yard.

Everyone in attendance had a really fantastic time, and Sidney’s mom and dad’s extra special touches made the party really spectacular! How to make a DIY Tissue Paper Parrot for Luau Parties

[…] few years ago we made these DIY tissue paper parrot decorations for a safari party for our little friend Sidney. The paper parrots have been wildly popular on Pinterest, and after […]

[…] can move on to making all kinds of other party decorations–like tissue paper flamingos and tissue paper parrots. […]

I love the cheese puffs canter how can i make that