Affiliate links are included in this post. They cost you nothing, but help pay my server fees!

Of course, Auntie Paula was more than happy to make every one of his Blaze Birthday wishes come true. So I caught a few episodes to get in the know for our small family party.

I often speak about balancing the Pinterest mom decorations with a hefty dose of Amazon mom sensibility. There was a ton of that going on with this party. There wasn’t a lot of time (or reason) to do a week of party crafting, and I had to fit everything in my car and drive two hours away to set it up.  We went minimal. 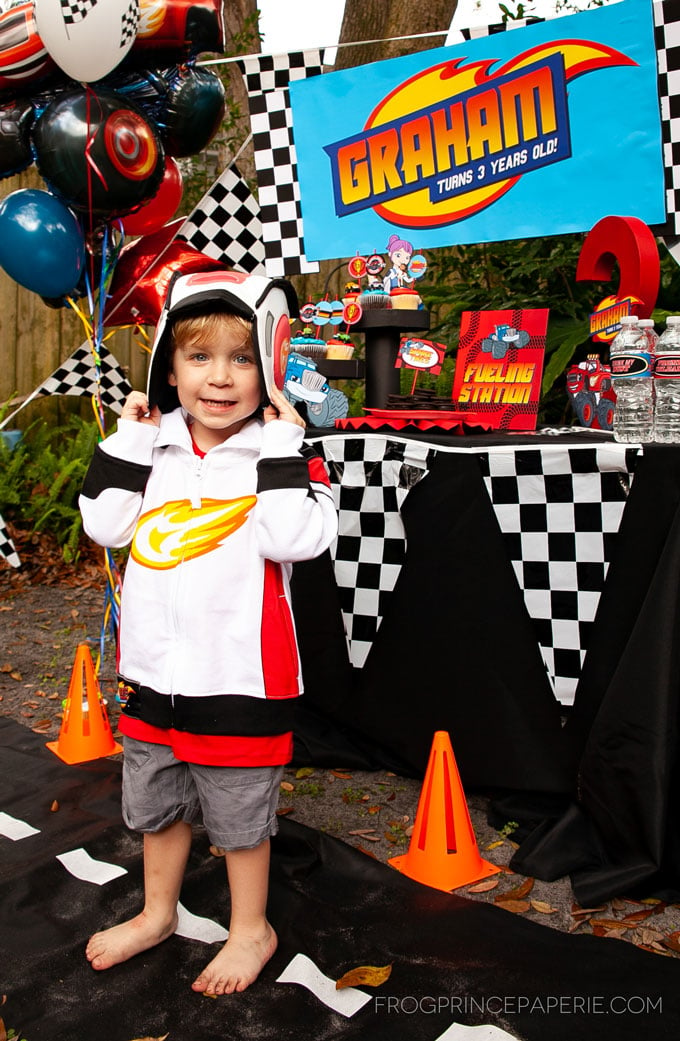 Small family affairs don’t call for overblown decor and fancy details in every area of the house. For a small family party like this, the only one to impress is the birthday boy.

We turned the backyard into a Blaze and the Monster Machines wonderland. The birthday boy was ecstatic!

Blaze and the Monster Machine Costume for the Birthday Boy

When a character is the theme of the party, we ALWAYS get a costume for someone. (See: Pokemon Party and How to Train Your Dragon Party.) None of the adults really wanted to dress up like monster trucks, so we dressed the birthday boy up like the cartoon show’s monster truck driver, AJ. 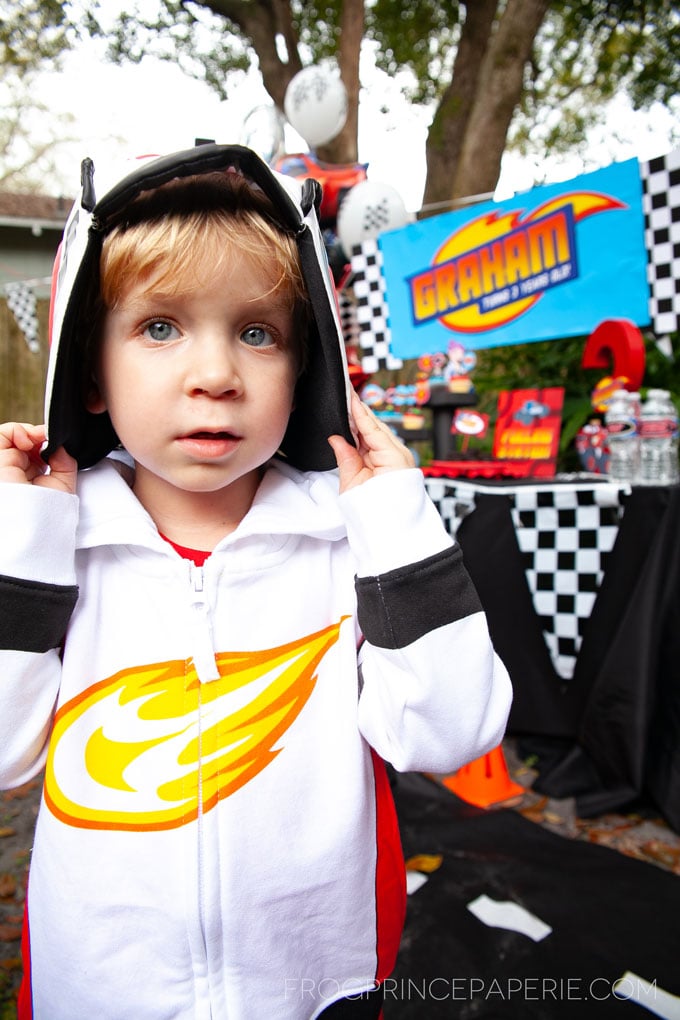 February in Florida is almost cool, so this super cool AJ hoodie sweatshirt and AJ helmet I found on Amazon was layered over a Blaze and the Monster Machines t-shirt I made with my Cricut machine. 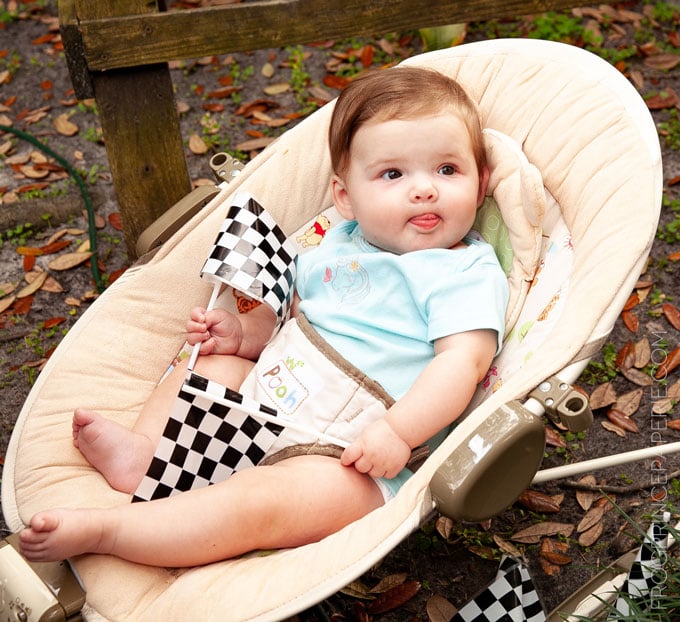 Little sister was a pretty good flag waver. I had a t-shirt all ready for her, too, but sadly, forgot it at home!

Is this newly minted three year old going to remember this Blaze and the Monster Machines party? Likely not, but his parents (and aunt) will and will pore over the pictures for time to come. I focused decorations on making lots of Blaze photo ops. 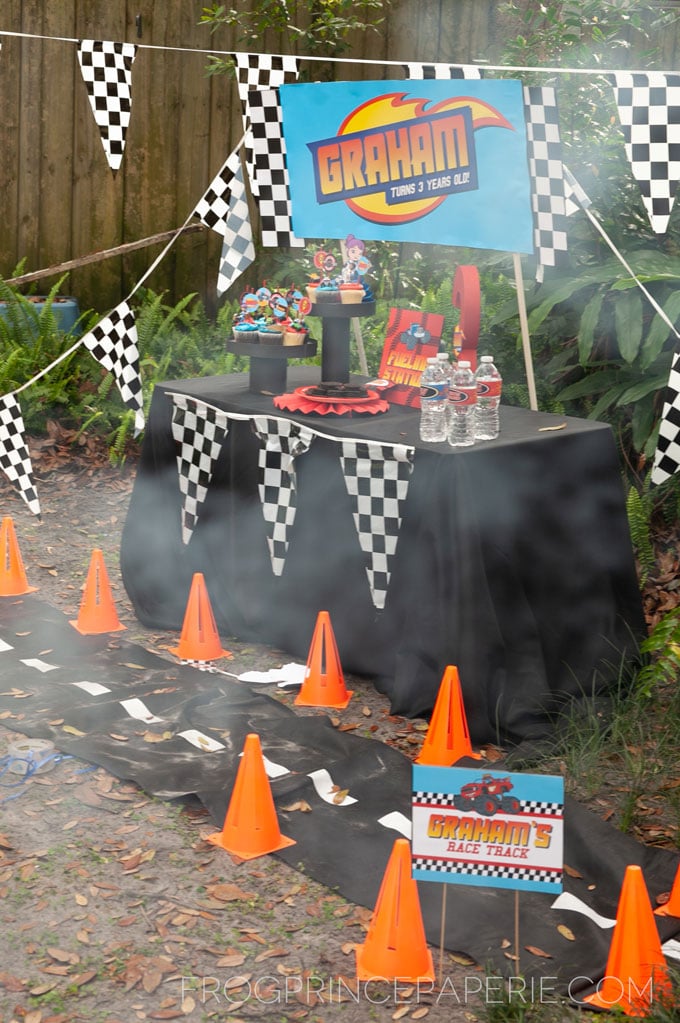 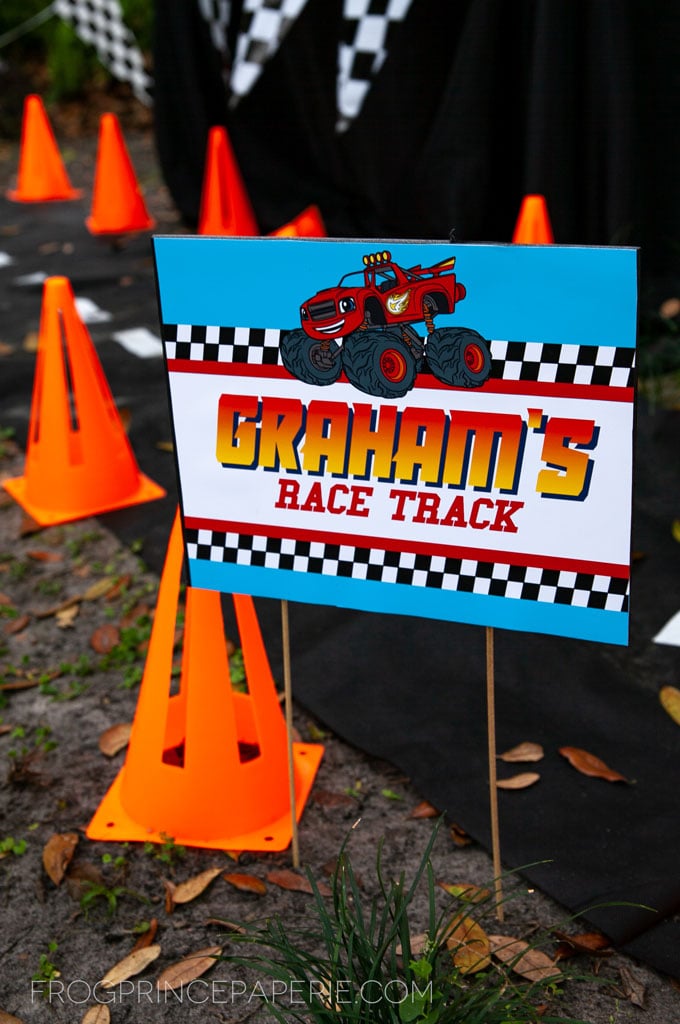 Checkered bunting ran around the yard. I have a DIY tutorial for checkered flag bunting available here, but sometimes you just need fast…so I bought 100 feet of this bunting already made.

I found a strip of race track runway to put down to run along like a race car.  Or monster truck. You can find the traffic cones at the Dollar Store, or for the same price, have them shipped from Amazon. I’m lazy, so you know what I did. 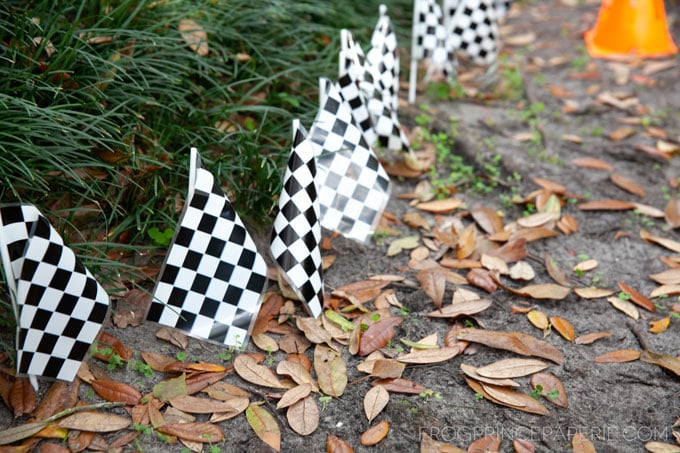 The birthday boy had a ball helping his cousin put out dozens of checkered flags. 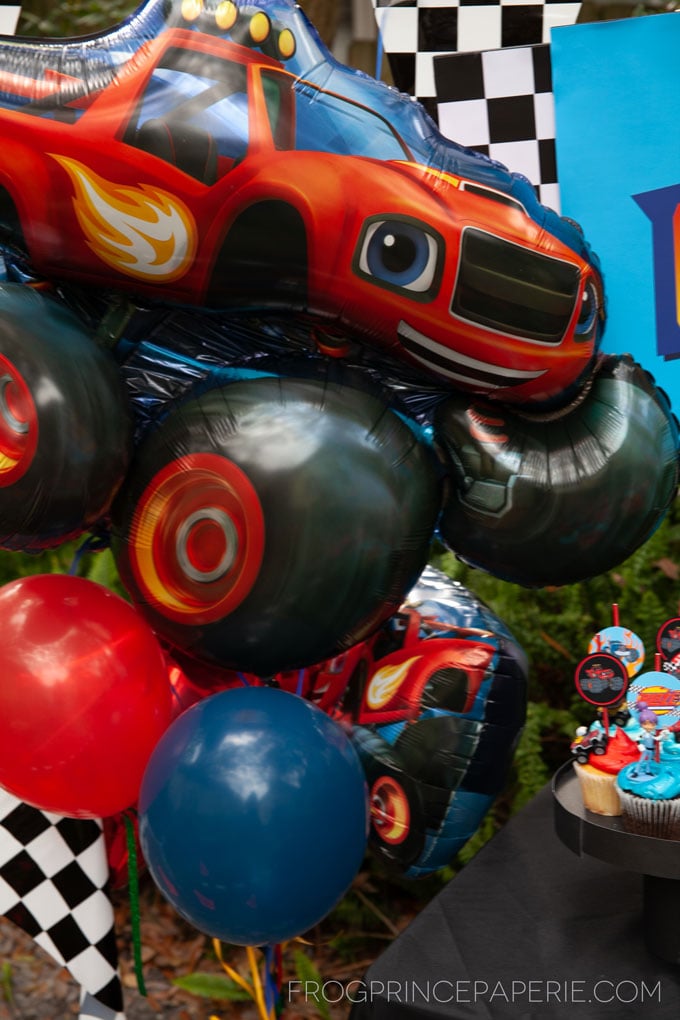 A Balloon Time helium tank and a pack of Blaze and the Monster Machine mylar balloons also made for some pretty classic pictures. And the birthday boy loooooved having the monster machine balloons around the house AFTER his birthday party was over. 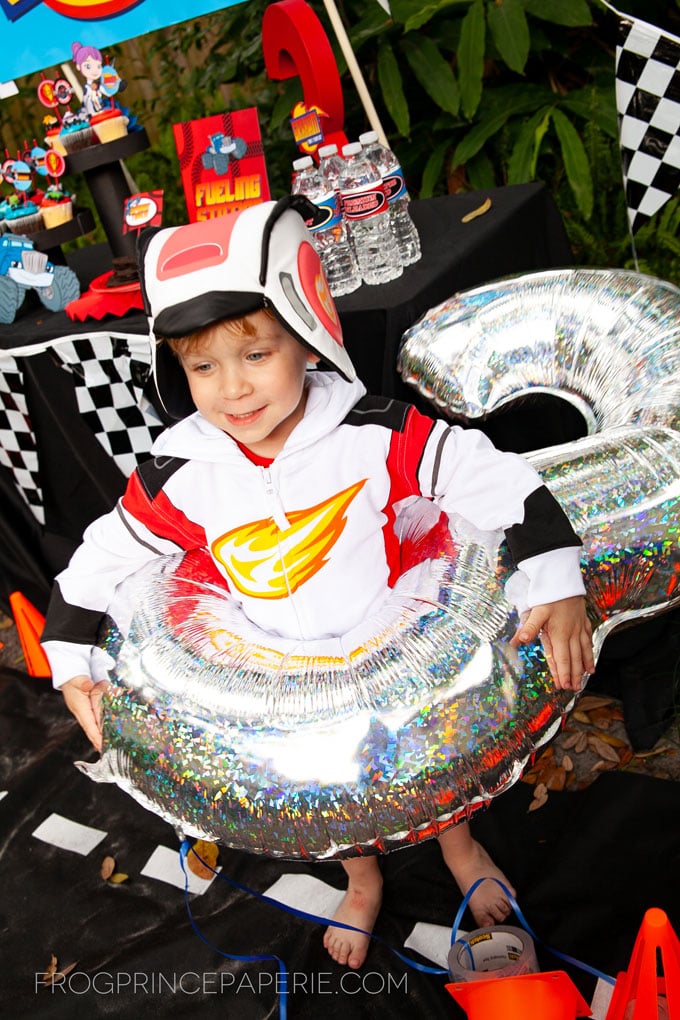 Don’t forget the giant number! Although our “3” made an escape after some enthusiastic play with Graham. It watched us from up in the trees for most of the party.

At every birthday, a proper display for the birthday cake is a must. Also, it gives you a place to focus your decorations if you’re not going all out. 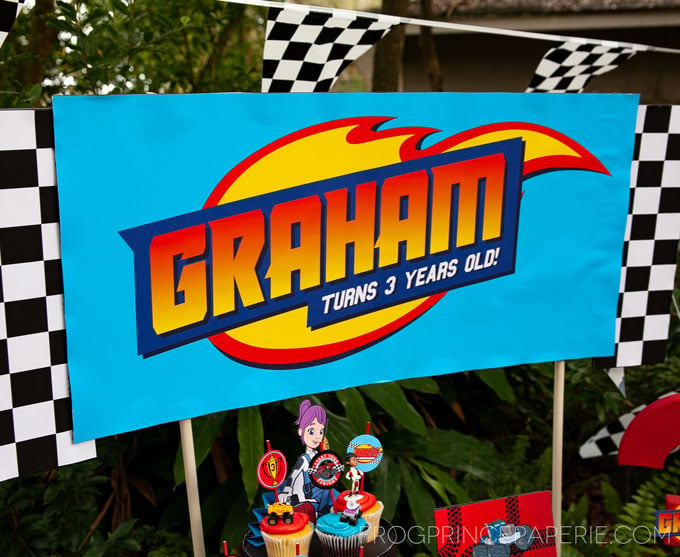 Backdrops are easy to do and make a good visual punch! I designed and printed this poster for the party and mounted it to black foam core. I put it on a couple of long sticks and pushed the sticks into the ground to lean up against the table. 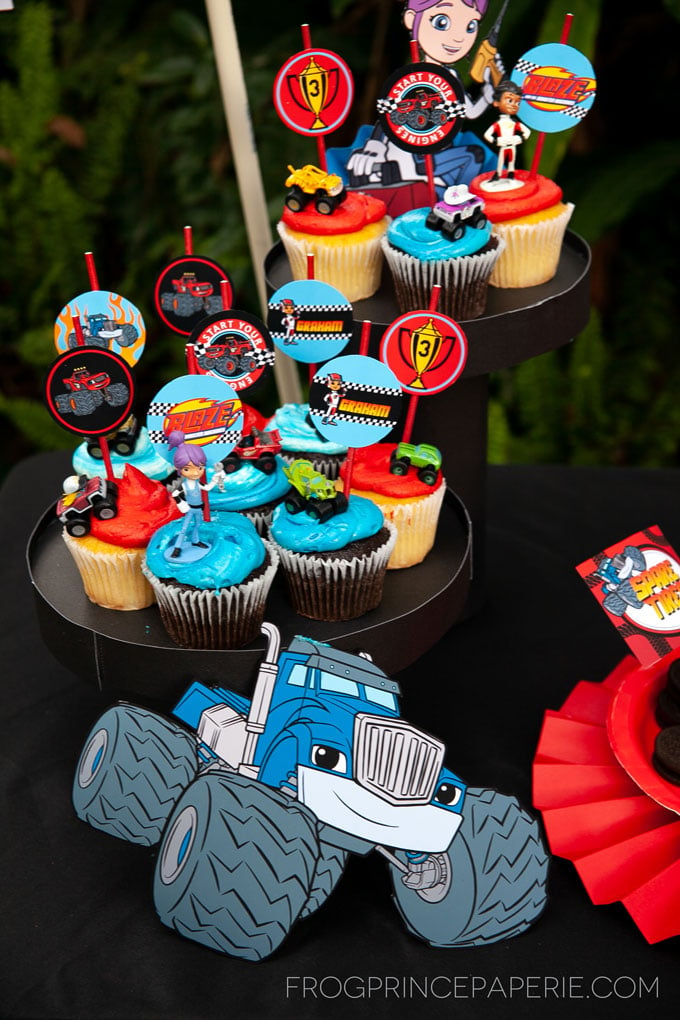 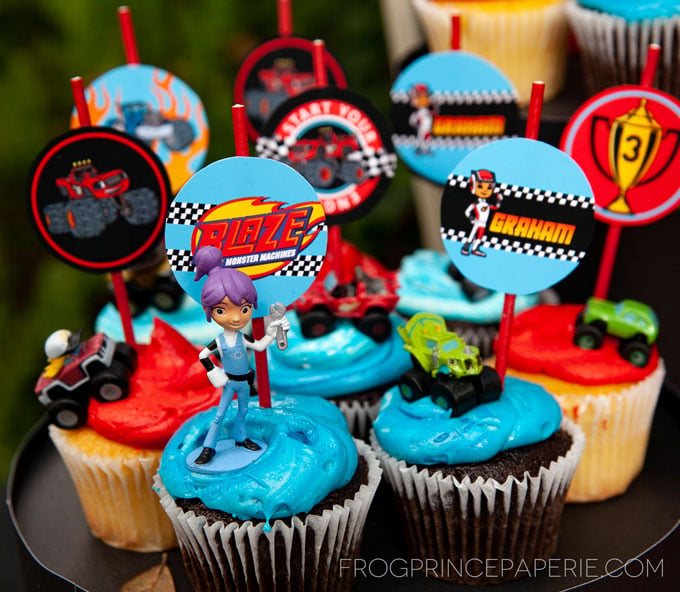 Blaze and the Monster Machine cupcake toppers brought Blaze and his friends to the party in an easy way and really added a lot of color to the party table. I also found these small Blaze figurines on Amazon that could be played with afterwards. They were also a big, big hit.

Like the printables? See the package to purchase here. 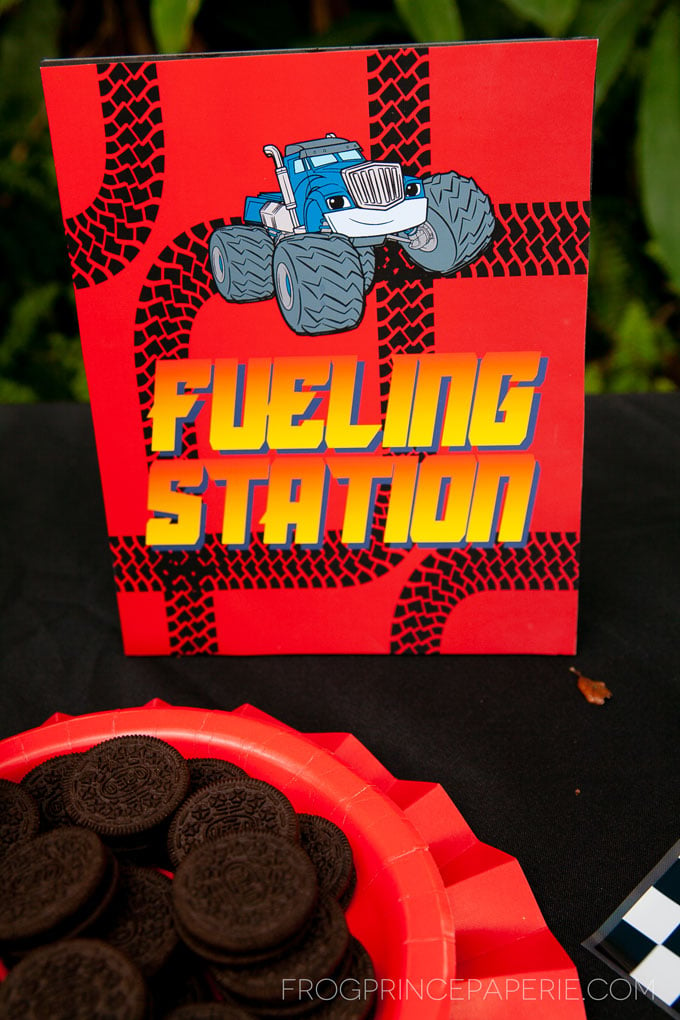 Corny signs at a kid party? Also another must-do. 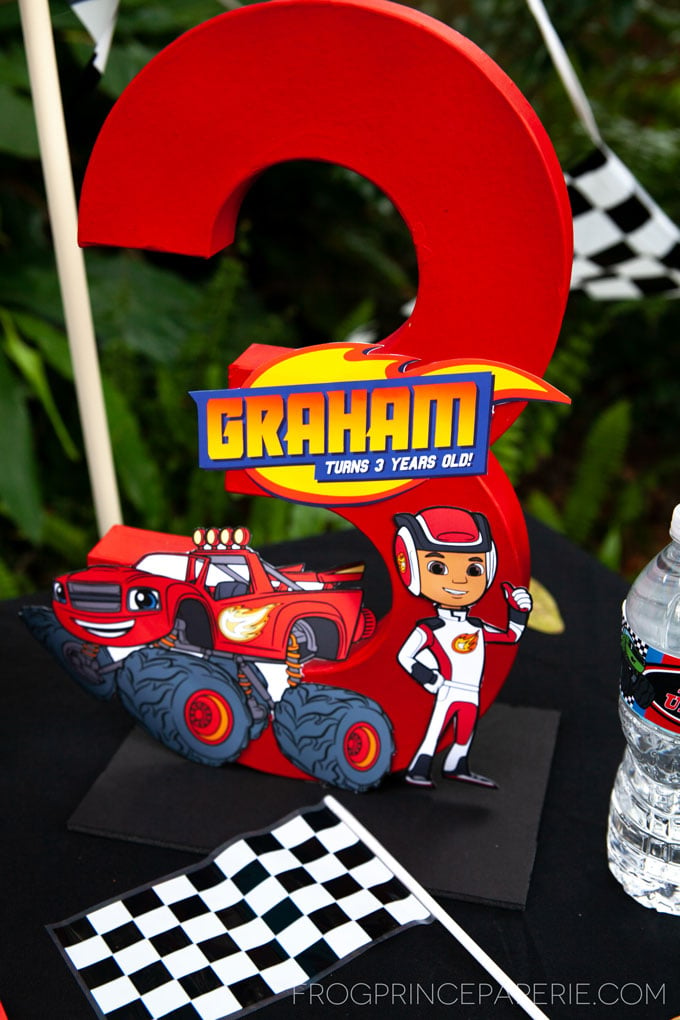 This table decoration could also be a centerpiece if you were having a larger party. A paper mache 3 was painted red, then glued to a piece of black foam core to help it stand. A few graphic cut outs of AJ and Blaze glued to the front made it party-ready; these are included in the printable package for purchase. 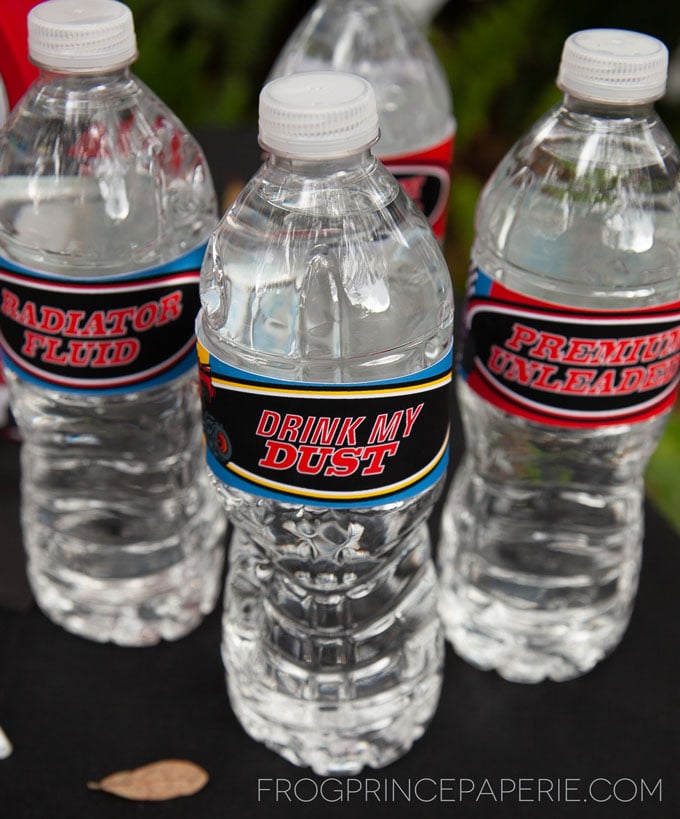 Another place you can add a little bit of party whimsy without a lot of effort are your water bottles. A few race car/monster car water bottle labels helped add some more racing atmosphere. 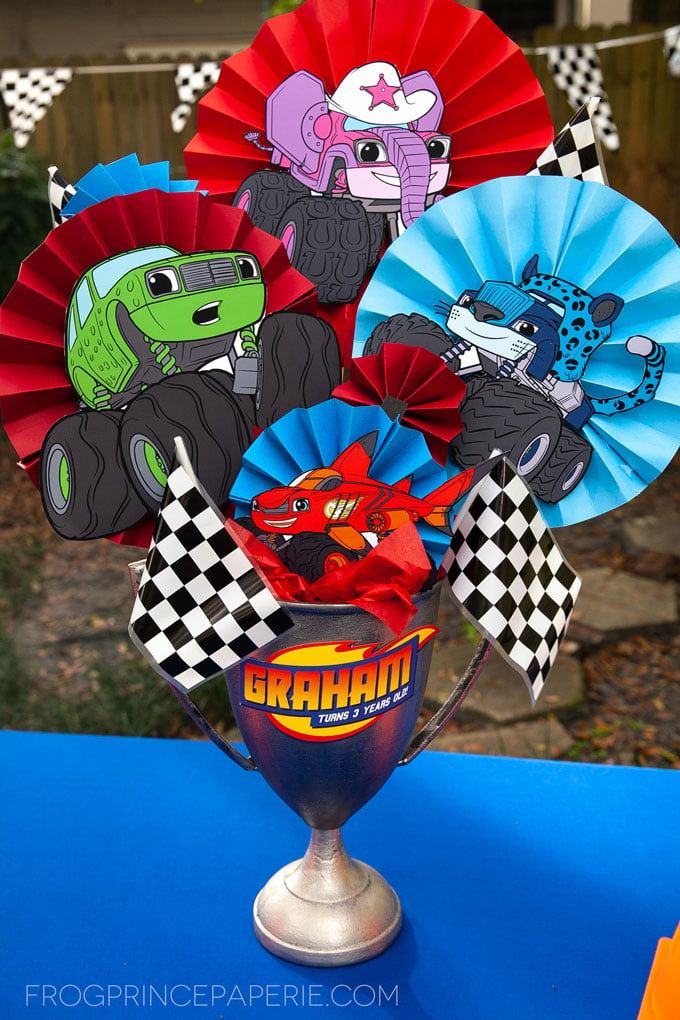 A few years ago I found this trophy cup. I’ve used it again and again for all sorts of parties. If you find one, definitely pick it up as they are very handy props to have. If you don’t luck into one, a vase will work perfectly fine for an arrangement like this. 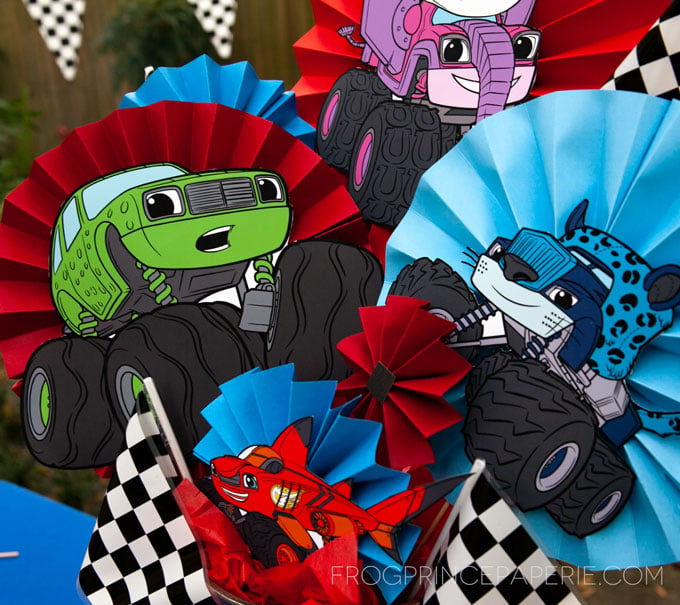 I made paper fan circles in a variety of sizes, glued them onto sticks and cut out clip art of the Monster Machines.  I then arranged them into a block of floral foam I stuck in the cup. The centerpiece was finished off with a few checkered flags and tissue paper. 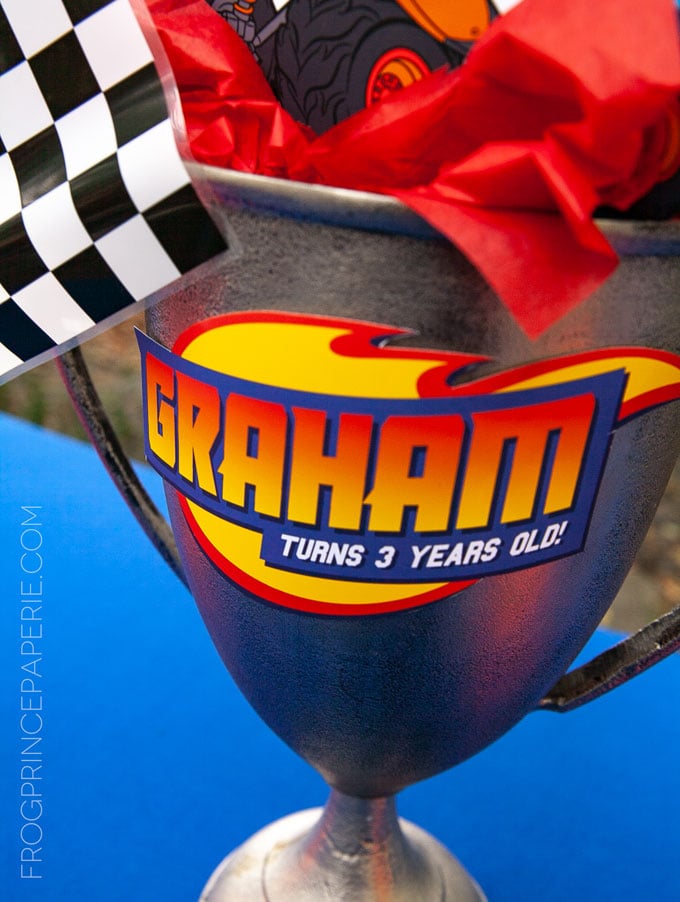 And a fun personalized graphic for the front of the cup. 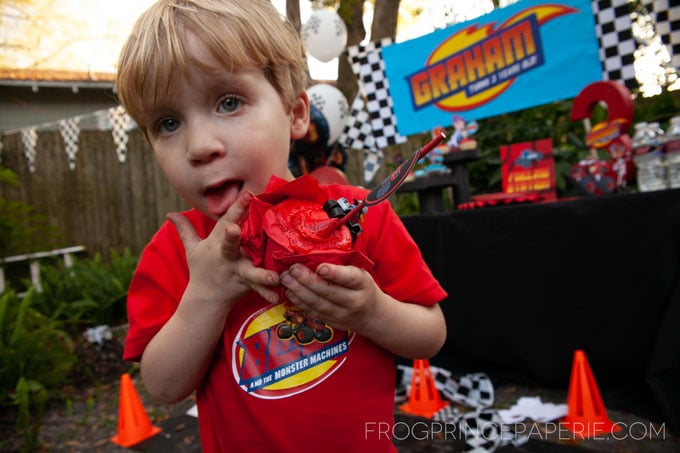 Since there were no friends in attendance, we skipped any party favors or games this time around. The birthday boy had plenty of fun playing with cousins, sneaking oreos, opening presents and eating cupcakes. It was perfect.

If you’re interested in the graphics you see in this party, see the set for sale here.

Hope this gives you some inspiration for an easy-to-do, yet photo worthy DIY Blaze and the Monster Machines birthday party of your own! Christmas T-Shirts for your Cricut Machine

This is so awesome! Would you consider doing a personalized printable set?

Certainly! Send me an email :)