Being at home on New Year’s eve with the kids always seems like it’s going to be hard. Can you entertain them enough to make this memorable? Are they going to love New Year’s eve because of what you’re doing? Is anyone going to bother to stay up until midnight?

What I can say is that you can positively throw a little party at home with the kids and family on New Year’s Eve to celebrate and 1. make them enjoy the experience, and 2.  get them in bed when ever you choose.

Before they are old enough to go to New Year’s Eve parties on their own, just putting forth the effort to make a big deal (even a little deal) out of New Year’s Eve is a bonus in their book. Don’t underestimate yourselves, mommas!

If you have a Cricut Maker machine, making New Year’s Eve family fun is even easier! Here are a few things you can do to make New Year’s Eve at home with the kids completely amazing for everyone, even you!

It wouldn’t be so funny if I was completely alone in that, I know most of us with kids don’t really want to stay up until midnight anymore, and our kids are monsters the next day if they see the clock strike 12.

Point is, making a pajama party out of your family evening makes it instantly festive! Costumes, fancy outfits or even a special pair of pajamas makes a party. These New Year’s Eve pajamas were made in about 10 minutes apiece! Completely worth the effort.

Parties are more fun with a hat

Isn’t it funny how parties just seem to be a little bit more fun when you’re wearing a costume? Party hats on New Year’s eve are sort of a requisite costume. You have to have it!  Here are two party hat designs – one cone party hat and one tiara – but you can make them at home on your Cricut to make an New Year’s Eve at home with the kids a little more fun. I’m giving instructions for the colors we used, but feel free to use whatever happens to be in your scrap stash! 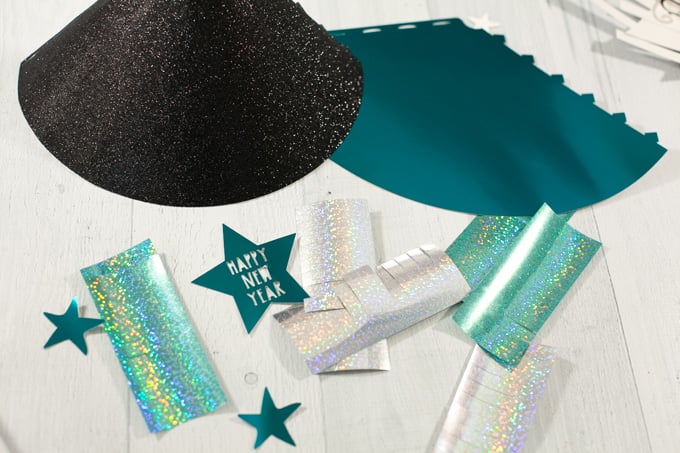 Cut out all the bits and pieces. The base hats should be out of card stock, the pieces that stick onto the hat should be vinyl on the tiara. It’s OK if you stick with glitter card stock for the cone party hat as it is only one piece unless you decide to do all the stars. 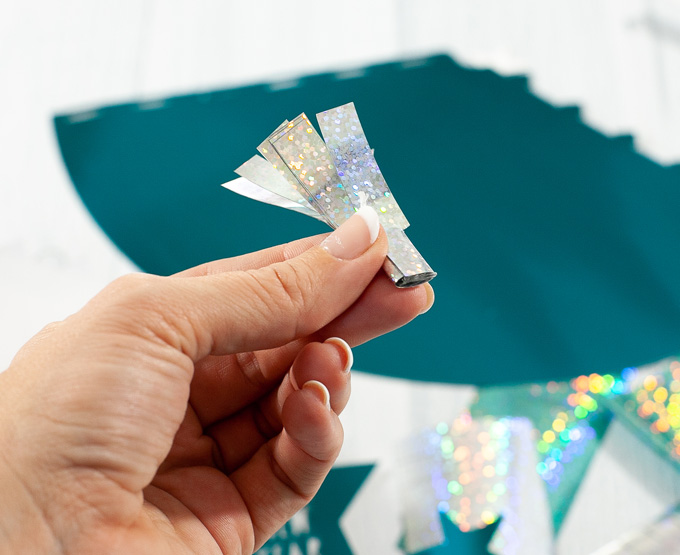 For the cone party hat, roll the fringe bit of party foil into a tight circle and tape around the base. 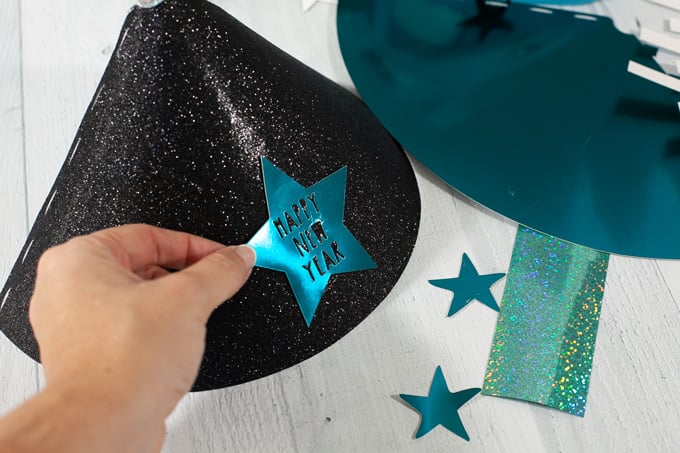 Hot glue the star to the front of the hat, Hot glue the fringed to piece to it to the inside of the party hat. 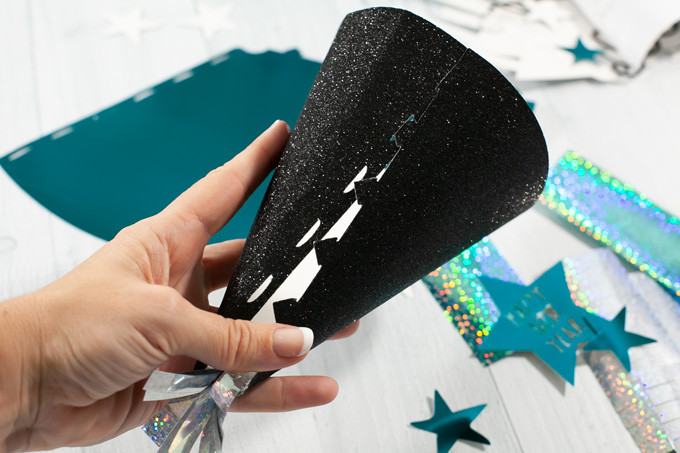 Once the glue is set, gently roll the hat together and insert the hooks into the pre-cut holes. To make sure everything stays put, I like to run a bead of hot glue along the inside of the seam of the hat.

If that cone hat does not look decorated enough for you, add stars or other pieces until it’s perfect. 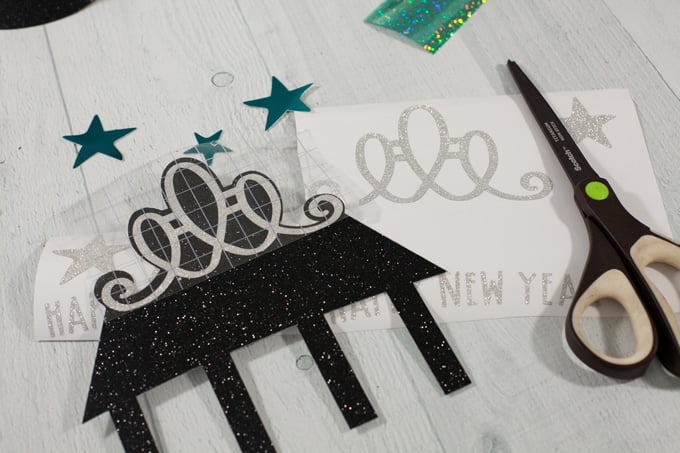 For the DIY New Year's Eve tiara, Use transfer tape to put the vinyl flourish and "Happy New Year" onto the black cat piece. 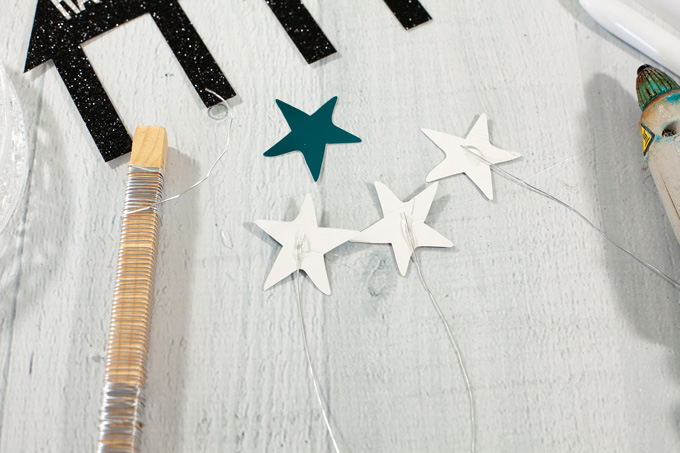 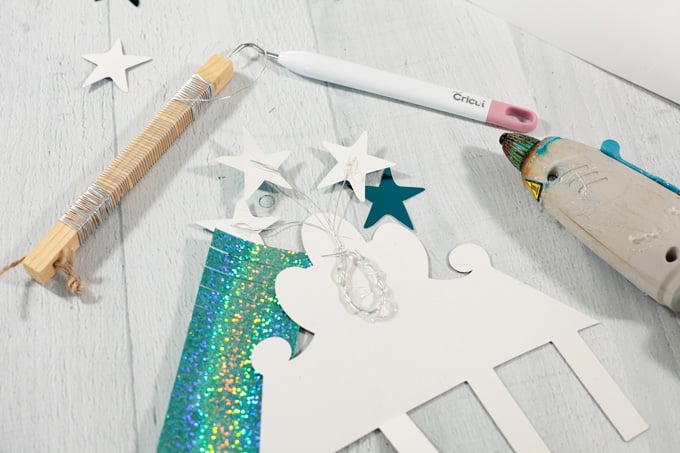 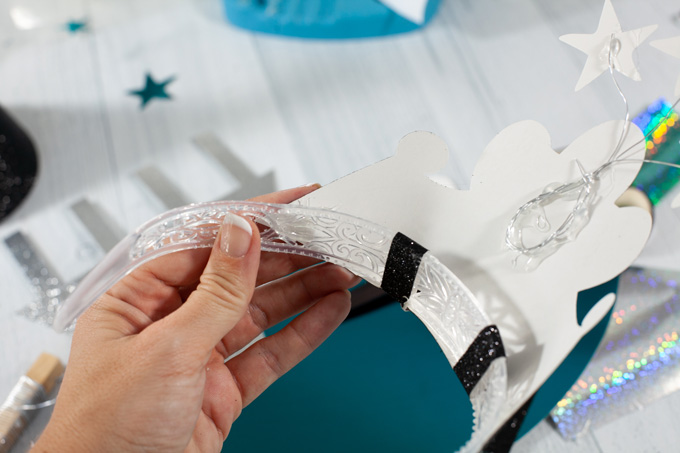 Julia Childs is known for saying ” a party without cake is just a meeting.” Stands to reason that if you’re throwing the kids party, you need to have cake. Use the pattern from the “Best Year Ever” t-shirt to make some cute cupcake toppers.

In the hours leading up until bedtime, keep the kids in a party mood with a few activities!

Start a new tradition of a time capsule that gets packed away with the Christmas decorations each year not to be seen til next year.  Help them jot down a few holiday memories and sign their names (because their signatures are so different year to year.) Put a few pictures of the outside of the house and their rooms and maybe a tiny present to themselves for the next year in the capsule, too. Put it all into a festively wrapped shoe box and dramatically seal it shut to await it’s opening when Christmas comes out again. 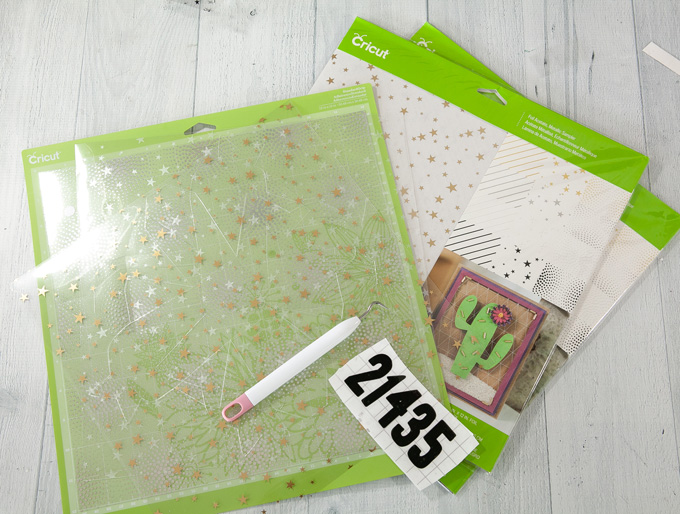 Open up the project file in Design Space and click "Make it." Place a sheet of the foil acetate on the cutting mat and feed it into the Cricut Maker machine. Place the Scoring Wheel into the machine. Choose "Foil Acetate" from the list of materials to cut, then your blinking C should appear! 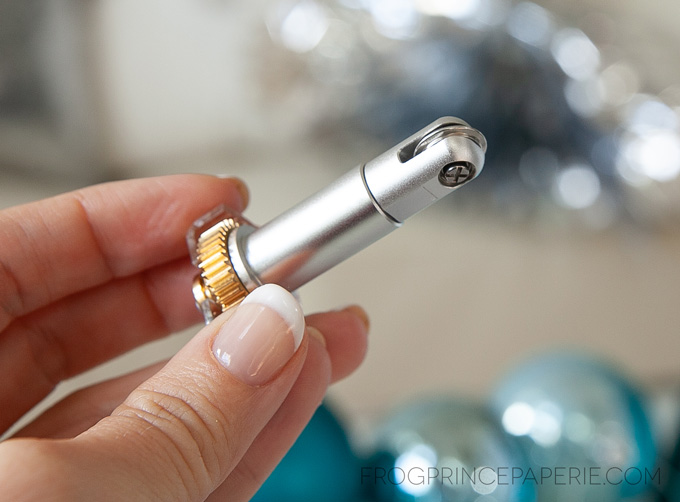 The file will first score the acetate with the scoring will. The machine will pause after it's finished scoring and ask you to change out the scoring wheel for the fine point blade. After you make the switch, hit the blinking "C" again and the box will be cut out. 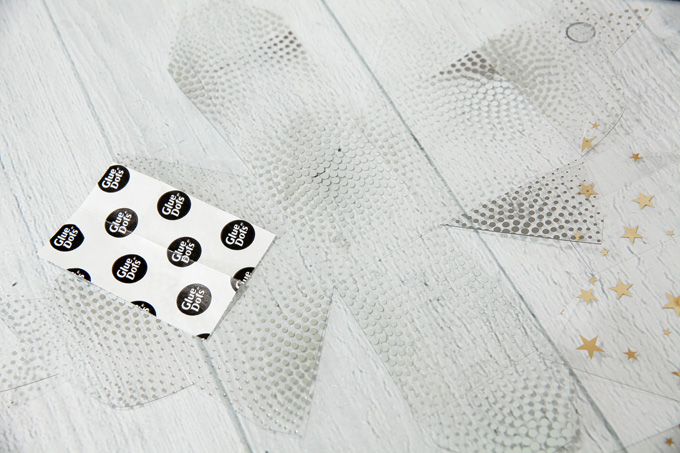 The acetate sheets actually have a clear film on them to keep the plastic from getting scratched up in the package. You're going to want to remove this before you fold it up.

It's going to be tempting to fold them up right away, but have to tell you it is much easier to put vinyl on a flat box than a folded one!

Keep the fine point blade in your Cricut Maker and cut out the vinyl numbers. Do as many or few of these as suits your party plans.

After you weed the vinyl, use transfer tape to adhere each number to each box. 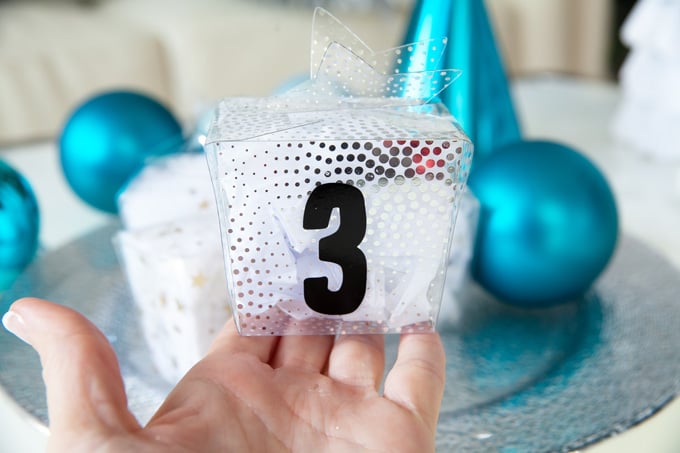 Now you can fold them up! I added a few glue dots to the flaps to keep the box together. Fill them full of treats or use these to play a New Year's Eve game!

As an Amazon Associate and member of other affiliate programs, I earn from qualifying purchases.

Set up a few boxes to be opened hourly with a funny activity in it (take a picture of your sister standing on her head, touch your tongue to your nose, do a creative interpretive dance to Bohemian Rhapsody, etc. etc.). You’ll have the chance to get really creative and I PROMISE your kids will love the chance to be silly with the family. See how to make these boxes below!

Watch the ball drop…in London. That staying up late thing is really not for me…I much prefer to be in bed at midnight. If you don’t care to see the very first minute of the new year in your time zone, opt to stream the ball dropping in London a full 6 hours earlier. Your celebration will be had, and sleep as well!

More than anything, if you have the chance to spend New Year’s Eve crashed out on the couch or crafting with your kids, take advantage of the together time and build a few memories! They won’t party at home for long!

This is a sponsored conversation written by me on behalf of Cricut. The opinions and text are all mine.

New Year’s Eve with the Kids