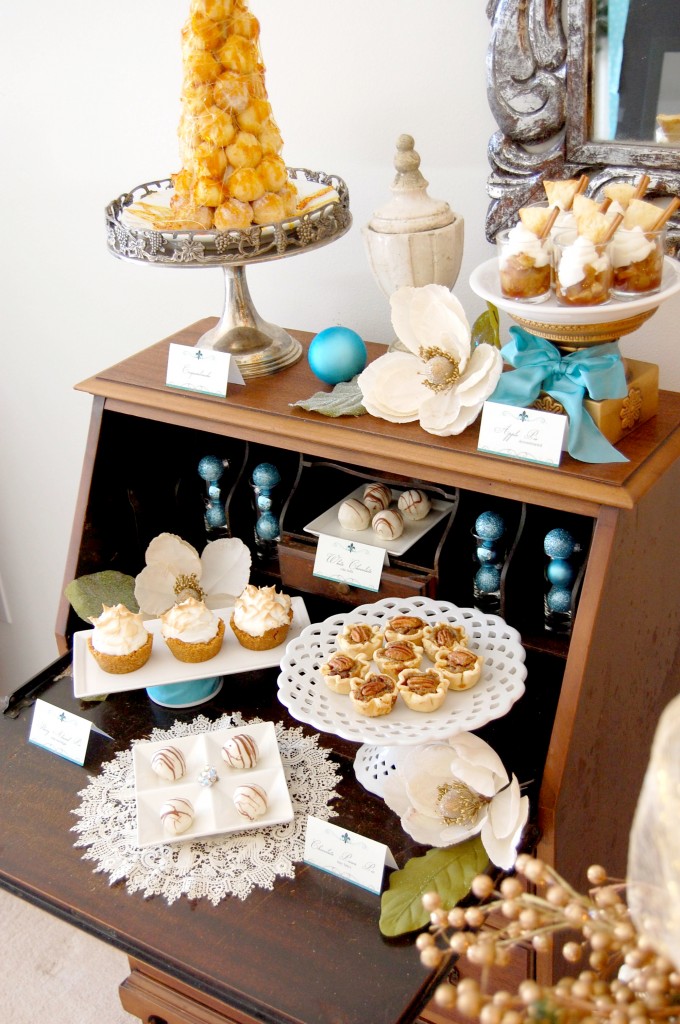 Finally- the last installment of the Joyeux Noel Dinner party. Just in time to make it all again for December 25th! I’m writing up my shopping lists today to start baking and prepping again. There have been a few comments about the extent of our menu; I do spend a few days cooking for this meal everytime we have it and have made it so many times, I have the cooking choreography down to a science. And just like so much of the holidays, preparing this meal is a ritual for me and I enjoy it!

The desserts displayed on the secretary are ones I usually make for our holiday dinners; I also usually do a from-scratch chocolate mousse pie that is nice and light after a heavy meal. But with the addition of the decorating, something had to give! Sometimes you have to know your limitations. These desserts are also usually made as full-sized pies. But I wanted to do something a little different and make these all in tiny servings so I made a few adjustments to the recipes. I’ll give you how to make them both ways in this post! 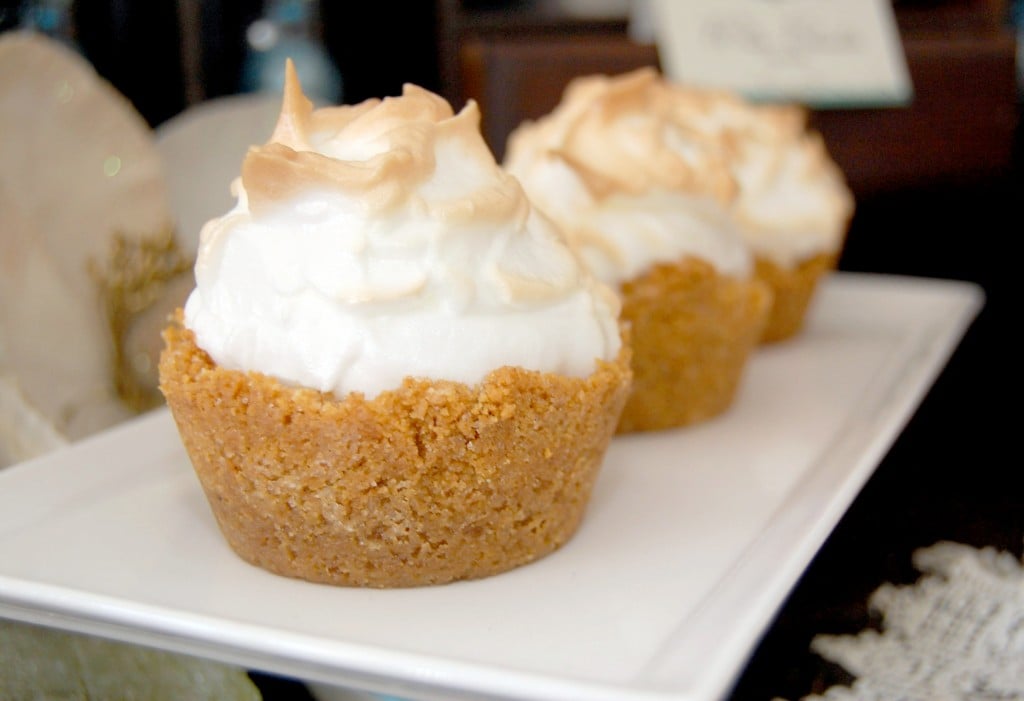 I am ever so grateful to Courtney at Pizzazzerie for debuting this party. I gave her the exclusive on this recipe, and you can find it here.  The recipe was created by my Grandmother, Lula Anita Leatherbury. Or as we call her, Grandma Nita. Did I mention I was from a Southern family?  This pie is unlike any you’ve ever had, and the flavors are so surprising, you’ll quickly add it to your go-to list. It’s a very light and fluffy pie, and pairs perfectly with a spicy meal in winter or as an airy finish to dinner in the summer.

I usually use rolled pie crusts from the grocery stores to make sherry almond pie, but with the amount of tiny pie crusts I was making for everything else, I decided to use graham cracker crusts instead for some variety.

Just mix these three ingredients together, and press into a muffin tin. You’ll have to use a small spice bottle or something similar to get the crust to compact to the sides of the tin; a spoon and my fingers weren’t enough when I did it – but maybe I was having an off day?? I baked the tin of crusts at 350 for 8 minutes to set them as I wanted to be sure they would be easily removed from the tins. I then placed them in the refrigerator to cool.

After the crusts were cooled, I filled them with the sherry almond mixture and put them back in the fridge to set. Some time later, I whipped up some meringue for topping…

Beat your eggs until frothy, then add the sugar, continuing to beat until stiff peaks form. Add the flavoring last! Spoon onto your pie or (pielettes) and spread to the edges to seal the filling in. Bake at 325 degrees for 15 minutes until you get those gorgeous brown peaks.

With the sherry almond filling, you’ll want to put these immediately back in the fridge. After an hour or so, use a fork to gently pop them out of the muffin tins and serve! 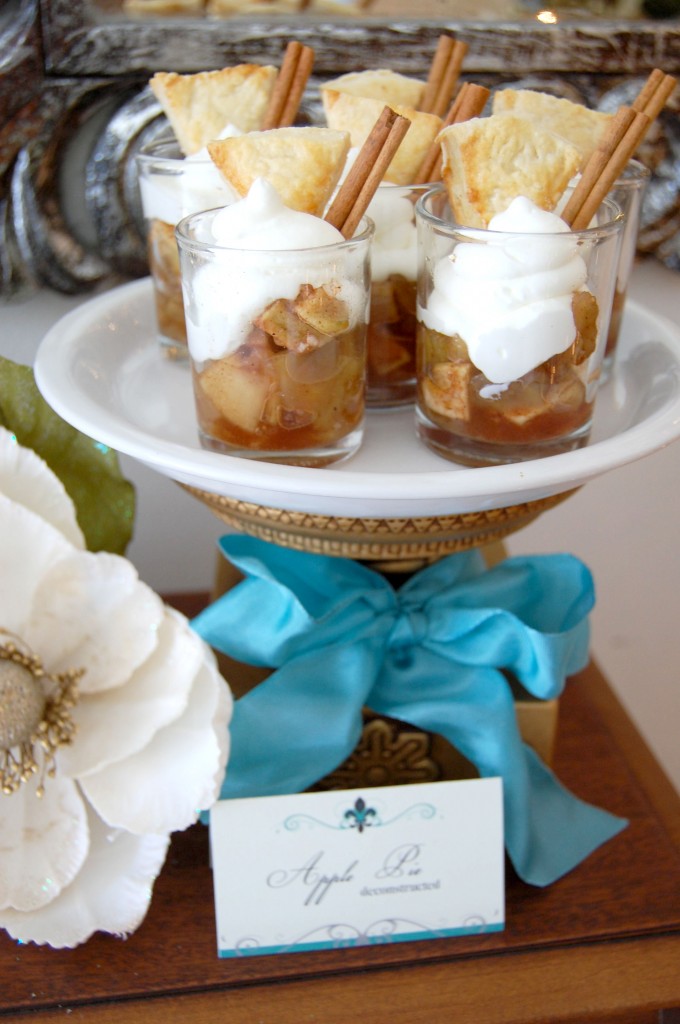 Holiday meals are about tradition, and I do have another side to my family; they are from Michigan. This apple pie was passed down to me from my Grandma Catherine, and I learned to make it from her standing by her side in her farmhouse kitchen. Nothing was ever written down; we just did it. Every time I make this pie, I want to try all the fancy pastry shapes and designs I see around in the top of the pie, but every time I can’t bring myself to and cut the same wheat patterns Grandma did into the crust.

The key ingredient in this pie is a nice, tart apple. Grandma had an apple tree behind her house that had perfect apples and gave any pie that came from her house a distinct flavor. Granny Smith or a less tart apple with a touch of lemon juice will make due for those of us without fabulous apple trees in the backyard. These measurements are approximate; so a little more or a little less of everything isn’t going to hurt the end result.

Mix apples, sugar, cinnamon, nutmeg, and tapioca mix in large bowl. Pour into unbaked pie crust. Place second pie crust on top, and cut several holes in top to let out steam while baking. Sprinkle sugar on top. Bake at 350 degrees for 1 hour on top of a cookie sheet (will save cleaning the oven later!)

For the dessert display in the Joyeux Noel dinner, I skipped baking in pie crusts, and just put the filling in a 9×9 pan and baked it. I cut wedges of pie dough, brushed on some milk and sprinkled some sugar over them and baked them until done. I put the apple pie filling in votives to serve, topped with fresh whipped cream (1 cup heavy whipping cream, 1/4 cup sugar, beat until stiff), a cinnamon stick and a pastry wedge. This looked a lot harder than it was to make! 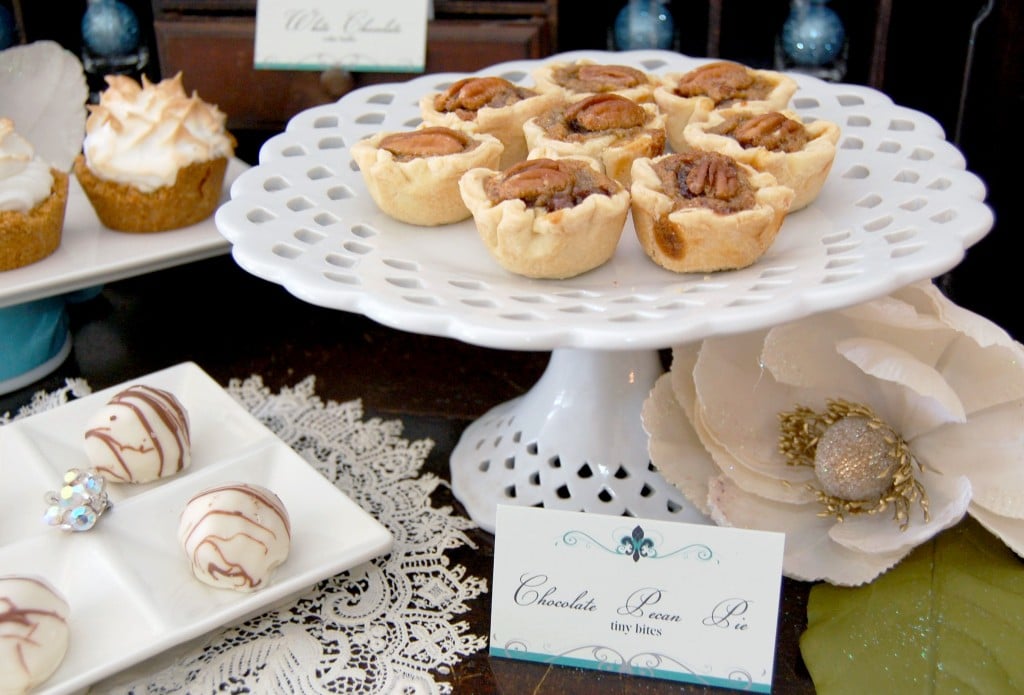 To make the tiny bites for these, I cut circles out of the pastry dough and put them in mini-muffin tins. You’ll need 2 to 3 pie crusts if you do it this way. I mixed the filling as below, but left out the pecans. I placed a whole pecan in the top of each bite to finish and put them in the oven!

Preheat the oven to 325 degrees F.

In a large bowl, mix together the sugar and the flour. Add the eggs, hazelnuts, chocolate chips, corn syrup, butter, vanilla, and salt. Stir well. Pour the mixture into the pie crust. Bake for 1 hour. 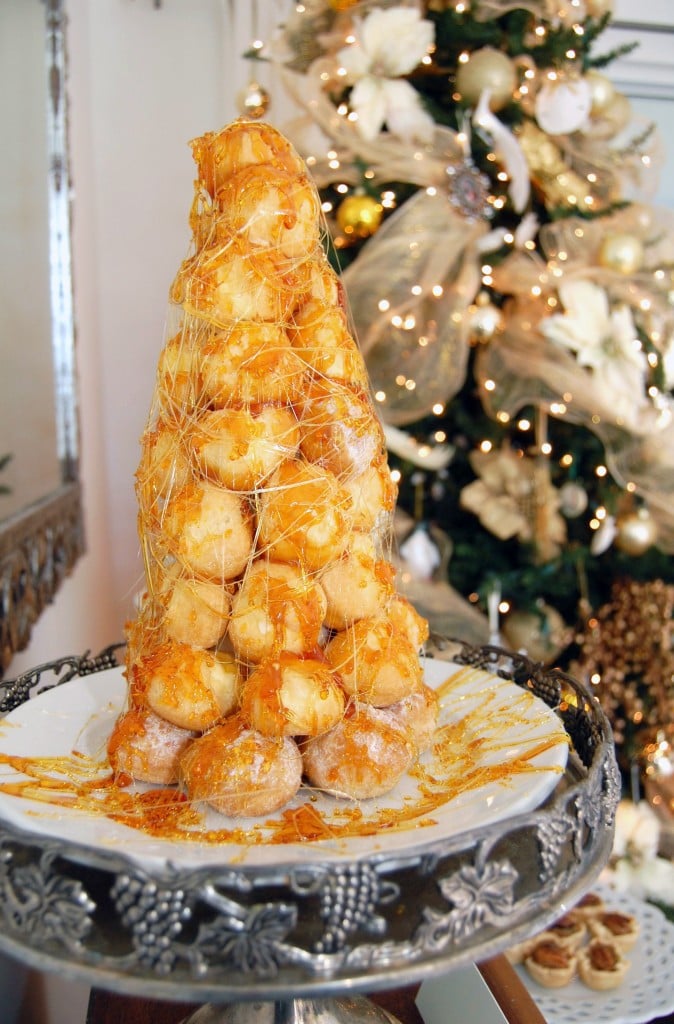 The french meaning is “crunchy in the mouth” or “will burn your fingers beyond belief.” Found that one out the hard way! This is such a beautiful dessert, though, it is worth the effort. I do have to make a confession … I actually made a cheater’s croquembouche. The thought of making all those tiny pastries and then filling them made me want to throw in the towel before I started. While perusing the frozen food section, I spotted pre-made cream puffs…and that sparked an idea! You’ll need about 80 or so of these puffs to build a decent size croquembouche.  Then all you  need to do is add the caramelized sugar! I adapted this from a recipe I found on Food Network.

Put the sugar in a saucepan (something not so large it won’t be difficult to reach in and dip your cream puffs) and make an x in the sugar. Pour the water in and allow the water to slowly soak into the sugar. Boil the sugar water until it turns a light golden color – no stirring necessary! Once it’s the right color, place the saucepan bottom into an icebath to stop the cooking. Dip the puffs in the caramel (CAREFULLY!) and place them together to form a circular base and keep building the circles of puffs smaller and smaller to form trees.  The caramel hardens as you go and gives it structure. Drizzle your croquembouche with caramel all over. You have the option of adding decorative elements at this point like flowers and sugared nuts and other sparkles, but I thought it was pretty as is!

Thank you so much to everyone who has visited this thread of posts – it was so fun to share a few of our family traditions and some family lore to boot. And stop by the Etsy store to check out the printable for this dinner; the proceeds from the Joyeux Noel collection are going to the Alzheimer’s Association! Are you using the pre-made cream puffs that have a custard filling? Is it safe to assume then that you have to store this in the refrigerator until serving time?

Also, a question about the Pecan pie..you said you left out the pecans in the batter and topped it with a pecan instead. The recipe calls for 1-1/2 cups of hazelnuts....was that suppose to be pecans? It also says to bake the mini- pecan pies one hour. Could that be a time for a whole pie and not the minis?

I love your sharing and the pictures are excellent and the recipes sound great and are "must dos"....thanks so much. (Could you email me the answers please. Again, thank you.

I love your page. Your dessert are very pretty and special. congrats...

I've never made croquembouche, but your recipe doesn't scare me too much with using the frozen puffs!

I don't usually go for commercially prepared pastries, but (confession here) I LOVE those pre-made cream puffs! I love the idea of using them for a croquembouche, which I've always wanted to make.