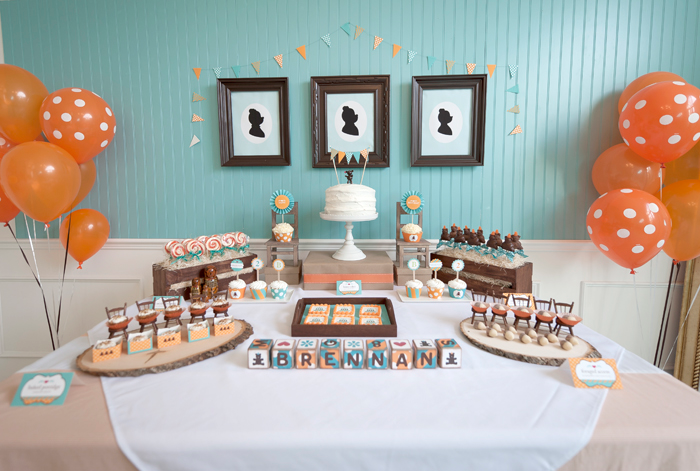 The bed shaped table and the treat table were the big focal points for the Goldilocks party. Lots going on elsewhere, but these were the parts of the party that really caught your eye! To keep with the “bear” theme, I tried to keep everything bear shaped or related to something a Goldilocks bear would eat. 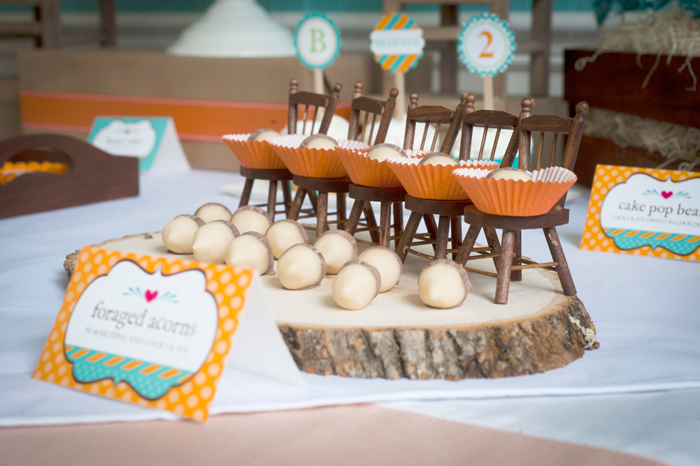 The acorns that the bears went and foraged from the forrest floor for their party guests were made of marzipan. And the little cute chairs they are sitting on? They are doll house chairs bought at Hobby Lobby and stained to match the party table.

To make acorns: Purchase marzipan at the grocery store. Roll the number you need into like sized balls (work quickly, it will harden!) And then shape the like-sized balls into acorns. To give them a little cap, dip the end in chocolate and add a stem with piped chocolate after the cap has hardened. I didn’t know if the kids were really going to care for these, but we couldn’t keep them from swiping them off the table! 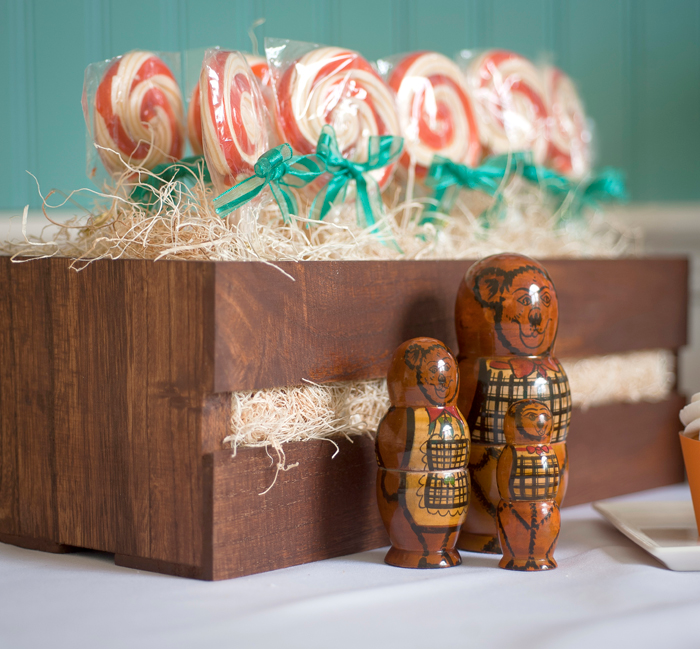 I’d be lying if I said every facet of the party turned out exactly as I had planned…I was in the process of collecting bear toys for baby bear’s toy box for a kid’s activity and ran out of time to see that one through. I had some neat items like these three bear matryoshka dolls that I put on the dessert table instead for a little interest. The crates my husband was nice enough to stain for me, and the lollipops are all natural (even the coloring!) from Hammond’s Candies. 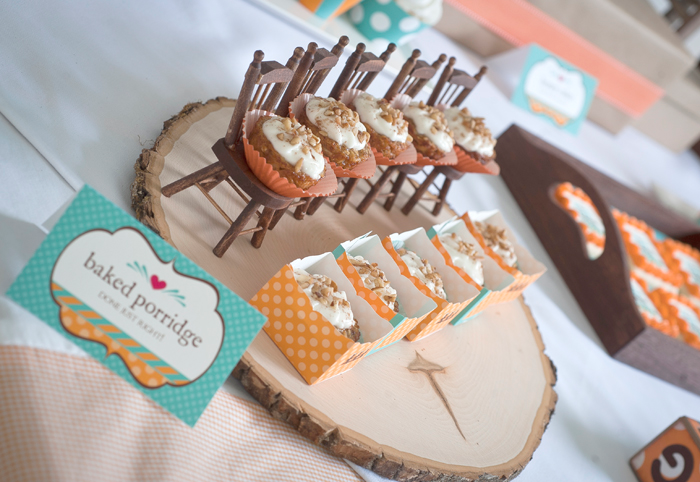 My favorite part of the whole dessert table was the “Baked Porridge.” Yes, I put oatmeal on a dessert table. Baked oatmeal is actually a super yummy breakfast dish that my family LOVES. It’s even good cold and is a little cake-like in consistency. I gave this a test run several times over and discovered it held its shape quite well in mini-muffin pans!! It turns up a bit drier than if you baked it in a pan, but still excellent.

To serve, I  placed in mini cupcake wrappers and designed up these special little bon-bon holders in the bear theme. They’re great plain or with a dollop of frosting, sprinkle of cinnamon and some nuts (if you don’t bake them in!)

Mix all ingredients and pour into a 9×12 pan and bake at 350 degrees for 40 minutes or until you shake the pan and the middle is set. 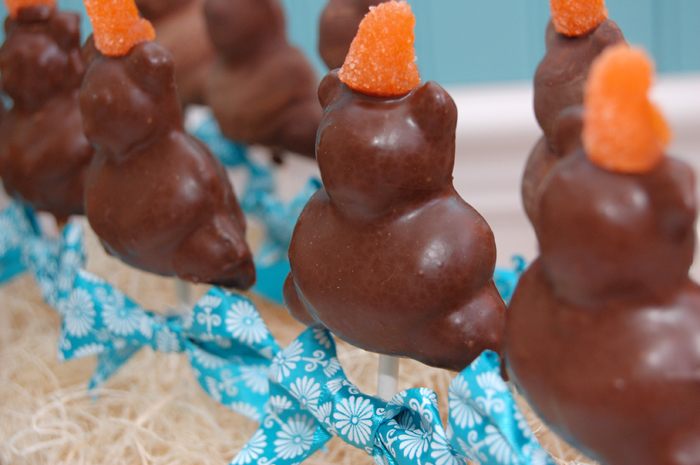 The bear cake/brownie pops I seriously tried to have someone else do. But the weather was warmer by beginning of March already, and I wasn’t looking forward to chancing a melted box of cake pops showing up at my door. On to plan B. They make a really neat bear shaped pan to bake individual bear cakes in. I found cake didn’t really hold up all that well in these, and tried a cake-like brownie instead and they were fabulous. There was a pan of bear shaped brownies (extra yummy because they were crispy all the way around!) on the adult food table, and these that got put on sticks, dipped in chocolate and topped with a little gum drop party hat. 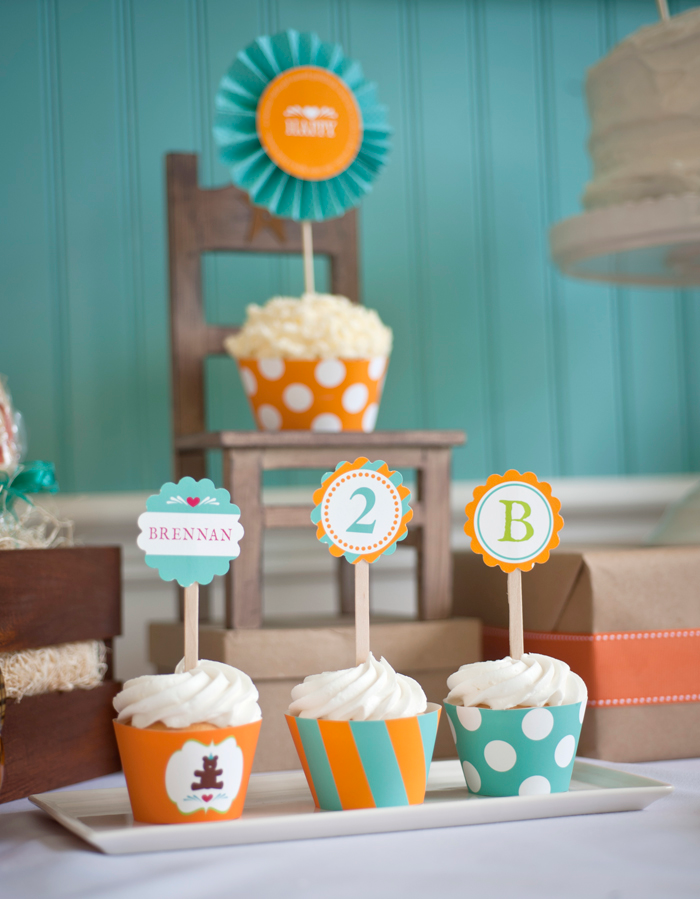 And here is my dirty little party secret. I almost never make my own cupcakes anymore. The grocery store does such a great job, and the time savings for me is well worth buying them. I usually request them plain or with a specific frosting tint and then add my own sprinkles. Here, I just forgot! They also sell the giant cupcakes that are sitting on the big chairs. This one was filled with lemon creme. YUM. 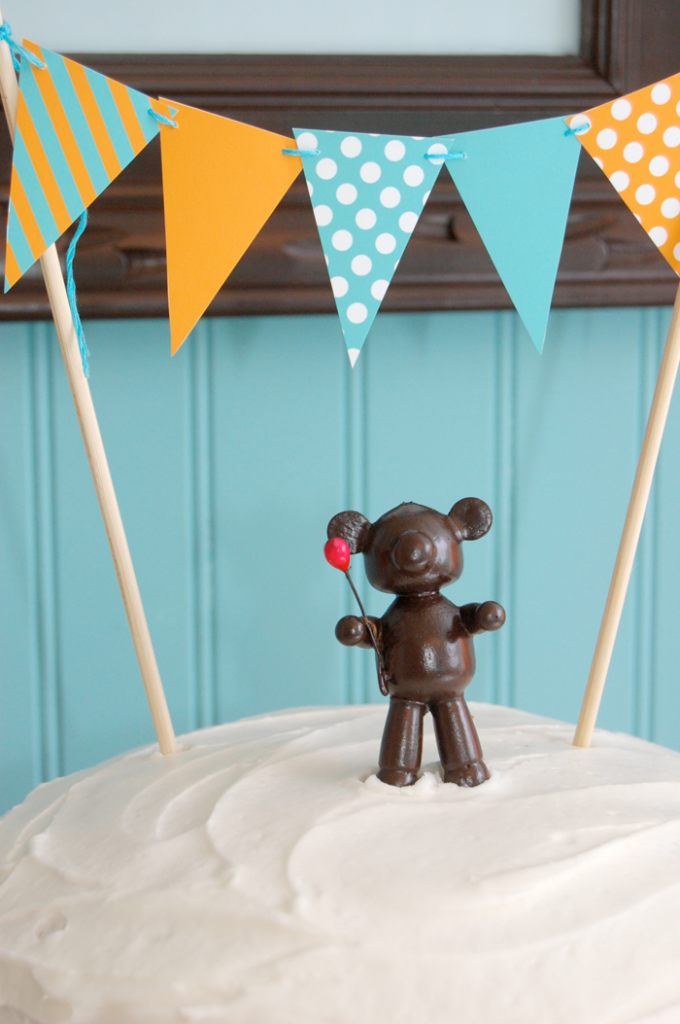 Grandma came down for Brennan’s party, and I assigned her the task of making the birthday cake. A big ornate fondant cake would have looked out of place, so we opted for something that looked truly homemade. A great big honey cake that was just right for the bears! The topper was more difficult to come by than I thought it would be; I was looking for a clothespin doll bear, but could not find one. Instead, I found a German wooden bear christmas ornament and did some surgery.  And of course, spray painted. The bunting I sewed together out of a few triangles of paper (the bunting on the cake and above the silhouettes does come with the three bear party set!) 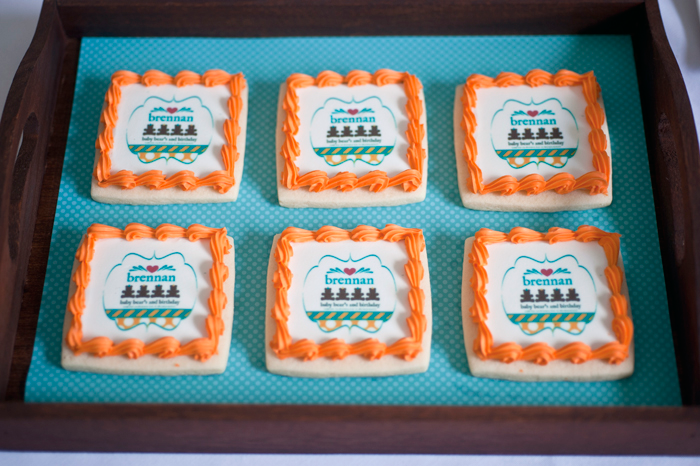 Allyson Jane made some delicious sugar cookies to match the bear theme. 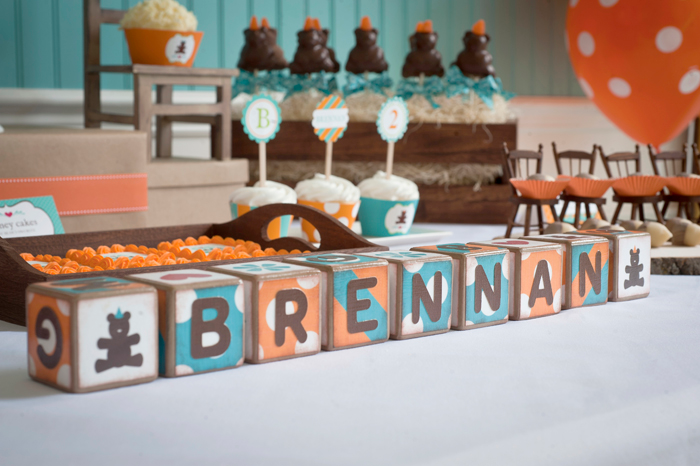 Laugh LOUD Smile BIG graciously sent these gorgeous blocks to originally be part of the toy box. They were too cute to put there, so I put them on the treat table instead. Talk about just right! The blocks ended up being that perfect little something extra. 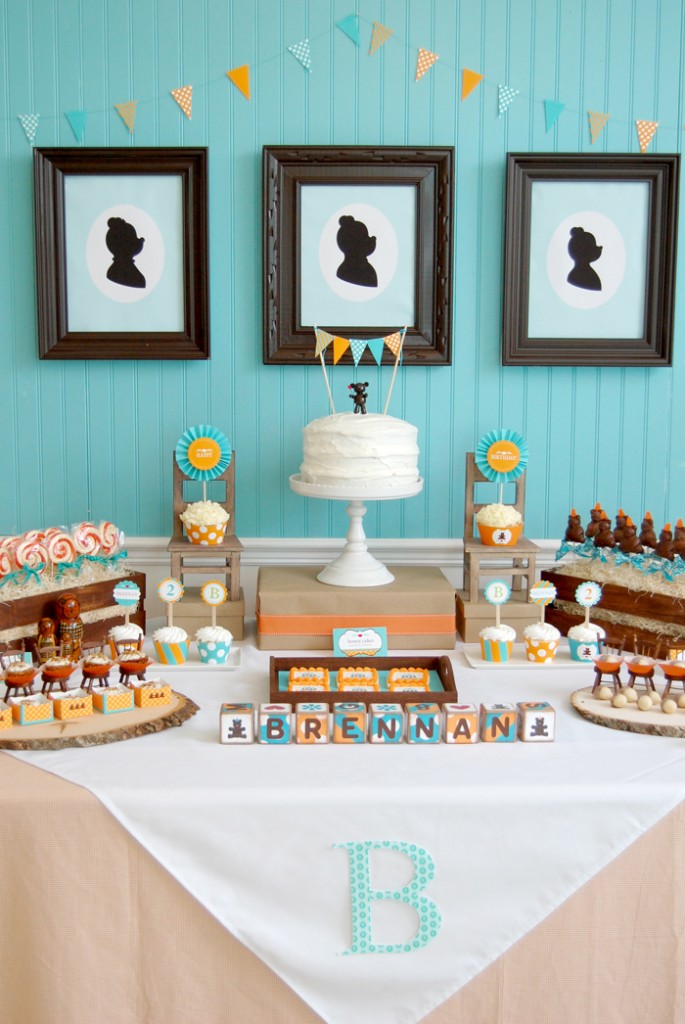 I’ve gotten more than a few comments about the blue bead board in the background of the table. The bead board was the very last resort for the backdrop, but I truly could not be happier with the way it turned out. (In fact, I liked it so much, it is still up on the wall!!) There was no fabric or wrapping paper that I could find that I liked well enough for a backdrop. I contemplated just some painted plywood, but we walked by the bead board while we were trying to find it. One 8′ sheet cut in half (by Home Depot) was enough for a back drop. I painted it with a Martha Stewart teal and tacked it to the wall with a little finishing nail in each corner. It was PERFECT, and I can easily reuse the wood for another event at a later date.

The linens were specially sewn for this table as well. It’s amazing what a difference a good tablecloth makes! This was a small check orange gingham with a white square cloth I appliqued a “B” onto. And when I say applique, I mean stich witch. There was too much party to finish to get it all sewn on! 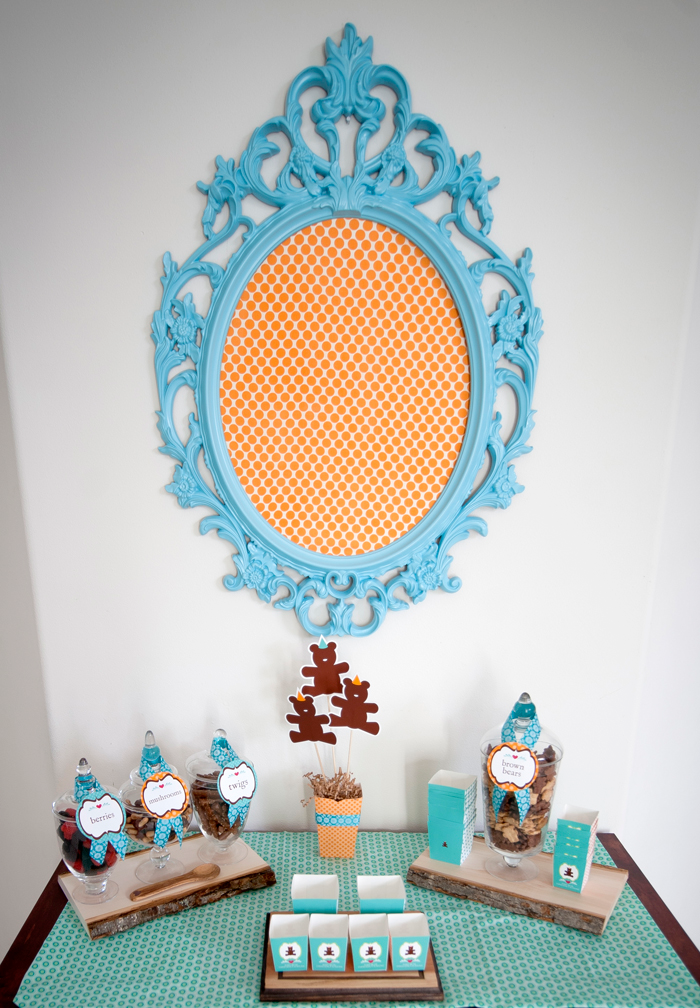 This table wasn’t planned until the day before the party. It was all supposed to be part of the big table, but didn’t fit quite right, but as luck would have it, where it ended up was such a better idea than the original. The jars say “Berries,” “Mushrooms,” “Twigs” and “Brown Bears.” That’s bear code for candy raspberries, chocolate capped mushrooms, pumpernickel pretzel sticks (all from World Market) and Teddy Grahams. These were all at kid level and they got a real thrill out of filling up their snack cups with little treats. At two, they were a little short to see past the oatmeal and the marzipan acorns on the dessert table, so a table at their level they had free reign to dig into was great!

And with that, I’m done with all the Goldilocks posts! If you’ve jumped in at the end, here are Part I, Part II, Part III and Part IV. Thanks again to everyone who truly made this party a success, and for all the wonderful and heart warming feedback it has received; it makes every minute worth it!

Thanks for checking out my {Real Party} Goldilocks and the Three Bears Part V post. Check out my full collection of birthday articles, and also get more Birthday Party Ideas by Michelle Stewart, Liz Call, Tammy Mitchell, Randi Dukes and Mariah Leeson.

{Real Party} Goldilocks and the Three Bears ~ Part I This is one of my favorite parties ever! I hope you don't mind if I link it to my facebook page. :)

I have been looking at children's parties for about 4 years straight...I think that this takes the cake (oatmeal) for the best! Amazing details, colors, design, ideas...just amazing!

i can't get over how much I love everything on the table! Thanks for sharin the recipes and ideas!!!

Paula... You are getting better and better! I am looking forward to seeing what you come up with next! Jill

(I only wish I was closer to see them in person)