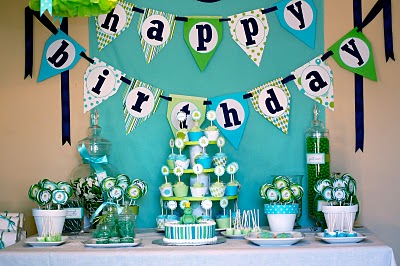 I read somewhere not too long ago in some brilliant woman’s blog that when you throw a party, you just have to have a single element that is really a “WOW” factor that you spend time making perfect. Just one impressive feature – I think anyone can do that! Candy buffets are “in” right now for parties and weddings, probably because of the visual display that is a treat for the eyes (and later the tummy!)

The detail that was probably the most difficult about putting the buffet together was the glassware. Dropping $200 on jars was not in the birthday budget, so i bought one really spectacular jar and got creative with the rest! Here are my sources: 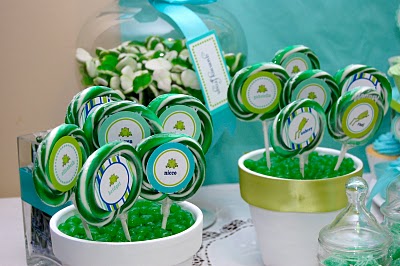 I just loved the way lollipops looked standing up on a tablescape. I didn’t have anything handy to put them in, and didn’t have the time to build something elaborate. So, I took a few terra cotta pots, painted them white, and stuffed a wax paper covered piece of floral foam down inside. After cutting holes in the wax paper, I pushed in the suckers and covered the wax paper with jelly beans. The lollipops were personalized for each guest attending the party. 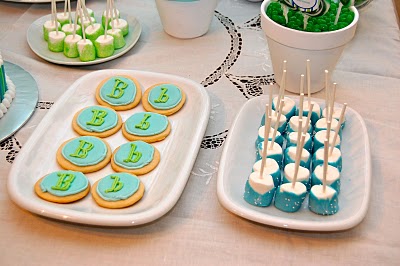 In addition to the candy, I did make some monogram sugar cookies, dipped some marshmallows in candy melt and rolled them in sprinkles, and dipped a few oreo cookies as well (man, were those good!) Kids seem to love everything on a stick, so the marshmallows were really a hit! There is a tutorial on how to make these here. Those that weren’t coated in candy were rolled in sugar. Just dip them in water really quick, shake off the extra droplets and apply the sugar. 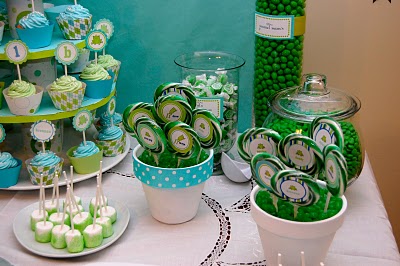 Each one of the candy jars got a label showing what it was. I forgot to get scoops for the candy, and bought a melamine ladle instead. This actually worked out better, as it was much easier to get in the tall jars with the ladle.

The big question I keep getting asked is, “Where’d you get all that candy?” Where I get everything. Online! There was a really good selection of green candy at the Candy Warehouse; I scored big lollipops, gummy frogs, old fashioned candy sticks and mojito flavored salt water taffy. The green M&Ms were around during Valentines Day, and I just stocked up then from the stores in town. 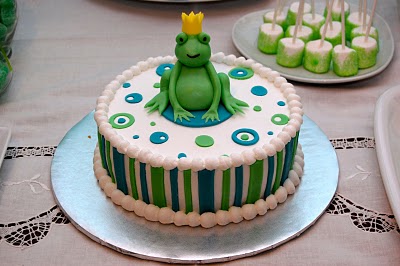 The smash cake was made by a good friend of mine who lives three hours away. I was happy someone was able to transport it to the party for me! It turned out so neat! 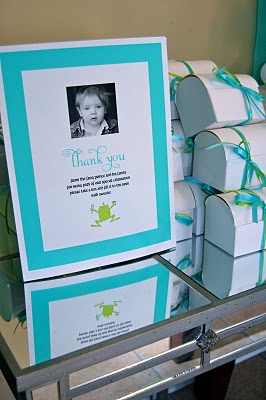 The candy buffet was more a party favor at our event…guests were given a box to fill up with candy before they left as a thank you for coming. Next time I would definitely get bigger boxes, as there was still a lot left over even with 20 kids at the party. It was a nice memory for the kids, as they were all pretty excited about picking out all that candy! I love the idea! I am doign this for my little guy's 1st Birthday Party, any ideas for table centerpeices? I will have about 5 rectangular tables. Thanks.

I love this frog prince theme and all your decorations!! I am doing something similar for my sons first birthday. I am trying to find the plastic frogs you used on the kids table to decorate it. Where did you find them?

Love the frog standee greeting the guests! I am doing a frog theme for my 2 year old this May, can you provide instructions on how to make one?

Thank you so much! My nine month old will be turning 1 in April and I wanted to do something sweet but fun! I'm going to use all of your ideas...even the photobooth. I usually hire a photographer for the birthday parties (I have found that it is not that expensive and that way I know there will be pictures - I might even be in a few! :0) ) We are having the party in our previous hometown because we just moved to a new town and all of friends are in the old town. A friend has offered up her house. I just need to figure out the seating! Thanks for sharing your ideas!

The fat little frog on the top of the cake is soo cute! Love the color scheme too. My problem with creating a sweet table like this is that my kids wouldn't touch half the stuff on it (they don't like sprinkles, marshmallows, taffy or lollipops) and the moms coming to my party would probably prefer their kids wouldn't touch it either! though the dentists will be thrilled ;) I would love to see more treat tables that incorporate less sweets, does that make sense?