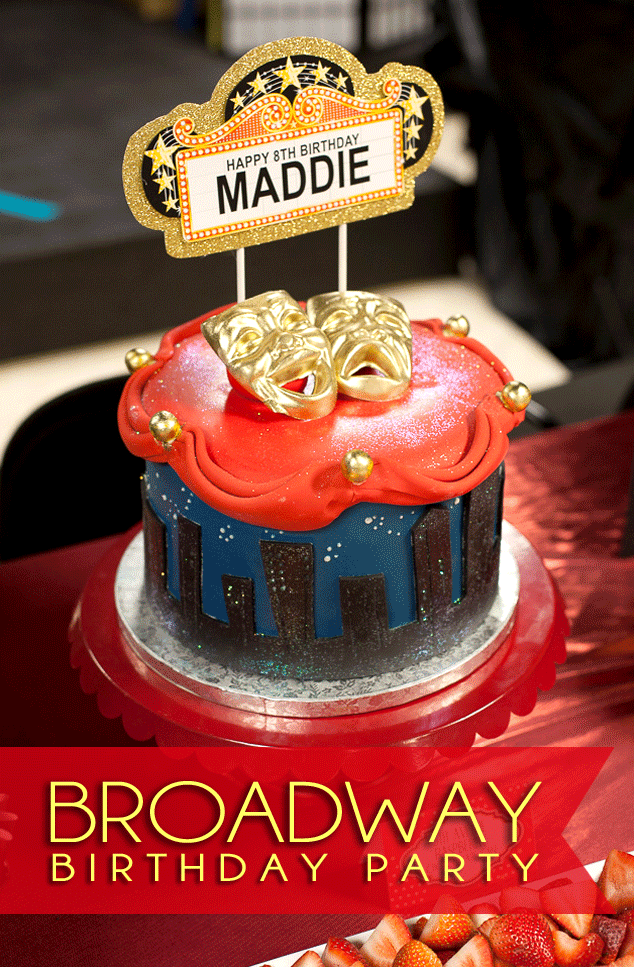 My daughter. I love her to pieces. But she’s definitely inherited a few (ahem) dramatic qualities from her parents. (Ok, really, just from me…my husband is as undramatic as they come.) Lucky for us, we have a fabulous budding acting school around the corner, The Viera Studio, where we can channel all that dramatic energy! When Maddie’s birthday came around this year, there was no question, it was going to be a Broadway Birthday Party, and we were absolutely having it at acting school. 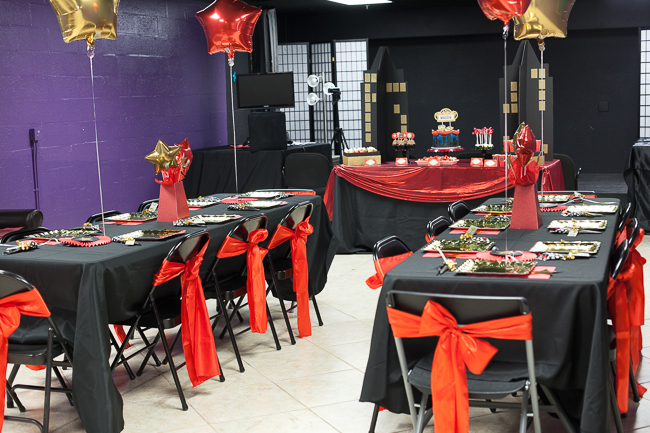 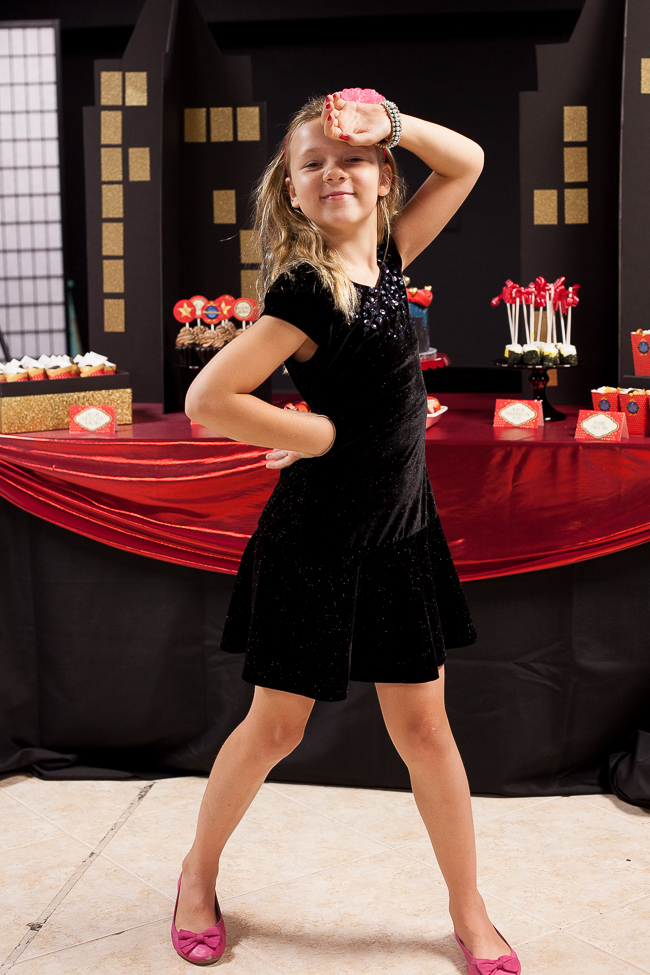 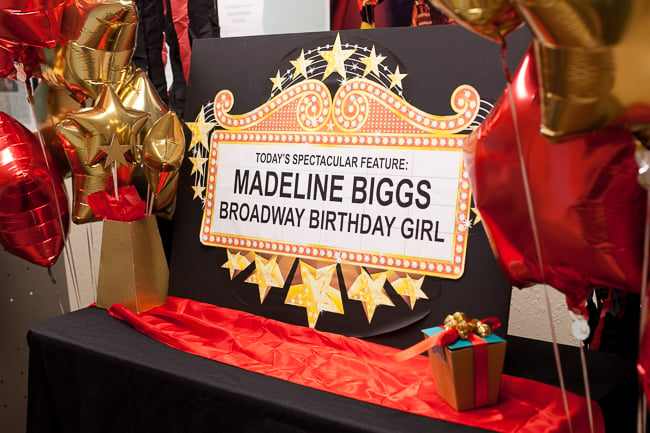 Location birthday parties can be harder to pull off than a home party, but if everything is kept fairly streamlined you can get a lot of flair and keep the setup time to a minimum. This party was set up in two hours – and the birthday girl (who had this Wish party) said it was her favorite EVER. 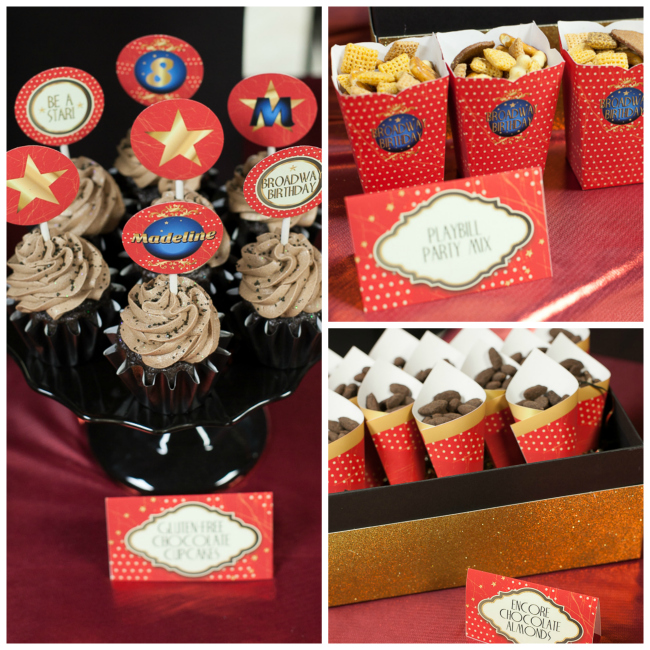 The party was timed it so the kids weren’t going to be there during a meal, so only cake and snacks made it to our Broadway birthday party stage. The food was kept very simple: roasted almonds (like you find in the theater), snack mix, a tray of fresh strawberries, some gluten-free cupcakes, marshmallow pops and that gorgeous cake you saw at the top of the page. It was plenty! The food was decorated with a few printables from the Frog Prince Paperie Etsy shop. 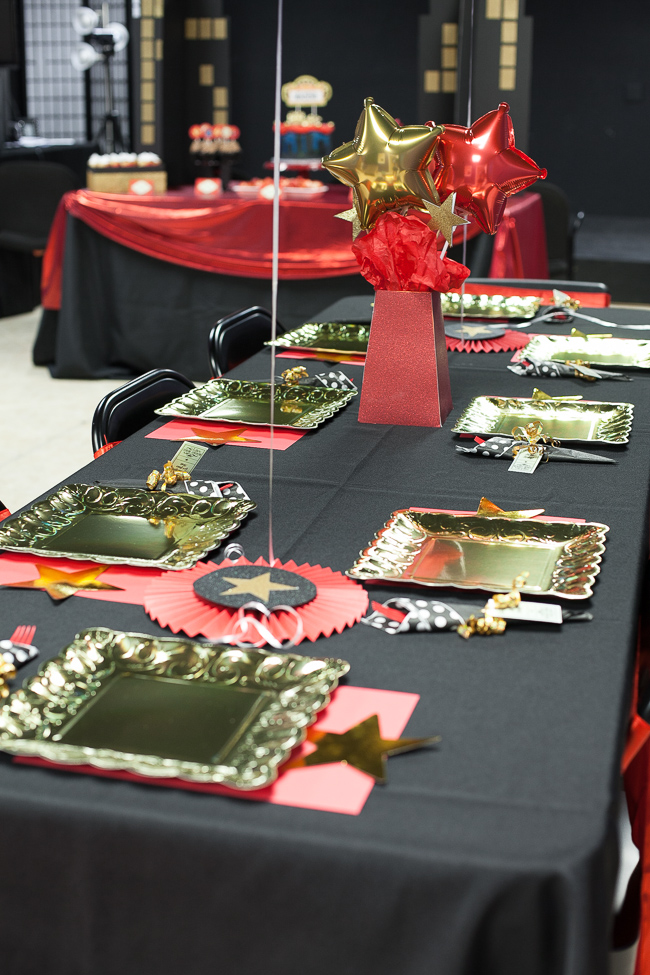 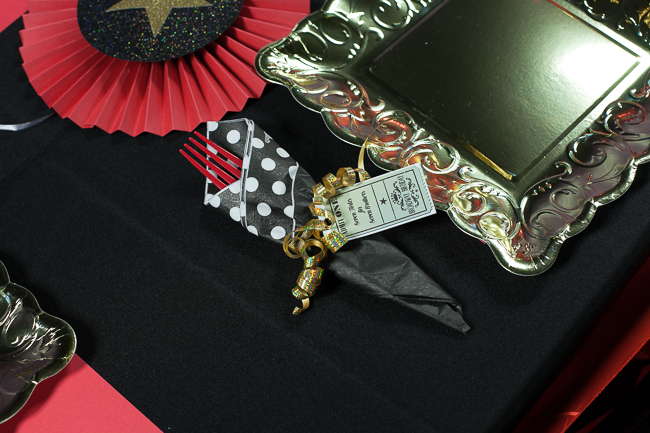 Since the space the birthday cake portion of the party was in was already so predominantly black, the party colors were based around where we were having the event and we threw in some red and gold as a nod to those Broadway theater curtains. I found gold paper plates in the store (like these at Amazon), and added simple card stock and gold star placemats underneath. Balloons from the dollar store decorated the tables; the name of the game here was EASY! 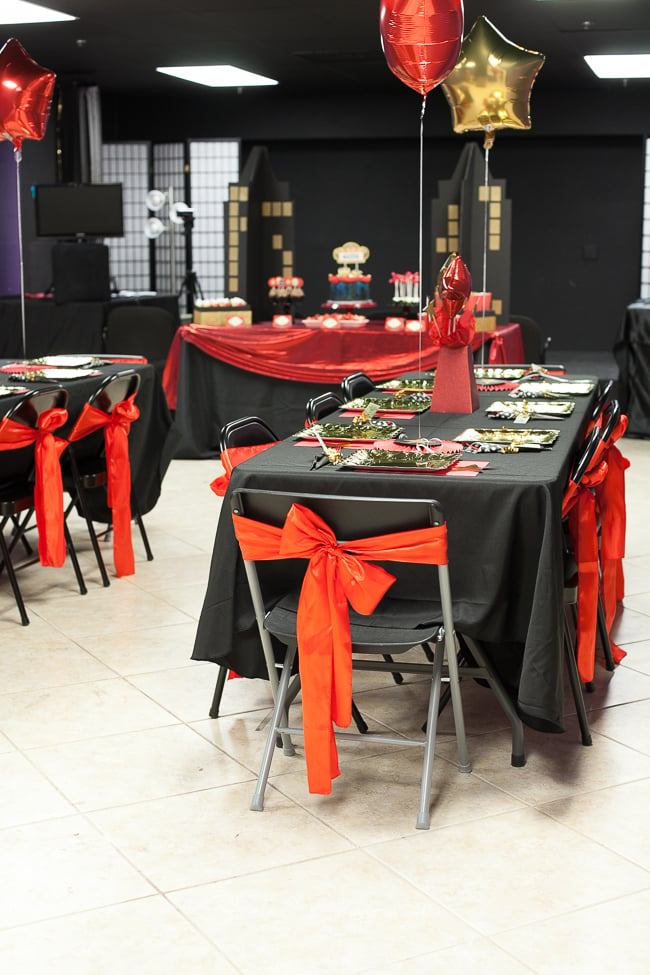 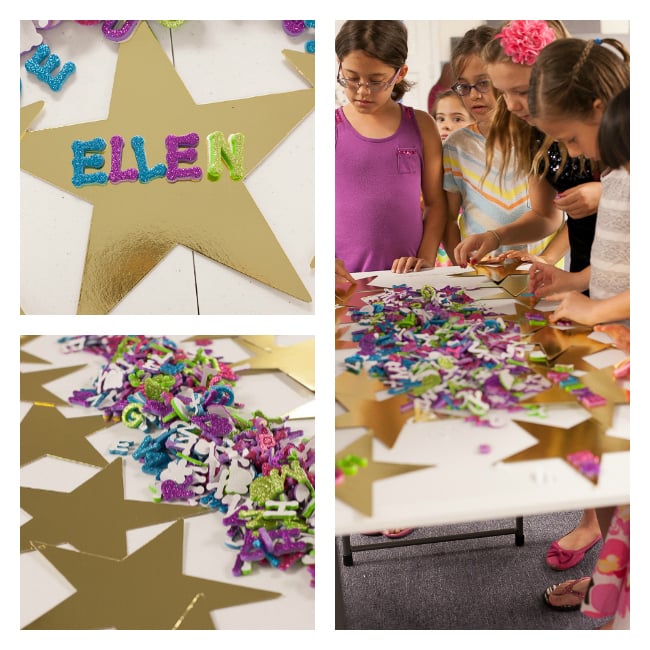 Before we even made it to the food part of the afternoon, we had a dozen kids to keep entertained. As everyone filtered in, we sent them to make stars for their dressing rooms. A pile of sparkly sticker letters (buy them here) and a some pre-cut 9 inch gold stars kept the crowd busy until all our guests arrived. 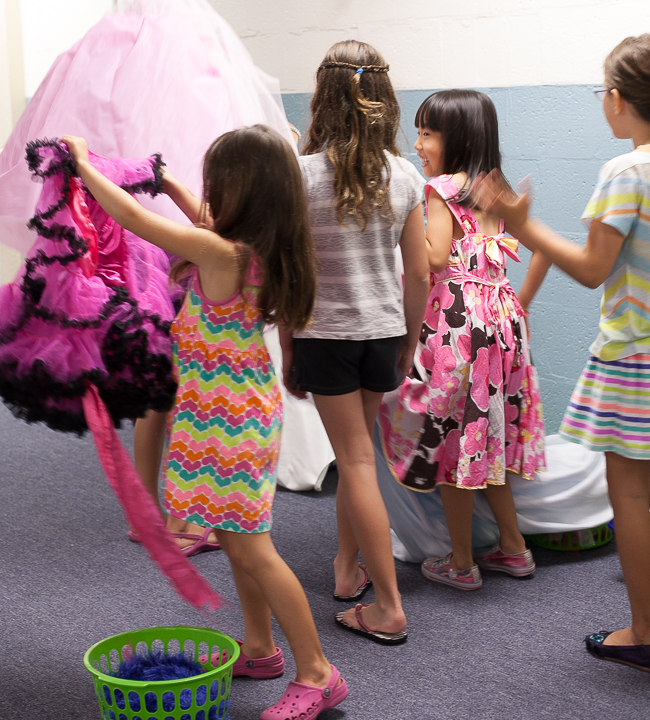 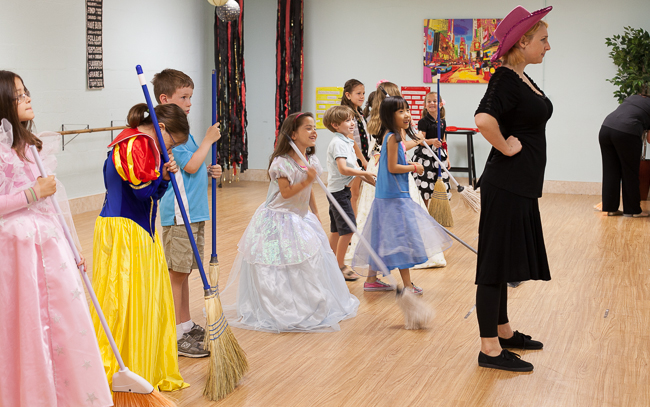 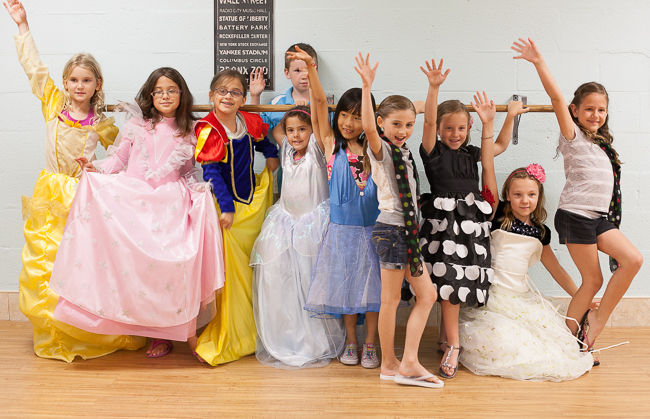 The kids were let loose on all the costumes in the studio to dress at they see fit. Even if that meant wearing four costumes at the same time. My daughter’s favorite musical is Annie, so they learned “It’s a Hard Knock Life” complete with choreography and brooms. It was pretty impressive what a skilled teacher and 45 minutes can do! 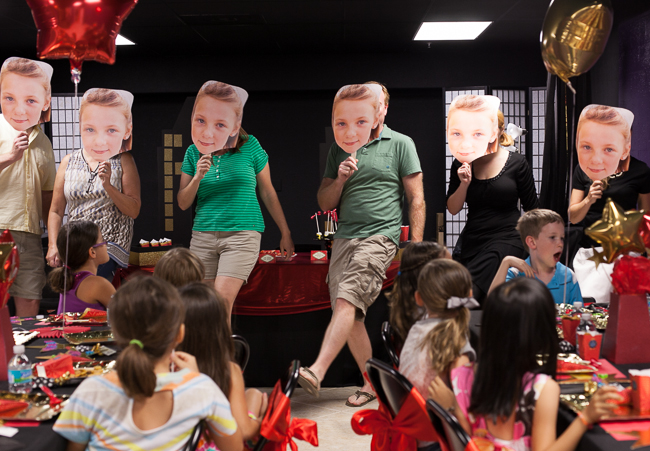 And because I think it’s a parent’s duty to truly earn all those therapy sessions their kids will have later in life, I had a little Broadway Birthday Party surprise for Maddie. The parents came out and did their own Broadway number complete with kick-line, off-tune rendition of “Happy Birthday” and giant Maddie heads. She was completely mortified at first (my work here is done!) but then she thought it increasingly funny as the show went on. (Good thing she has a sense of humor!) 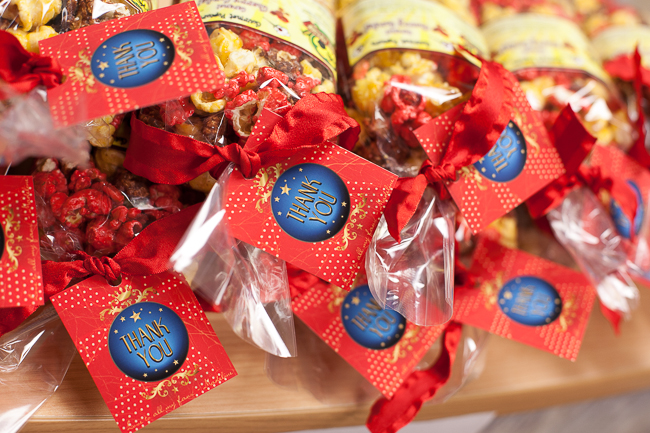 After a little more free play and freeze dancing, the kids were sent home with some specially-made gourmet popcorn in the party’s colors from the Tin Roof Popcorn Company. Popcorn and theater just go together! 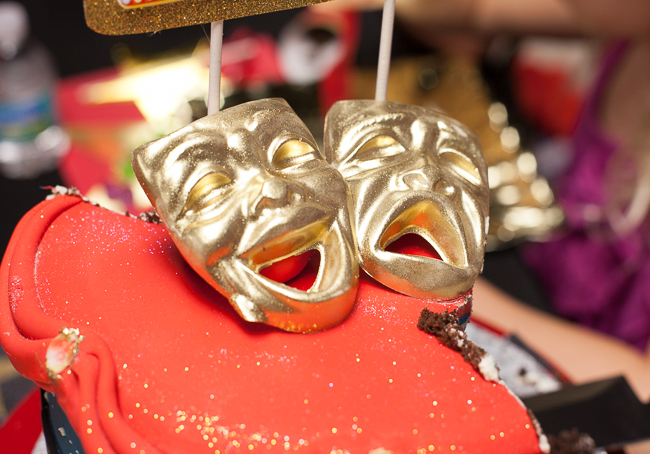 Easy set-up, easy take down, and the birthday girl couldn’t have been happier. It’s what I call a successful event!

Plan a Broadway Birthday Party of your own! Pin this for inspiration later! Hi where did you get the sign with her name? So cute

I designed it! I would be happy to sell you the file for the printable--just shoot me an email at paula (at) frogprincepaperie.com :) Look forward to speaking to you!

It looks like everyone had a blast!! This would have been a party that I would have loved to have! I was always big into drama. Thanks for sharing!

My pleasure, Cheryl! My kids are both big into drama as well--it ended up being the perfect theme!

It doesn't look simple, it looks gorgeous! What a great party.

Thanks, Geri! It was put together so quickly, it felt like one of the easiest parties I've ever done!